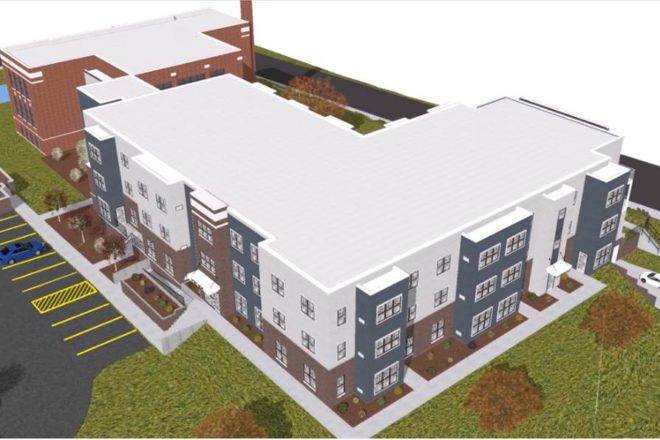 The development would include 10 units in the rehabbed west side school, and 30 more in a new wing connected to the original structure.

The developer behind a proposal to redevelop the old Sturgeon Bay west-side school into apartments is proposing a truly affordable housing option.

“None of the developments to this point could be considered attainable housing,” siad Jim Schuessler, the executive director of the Door County Economic Development Corporation who has made affordable housing his top priority.

“We are passionate about saving historic buildings and are excited that this building has the opportunity to live with a new purpose,” Dumke said. “If all goes as planned, west school’s 100th birthday will be celebrated with its rebirth as a place offering quality housing.”

The WHEDA tax credits require that a minimum of eight of the 40 units proposed for the development be guaranteed for veterans.

The city has long hoped to see the old school developed in hopes of further revitalizing the west side, but the plan has detractors as well. To make the project viable, Dumke said he needs to purchase and add the old west-side ball field next to the school to make the development large enough to pay off.

Schuessler said other developers he has approached told him a smaller development wouldn’t be viable without tearing down the school to build larger.

“In my opinion, this is our only shot of saving this historical building,” Schuessler said.

Some city residents have strong ties to the little-used field, however. The field and its rare bowl-seating structure overlook the school and offer views of the city and slivers of the canal.

Ken Mac Donald owns Cedar Creek Carpet, located across the street from the ball field and Sturgeon Bay Skatepark. A fan of the ball field, Mac Donald said he would not have a problem if it had to go, but for the right kind of development.

“There’s no sense in taking the most historic ball field in the state of Wisconsin, on that location, for low-income housing,” he said.

Mac Donald recognized that low-income housing is one of the city’s greatest needs, but he said it should be located on less valuable property.

“That field is the single most developable property in Sturgeon Bay,” he said. “With that location and those views, if they’re going to use it, use it for better purposes than for housing that can go anywhere.”

Schuessler cringed at the idea that attainable housing shouldn’t go in a great location.

“We need urban affordable housing that is walkable,” he said. “These are entry-level teachers, nurses, waiters and waitresses that qualify for this housing.”

He suggested remaking the ball field into a soccer field or a winter ice rink, or saving it for another type of development.

Mayor David Ward said the development fills a lot of high-priority city needs, and the field does not get the use it once did. The field is used for softball games one night a week during the summer.

“I understand the concern,” said Mayor David Ward. “I played competitive softball. It simply is not used anywhere near the extent it used to be. It’s used maybe 20 days out of the year, so you come to a judgment of, do you save it for 20 days of use a year, or do you house 100 people who use it every day of the year?”

Ward said that if the development moves ahead, the city may seek to make enhancements to the PBI softball field, which isn’t up to regulation standards now. The west-side ball field does not meet regulations either.