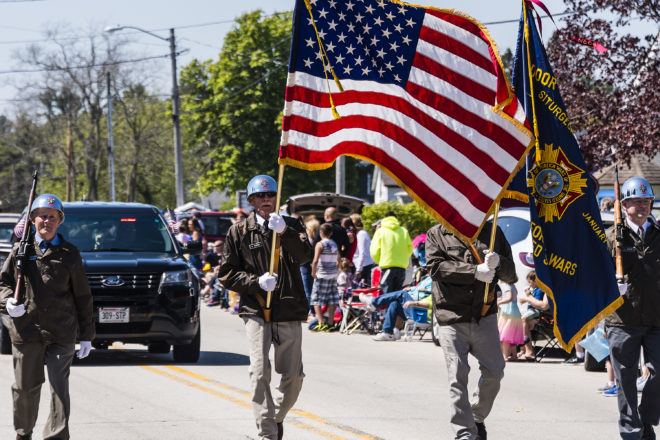 Many events, like Jacksonport’s Maifest, have already been canceled. Photo by Len Villano.

When Gov. Tony Evers announced that he was extending Wisconsin’s Safer at Home order to May 26, it shocked a lot of people, including restaurateurs who were holding out hope they could soon begin recouping losses.

The Tavern League quickly responded to Evers’ extension with a call to reopen bars and restaurants May 1 with limited capacity, masks and gloves for servers, and social-distancing stipulations. But in conversations with nearly two dozen business owners, emergency officials and local representatives this week, few were chomping at the bit to open the doors, and only one was prepared to open immediately.

“If we stay the course, hopefully it ends here faster than in some of the other states,” said Bob Geitner, who owns Mr. G’s Logan Creek Grille in the Town of Sevastopol and has already canceled several large events. “Sure, I’d love to be open, but it’s probably best to go till mid-May or end of May. It’s a tough call.”

On April 20, Evers announced the Badger Bounce Back plan: a set of guidelines for businesses to slowly reopen that’s based largely on the guidelines released by the White House on April 17.

Chief among the guidelines is a 14-day downward trajectory of COVID-19-like cases and positive tests as a percentage of total tests performed. That percentage has hovered between 8.5 and 11.9 percent since April 9. The Wisconsin Department of Health Services tracks that data here>>

To restart business activity, the plan calls for increased lab capacity and testing; increased contact tracing, support for isolation and quarantine, and tracking of the spread of COVID-19; increased health-care capacity; and more personal protective equipment for health-care workers.

“These metrics will be applied on a statewide basis [because] this highly infectious virus knows no county boundaries and can easily spread from regions with high prevalence to regions with low prevalence,” according to the plan.

Bob MacDonald of the Bayside Tavern in Fish Creek said he’s in no rush either.

“I’m of the thought that we need to be cautious,” MacDonald said. “As soon as the weather turns nice, we’re going to get people from every corner of the country. I’d rather wait longer than open up now, and watch the cases ebb and flow.”

Losing Memorial Day Weekend is a tough pill to swallow, but JR Schoenfeld, who owns Chives in Baileys Harbor and Barringer’s in Fish Creek, said it’s a tradeoff.

“I’d rather lose Memorial Day and have July and August,” he said, “than jump the gun and open too soon and end up losing the whole season.”

Rob Esposito operates Jimmy John’s in Sturgeon Bay and several vacation rental properties. He said he hunkered down early in the crisis but now is concerned that the state is so focused on COVID-19 cases and deaths that other health and economic impacts are being overlooked.

“If we don’t get something going here, the real health impacts of everything else happening might be worse very quickly,” he said. “Real health costs. Undiagnosed cancers. Domestic abuse scares the crap out of me: Women in terrible situations that might not be making the phone call when they’re locked in with someone abusive. Suicide. What’s the cost of that if we’re laser-focused on COVID? I think we need to open up in a very responsible way. Reduced capacity of businesses, a phased opening. I personally feel confident we could do that today.”

“I hope we get to a point in mid-May where we’ve seen that downward trend and the governor is willing to rethink things,” Crook said.

In Sister Bay, Fire Chief Chris Hecht got ahead of the crisis before most municipalities, beginning work on a volunteer network that has become the Door County Emergency Support Coalition. That network has grown to more than 500 volunteers who helped with the April 7 election, deliver food to people sheltering at home or in quarantine, and answer questions from residents seeking resources of all kinds. He said the coalition’s operation can’t go on indefinitely, but he’s in no rush to see the county open its doors.

“I don’t know that we want to be the beta test,” he said. “If we open, by the time we get geared up and going, then if there is a problem and we have to shut it back down, we’re into June. And now we’re losing valuable time.”

The spike in cases tied to meat-packing plants in Brown County raised new concerns for Hecht, but he is encouraged by signs that COVID-19 hospitalizations in most of Wisconsin seem to have plateaued. But on April 22, the state reported 225 new cases – the biggest one-day jump so far – though that was due to an increase in testing. Through April 22, the state had reported 4,845 cases and 246 deaths. Door County has reported nine cases, one death and six recovered cases. Kewaunee has reported eight cases and one death.

Hecht suggested the state and county could find a middle ground on some restrictions, such as opening up seasonal campground sites that cater to people who stay for eight weeks or more or that are used by local residents.

Hotels are deemed an essential business, but many have closed anyway, and other seasonal establishments are waiting to reopen.

“Whenever that date comes, it would be very beneficial to me to know what the rules are going to be,” said Fred Anderson of the Ashbrook Suites in Egg Harbor. “What will happen with swimming pools, continental breakfast and serving coffee? My staff is ready, willing and able to come to work, but I don’t know what that means. There are lots of questions.”

Brit Unkefer owns Wild Restaurant Concepts, which operates five restaurants in Sister Bay, Baileys Harbor, Fish Creek and Egg Harbor. As eager as he is to get back to serving more customers, he said he’s been frustrated by the lack of clarity and detail that has come with Evers’ announcements.

When Evers first announced the closure of nonessential businesses, he didn’t provide a list of which businesses would be considered essential, leaving restaurant owners wondering whether they should plan on opening the following day. When Evers extended the order last week, he waited three days before announcing the criteria he would use to consider allowing businesses to reopen in his Badger Bounce Back plan.

“Why didn’t he have the Badger Bounce Back plan ready when he extended the order?” Unkefer asked.

Unkefer said he would be prepared to open May 1, but he didn’t think that was smart for the state yet. Like many restaurant owners, he feels there’s a disconnect between the risk politicians see in small businesses and the operational reality. Thousands of small, independent restaurants and shops are closed statewide, but large chains such as Target, Walmart and CVS remain open for hundreds of customers to buy a wide variety of products.

“I think all of us as small-business owners are going to do a better job of keeping our employees safe and customers safe than a lot of other places,” Unkefer said. “We have so much to lose if we don’t.”

The lack of direction from state and local officials spurred Paul Salm, owner of Cornerstone Pub in Baileys Harbor, to start a discussion with other restaurant owners to find solutions of their own and potentially build a unified voice for the industry.

“The consensus in our group is, let’s not lose July and August. It’s best to wait to open,” Salm said, “until we know it’s a safe environment for our employees and for us to make some money. And when and if we do open Door County, we want to be able to say, ‘These are the rules, and this is how we’re getting that message out.’”

Salm said the group started small this week and will slowly expand.

“It’s become clear that we need to be the leaders – we’re going to have to figure this out,” he said. “And we will.”

Unkefer described his workplace as a bubble to mitigate the spread of COVID-19, and emphasizes daily to his staff members that they must keep their own personal bubble clean.

“You need to keep your personal bubble so tight that you do not infect the big bubble here at work, because if you do, we’re all done,” he said.

All of the business owners contacted by the Pulse said they expect to face heavy scrutiny whenever their doors open again.

“We’re all going to be under the microscope,” MacDonald said. “It’s going to be really, really strange once people start filling bars and restaurants. One of my biggest concerns is being that first place where one of your employees gets sick. Then you are closed for the whole summer. It wouldn’t be bad for that one business – it would be bad for the entire community that business is in.”