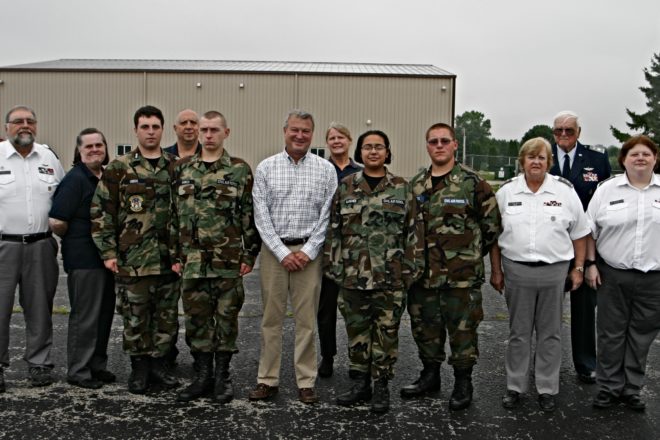 On the morning of July 21 Kitchens was at Cherryland Airport for a ceremony performed by members of the Door County Composite Squadron of the Civil Airport, inducting Kitchens as a major in the Wisconsin Wing Legislative Squadron of the Civil Air Patrol (CAP). He joins 19 state senators and 35 Assembly members who have joined CAP, which is the United States Air Force Auxiliary.

Kitchens then held an informal Q&A session with the five cadets who attended the regular meeting of the organization. The CAP is open to youths from 12 to 21 years old (at age 18, a member can decide to continue as a cadet or join senior leadership). He asked the cadets what attracted them to the organization, and the answers ranged from wanting to get a low-cost pilot’s license to wanting to learn from the leadership skills practiced.

The senior leaders – who volunteer their services to the organization – outnumbered the cadets on this Saturday. One of them, Capt. Maryellen Merck, described the organization as a cross between Boy Scouts and ROTC. Her husband, 1st Lr. Louis Merck, works closely with the cadets, and their son Aidan Merck, serves as a cadet officer and leader of the cadets.

Squadron Commander Fish and Lt. Co. Ronald Marto, the squadron safety officer, explained that in addition to aerospace education, the cadets learn about and take part in search and rescue missions, including local shore patrol along the peninsula.

Marto is the only original member from the CAP group formed in Door County in 2001. The Door County Composite Squadron is proud that it has been awarded the Aerospace Education Excellence Award for providing education to cadets beyond the basic level every year since 2004.