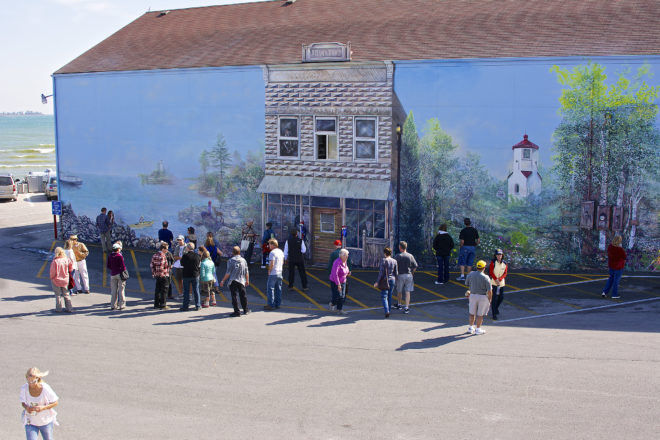 When news spread that Nelson’s Shopping Center in Baileys Harbor would close its doors at the end of 2016, one question stood out among the many:  what would become of the two-story mural adorning the building’s north side?

The mural, dreamed up by local poet Nancy Rafal and created by muralist Ram Rojas in 2013, features historically and locally significant focal points and figures, including The Ridges Sanctuary’s lower range light, environmentalist Emma Toft, and the Brann Bros. Store, which originally stood on the site of Nelson’s Shopping Center. Inscribed on the 96’ x 22’ mural are verses from the late poet Lorine Niedecker’s “Wintergreen Ridge,” inspired by her visit to The Ridges Sanctuary in the 1960s.

The artwork was not painted directly onto the building. Instead, the north wall was covered with aluminum-sheathed panels that Rojas painted on. To fund the $25,000 project, The Ridges Sanctuary agreed to help with grant applications while the Baileys Harbor Historical Society stepped in as the nonprofit organization to receive contributions for the project.

To kick-start the project in 2012, an anonymous lender provided an interest-free loan. Donations and grants have covered a majority of that loan, but a portion remains.

Before Rafal can create a plan for removing and relocating the mural, her priority is repaying the loan that jumpstarted the project.

“We still have about $8,000 to pay back our anonymous lender,” Rafal said.

Once the loan is paid off, Rafal will begin researching costs on renting a scissors lift and potential new locations for the mural, which was designed to be modified over time to reflect the town’s growth and history.