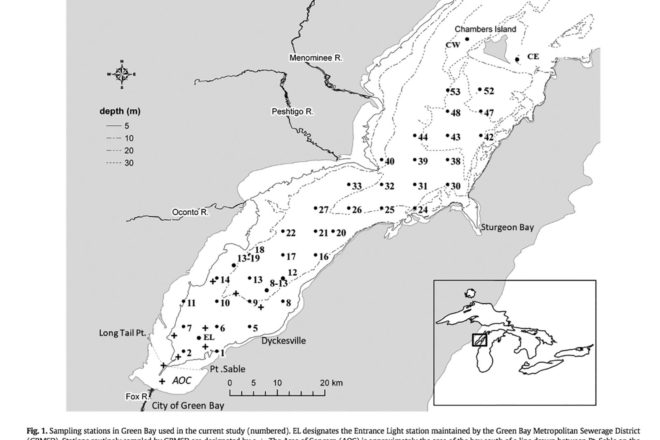 The numbered areas are sampling stations in Green Bay that were used in the current study. Stations routinely sampled by the Green Bay Metropolitan Sewerage District are designated with a plus sign. The Area of Concern (AOC) is approximately the area of the bay south of a line drawn between Point Sable on the east and Long Tail Point on the west.

A new research report on Green Bay’s dead zone opens with a startling statistic:  “Worldwide, the number of marine hypoxic zones [dead zones] has approximately doubled each decade since the 1960s, fueled largely by cultural eutrophication [human activity], and numbering over 400 today.”

Remember the summer of 2014 when Green Bay’s dead zone was making national headlines? Well, it’s still here, and the new report by the University of Milwaukee’s School of Freshwater Sciences published in the latest issue of the Journal of Great Lakes Research finds that the “footprint” of the zone centers on the bottom of the southeastern portion of the bay but it can “oscillate and shift both westward and northward” and that its extent varies widely from year to year.

The report points out that hypoxia – or oxygen depletion – is a broad-scale indicator of ecosystem health. Observations dating back to 1939 have noted oxygen depletion at the southern end of the bay (referred to as the area of concern, or AOC).

“The major culprit at that time was assumed to be industrial waste water discharge loadings, primarily as waste sulphite liquor from paper mills in the Fox River, which resulted in river water that was often devoid of oxygen and which propagated in the river plume outward into the bay,” the report states.

The report frequently points out the historical lack of research, such as this line, “Although infrequently examined, late summer conditions in the bottom waters of the bay at large were historically observed to exhibit highly depleted dissolved oxygen concentrations.”

The worst example of oxygen depletion in the bay came on Aug. 5, 2005, when persistent winds forced hypoxic bottom water into Green Bay’s eastern shore “reportedly triggering the beaching and massive fish kill of tens of thousands of round gobies” that swam ahead of the front until it reached the shoreline.

The researchers determined that “the bay functions as a very efficient nutrient and particle trap, sequestering 70-90 percent of the total phosphorus inputs within the bay in rapidly accumulating, organic rich sediments…”

The report states there are two indicators that “sustained, permanent restoration has occurred”:

The report concludes that an expanded system is needed to monitor the annual extent and duration of summertime hypoxia, with the goal of providing regular dead zone updates.