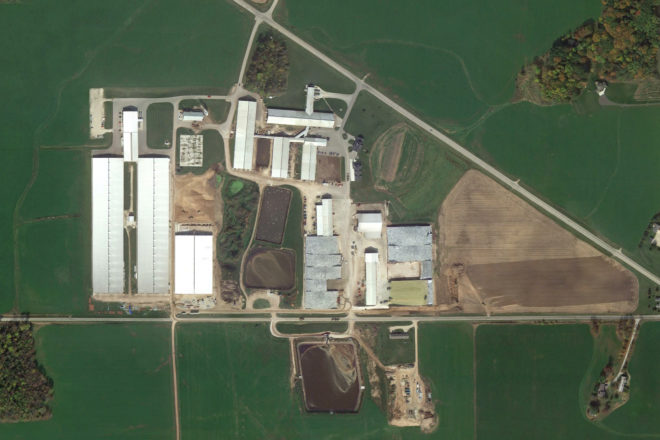 A view of Pagel’s Ponderosa Dairy in Kewaunee County. The manure storage pits are visible in the center and bottom of the photo. Google Earth.

Scientists are one step closer to understanding how dangerous contaminants from fecal matter are entering private wells in Kewaunee County, where cattle outnumber people nearly five to one. New research by U.S. Department of Agriculture microbiologist Mark Borchardt shows nitrate and coliform in the water comes mostly from agriculture, not human waste.

“Where we see the strong relationships, the strong linkages, those are with agricultural factors. So that would suggest that agriculture is primarily responsible for those two contaminants,” he said in an interview.

Borchardt presented his updated findings on the risk factors associated with contamination in wells at the Midwest Manure Summit in Green Bay on Feb. 27. In 2017, his research found more than 60 percent of wells sampled in Kewaunee County were contaminated with fecal microbes, which can come from septic systems or animal waste.

The new study aims to understand the precise sources of contamination and how certain factors can reduce or increase the risk of tainted drinking water. Borchardt used models to predict how those factors – such as the distance of a well from a manure lagoon or agricultural field, weather, and the quality of well construction – can impact contamination levels.

Borchardt’s study found that the No. 1 risk factor for contamination was the proximity of a well to a manure storage pit. Borchardt said the closest well in the study was 150 feet from a manure pit, but even wells three miles away still have some risk of being contaminated with coliform: what Borchardt called an “indicator bacteria” for the presence of other bacteria and pathogens.

According to state regulations, manure lagoons are allowed to leak 500 gallons per acre, per day. Borchardt said contamination of nearby wells may be due to leakage from the lagoon as well as the tendency of farmers to spread liquid manure close to the location of their pits. According to a spreadsheet of permitted manure storage pits in Kewaunee County from 2017, some of the largest pits for which dimensions were listed span more than four acres. Borchardt said there are around 270 manure pits in the county.

“[The findings give] policy makers and other stakeholders interested in working on solutions the information they need to think about solutions, instead of just saying, ‘Hey, your wells are contaminated,’” Borchardt said.

The contaminants investigated were nitrate, coliform bacteria, human fecal microbes, bovine fecal microbes and other fecal microbes regardless of the source. The models accounted for the effects of multiple risk factors at the same time.

Don Niles, a Kewaunee County dairy farmer and president of the nonprofit Peninsula Pride Farms, said the findings “…tell me that we need to come up with better management practices, working together as farmers to find out how we can reduce nitrates in areas where they tend to be concentrated.”

Niles’ group advocates practices such as applying manure to fields twice a year rather than once in order to minimize nitrate density, and planting cover crops to absorb more manure.

He said for farmers, solving the problem may not be straightforward.

“In some cases, [we’re] changing farming practices that are over 100 years old, and we want to make sure we’re going in the right direction and not the wrong direction,” Niles said.

The contamination of drinking water by manure has become a key political issue in Wisconsin, with Gov. Tony Evers declaring 2019 the Year of Clean Drinking Water. In recent years, the struggling dairy industry has consolidated and increased production, with smaller farms closing and concentrated animal feeding operations (CAFOs) expanding to house thousands of cows.

The average dairy cow has gotten larger, eats more and produces more manure. As cows are concentrated in certain areas, their manure is, too. And that is causing major problems.

This manure and its components, including bacteria, nitrate and harmful, illness-causing pathogens, create a public health hazard for more than 100,000 families, the Wisconsin Center for Investigative Journalism found. Nitrate is a serious health hazard to babies and pregnant women, and people who consume water high in nitrate face increased risk of colon, kidney and stomach cancers.

Nancy Utesch, a Kewaunee County beef farmer and a member of the advocacy group Kewaunee Cares, says the results of the new study show the existing manure rules and enforcement are not strong enough.

“A lot of this pollution is from intentional, deliberate actions that are not best-management practices that do a lot of harm,” Utesch said. “Like spreading close to waterways, spreading when you know rain is going to happen … and overapplication [of manure]. And I think we really need to stop digging manure pits. This is from the Dark Ages. Stop permitting them. All manure pits leak – it’s just a matter of when.”

Shelly Mayer, executive director of Professional Dairy Producers of Wisconsin, said assigning blame will not solve the problem. She wants stakeholders to come up with ways to produce food with less water pollution and called for a “holistic approach.”

“We have to focus on solutions, and be realistic that the minute we’re born, we all have an impact on our environment,” she said. “We all want to source our food locally … where we know the farmer and have oversight over that food.”