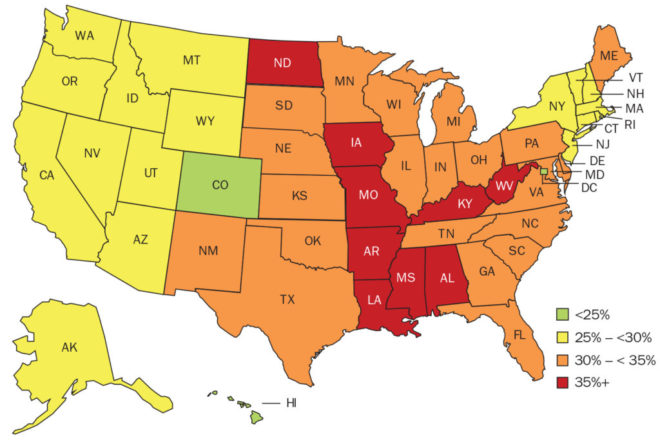 President Trump was not alone when his annual checkup found that he is obese.

A new report by the Trust for America’s Health (TFAH) – a Washington, D.C.-based health-policy organization – finds that one in three Americans of all ages is in the obese range. That’s more than 100 million people, which makes it worthy of epidemic status.

“It certainly is disturbing because there has been a good deal of attention to this health issue, and yet we’re still moving in the wrong direction,” said John Auerbach, president and CEO of TFAH, in an interview with the Peninsula Pulse.

Wisconsin clocked in at a 32 percent obesity rate for state residents, just a tick above the national average of 31 percent.

But consider this: Wisconsin’s obesity rate was 19.4 percent in 2000 and 11.8 percent in 1990. That, too, is close to the national average. Last year alone, obesity rates went up in 33 states. Nine states registered obesity rates of 35 percent: Alabama, Arkansas, Iowa, Kentucky, Louisiana, Mississippi, Missouri, North Dakota and West Virginia.

Health and nutrition experts have described the situation as a “severe public health crisis” if the obesity rate – and associated health issues – continue to climb. The report states that a 2016 study found that obesity increased annual medical expenses in the U.S. by $149 billion.

Auerbach said part of the problem is understanding the complexity of obesity. Although it’s a greater problem among low-income people because it’s harder for them to find and afford healthful foods, obesity knows no economic or cultural boundaries.

“We believe we need to have a comprehensive approach to addressing obesity,” he said. “The tendency until now has been to look at promising or even evidence-based separate programs and hope that they are effective in terms of combating the trend. What we found is it’s just not as simple an issue as combating smoking cigarettes. For example, there are a couple of very effective interventions for smoking. If you do those, smoking rates drop very quickly. With obesity, it’s not that simple. The issues involved are significant social, environmental and economic [ones]. We have to come up with a more comprehensive and sophisticated approach.”

The report highlights 31 recommendations to turn the obesity trend around, and Auerbach pointed out three positive developments during the last year.

“The first is that the Centers for Disease Control did its own analysis of what it will take to combat the obesity epidemic,” he said. “It realized it needed to make the case that a different kind of funding is necessary for states.”

Although there has been much talk about the obesity epidemic, Auerbach said little federal money has been spent on the problem.

“The CDC – the main preventive agency in the nation – received no new money in the last 10 years to work on obesity,” he said. “Look at money for other types of health issues such as tobacco or infectious diseases. It’s in the millions.”

But things changed recently with what the CDC calls its State Physical Activity and Nutrition (SPAN) Program. In the past, it gave $100,000 grants to all 50 states to work on obesity programs, but during the last fiscal year, it decided to give 16 states $1 million each to, in the CDC’s words, “implement evidence-based strategies at state and local levels to improve nutrition and physical activity.”

“What the CDC ended up saying,” Auerbach said, is that “instead of giving a kind of worthless amount of money, let’s give a more comprehensive amount. We can’t do all 50 states, but we can demonstrate [that] with a significant amount of resources and support from us, you can begin to make a difference. One of our recommendations is, if that’s the right model, then put enough money in the budget to give to every state so the public health department will be able to mount a serious effort.”

“A study out this year confirmed that it has been effective in combating obesity among children,” he said. “That’s great to know, but the WIC program in Wisconsin enrolls only 48 percent of the eligible people. We’re asking for federal and state support for the program so it goes to 100 percent of those eligible, because we know that it works.”

The reason why it works is a simple one.

“The WIC program will pay for foods, but only nutritional and healthful foods,” Auerbach said. “In fact, in 2009 it revamped its food package. It’s from 2009 on where WIC enrollees showed signs that were very promising for combating obesity. It also offers nutritional counseling for expectant and new mothers for the first six months. They are given coupons to buy only healthful foods. Great program.”

The third light at the end of the obesity tunnel for Auerbach comes from data gathered in American cities that have imposed taxes on sugary drinks.

“The research that came out this year confirms that where those programs are in place, there’s a significant drop in purchases of soda within a one-year period, and since soda has been shown [to be] strongly correlated to obesity, that’s impressive within one year,” he said.

“These are three things that the evidence now shows do make a difference, and therefore, there’s reason for optimism in the data that have come out.”

You can read the entire 2019 State of Obesity Report and more about the issue at tfah.org.