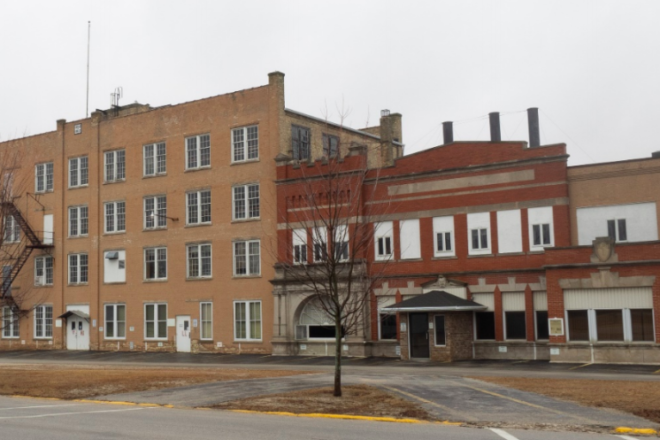 The Algoma City Council and the public heard from Gary Becker of GWB Professional Services on the possible remediation and use of the former site of Algoma Hardwoods at its Sept. 4 meeting.

The plant, which borders the Ahnapee River just a few blocks from downtown, closed in Jan. 2017, ending more than a century of being a leader in producing wood-faced and mineral-core fire doors. It eventually expanded to produce other special purpose doors.

Masonite International Corps. bought the company in 2012 and still maintains about 50 employees in Algoma, but none at the Algoma Hardwoods site.

Saddled with a deteriorating property with a history of environmental contamination, the city contracted Becker to provide a report of future options.

A community survey gathered in June showed a slight majority, 151 respondents, favoring some kind of recreational use for the site, compared to 121 calling for continued use as a manufacturing site.

The report cautiously confirms the will of survey respondents.

“There appears to be potential to establish a significant regional recreational hub that can attract visitors to Algoma,” the report said. “The site’s proximity to the downtown and harbor amenities such as fishing charters, marina and condos reinforces the potential of the site to serve a regional market.”

But it’s a bit more complicated than choosing a use and going with it.

“With almost half of the building space not suitable for modern industrial use and the site located in a floodway preventing significant new investment in the building without first filling the site and producing engineering reports demonstrating little-to-no impact on the flood flow, this site is not likely to continue in manufacturing or any other use except agriculture or recreational over the long term,” the report said.

Much of the site sits in a floodplain and Algoma Hardwoods was a nonconforming use for the last half of its life. Future uses on the property must be limited to things that don’t need a structure, such as agriculture, recreation or a parking lot.

To restrict matters further, there was a petroleum spill at the site in 2004. Environmental remediation went only so far as to ensure the site was safe for the operation of Algoma Hardwoods. A change in land use may disturb the contamination and require additional cleanup, according to the report.

The report offers a few avenues for the city to take. Because the site fits the statute definition for blight, the city can create a Tax Increment Finance District (TIF) and create infrastructure that will encourage private development of the property. Because the environmental remediation costs could be high, developers will not be as attracted to the property. The city could absorb those costs upfront and recapture them with increased property tax revenue when the site is privately developed.

The city could also create a redevelopment authority, which is a seven-person commission appointed by the mayor that has broad authority to borrow money, enter into contracts and sell property.

The report also recommends the city explore the historic significance of the structures, many of which are more than a century old.

City administrator Jeff Wiswell said the council will review the findings of the report and possibly make changes before formally accepting it in a few months. The document will then serve as a guide to future development of the site.