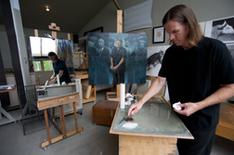 In Craig Blietz’s Sister Bay studio, the artwork on the walls consist mostly of Holstein cows, save for a few charcoal drawings of Paunch (aka Sam), Blietz’s portly 18-year-old tabby cat. There are a number of dairy farms that still exist on the peninsula, so this doesn’t seem to be a subject that would be out of context for a Door County artist, especially one whose property contains a barn studio and a farmhouse.

“How is it that Paunch gets to be up there?” I ask Blietz, motioning to the two drawings of his feline companion.

Blietz laughs. “Well, Paunch kind of reminds me of a cow. He intrigues me.”

Blietz’s intrigue with representational art – both the human figure and otherwise – began when he attended the University of Denver, obtaining a Bachelor of Science degree. He then decided to continue his art and design studies at the Harrington College of Design in Chicago. His studies at Harrington were followed by academic training at the School of Representational Art, also in the Chicago area.

Although he wouldn’t make the move to Door County until the late 1990s, Blietz had already entertained a fantasy of living in a somewhat rural area in 1985, when he had a vision of himself living in an agricultural environment, complete with a studio and living quarters in an old barn. However, the “city person” in him prohibited this idea at first. “I had this dream, but having lived in Chicago for so long, I had no idea how to facilitate this kind of move,” he says.

He came to the peninsula first in 1995, with an artist friend from Chicago who wanted to introduce him to Sister Bay artist Jim Ingwersen. “I came up in September, a month that’s a real ‘marquee moment’ for the county,” Blietz says. He met Ingwersen, saw his studio and home setup, and something clicked. “Here was this man who had this quintessential artist’s compound in exactly the kind of area I had envisioned living in all of those years ago,” Blietz says. “It all made sense.” He would return to the peninsula several times before he decided to make the move to the county permanent in 1999.

One would guess that this is where Blietz’s interest in sketching and painting cows began, but his fondness for cattle actually began while he was still in the Chicago area in the mid-1990s. “I appreciate the geometry of cows,” he says. “Their rectangular bodies, the abstract patterning, the way you can see the anatomy and structure of the animals through their short coats. I was trained as a figure painter, so it wasn’t hard to appreciate and become attracted to the form.” There was a farm in a northern Chicago suburb that still had a herd of cattle, and Blietz would spend quite a bit of time studying and sketching these animals.

Even with this interest, Blietz doesn’t consider himself an animal painter. “I kind of use the cow as a vessel for my expressive concerns,” he says. “I refer to them more for form than an actual subject.” To further this point, he explains a group of paintings he is working on for an upcoming show. The pieces are smaller square paintings, each seeming to detail a specific part of the cow, or how the cows look when they appear in a herd. “They are fabulous when they all group together,” Blietz says. “It’s like an old-fashioned kaleidoscope.”

Depending on what stage he’s in as far as the creation process, Blietz uses a variety of mediums. He paints mainly in oils but uses anything from acrylics, ink, charcoal, and pencil if he’s in the working stages of a piece. He also prefers to work in a limited palette of colors in the working stage. “Color isn’t as important to me in the beginning,” he says. “Edward Degas once said something to the affect of, ‘If I could work in only black and white, that would have been my choice.’ I would say I have to agree with him. And I feel the same way about the type of medium I use. I don’t think the medium I use is as important as the vision I have with a piece.”

Blietz’s studio is, as you would guess from his fantasy, a barn – complete with two long walls running parallel to one another, and within this studio he has created a “sketch wall” and a “working wall.”

“I take a lot of steps to get to a finished product,” he says, “and in taking all of these steps, it’s a validation process of sorts. I’m not the kind of artist that can just go into it, not knowing where it will end up. If I go through this many steps to create this piece, I know that it’s interesting to me.”

Having been trained as a figure painter, Blietz does say that form is a huge part of his work – but also recognized the need early on in his career to break out of that intense concentration on form and find his own artistic concerns. “I realize that it’s a little strange for me to be admitting that, seeing that I’m the Artistic Director and a faculty member of [the Kewaunee Academy of Fine Art] that drills into students the concept of form and representation.” This prestigious art program trains and prepares students for careers in contemporary representational painting.

“Figure painting is a training ground of sorts,” says Blietz. “Once you learn how to paint that way, you can realistically paint anything. But once you’re done with that kind of schooling, you need to go out and find your own expressive concerns with the artwork.”