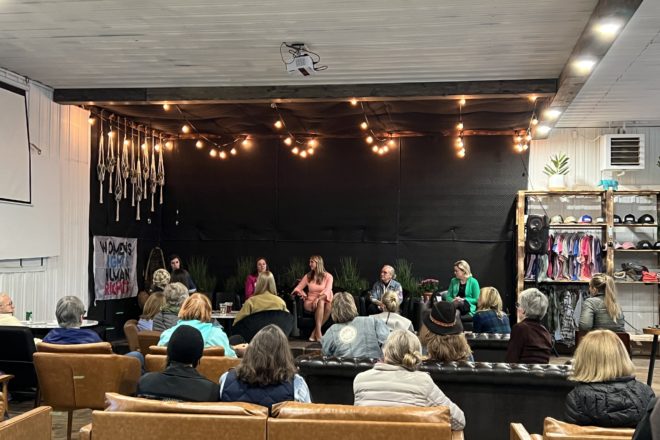 The four panelists discussed the recent overturn of Roe v. Wade, how it affects Wisconsin women and how upcoming elections can affect abortion access.

Northern Door Activism (NDA) organized the panel, with co-founder Aleah Kidd spending around an hour asking the panelists about their stances on abortion and how community members can fight for reproductive rights.

When organizing the panel, co-founder Emma Cox said NDA had three goals: to raise support and funds for the three candidates, to give the candidates an opportunity to meet a community they don’t often visit, and to build on the momentum that began during July’s Walk for Women, a pro-choice march that NDA organized in Sister Bay.

The panel was also a way to frame a potentially intimidating topic in a laid-back setting, Cox said. That’s why the group chose Peach Barn as its venue: so attendees could have a drink and socialize with their community, she said, while also discussing pressing social issues.

Because the Roe v. Wade decision inspired the group to come together, most of the events that NDA has organized so far have focused on women’s rights. But in the future, the group hopes to organize programs about racial justice and climate change.

“Even though sometimes it can be scary to use your voice, to put on an event like this, to organize like this, especially in a small community, you’ll find that there is space for that,” Cox said. “There are people who want that, who are looking for a place to express the importance of some of these issues.”