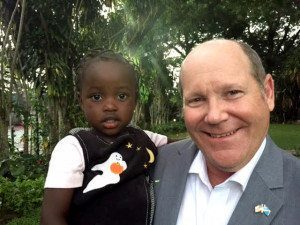 Congressman Ribble meets Grace, a Congolese 3-year-old who was legally adopted by a Green Bay family two years ago and is still living in an orphanage waiting to be allowed by the Congolese government to leave the Democratic Republic of the Congo. Submitted photo.

Ribble released the following statement after a meeting with government leaders in Kinshasa, Democratic Republic of the Congo (DRC), regarding the children who have been legally adopted by American families but detained in the DRC, some for as long as two years: “Adoption is a beautiful thing. Unfortunately, messy internal politics have prevented Congolese children like 3-year-old Grace from coming home to her legal adoptive family in Green Bay, and to hundreds of other adoptive families around the U.S. As part of my ongoing push to bring Grace and all legally adopted kids home, I met with Congolese Prime Minister Augustin Ponyo, cabinet members, and leaders in parliament in Kinshasa, Democratic Republic of the Congo. I encouraged them in the strongest terms possible to put politics aside and work in the best interests of these children. Through my position on the House Foreign Affairs Committee, I will not let up until every legally adopted child is able to come home to the family that has waited years to welcome him or her.” A Green Bay family legally adopted Grace from the DRC in early 2013 when she was just 10 months old. Unfortunately, the Congolese government suspended exit visas for her and all other adopted children in December of 2013.

Baldwin, a member of the Senate Health, Education, Labor and Pensions (HELP) Committee, pressed for action from President Obama to help bring down the soaring cost of prescription drugs. In a letter, Baldwin and a group of lawmakers called for more support in the President’s 2017 budget proposal to help address prescription drug prices and cut health care costs. The lawmakers urged the President to do several things to address this growing problem – allow the government to negotiate prices with drug manufacturers, promote competition in the generic drug market, prevent price gouging, and outlaw “pay for delay,” which is a practice where brand name drug companies pay generic drug companies to stay out of the market.

Johnson called on the federal government to protect Wisconsin farmers, sportsmen and loggers, introducing an amendment that would allow state wildlife authorities to manage gray wolves. Johnson’s amendment to the upcoming Energy Policy Modernization Act instructs the Department of the Interior to reissue final rules related to the listing of the gray wolf in Wisconsin, Michigan, Minnesota and Wyoming under the Endangered Species Act of 1973. Johnson also introduced an amendment that would prohibit the director of the United States Fish and Wildlife Service from listing the Northern Long-Eared Bat as an endangered species.

Obama will propose a $10-per-barrel charge on oil to fund clean transportation projects as part of his final budget request. The proposal – which follows the passage of a bipartisan transportation bill last year – would have difficulty clearing the Republican-controlled Congress. In a statement, Rep. Steve Scalise of Louisiana, House majority whip, said the House would quash the “absurd” plan. Oil companies would pay the fee, which would be gradually introduced over five years. The government would use the revenue to help fund high-speed railways, autonomous cars and other travel systems, aiming to reduce emissions from the nation’s transportation system.