Kitchens voted for a package of bills that will help people suffering from opioid addiction, and provide more tools to fight Wisconsin’s opioid and heroin epidemic. The Wisconsin State Assembly passed four bills that will build on the HOPE Agenda (Heroin, Opiate Prevention and Education) and continue legislative efforts to combat addictions through prevention and treatment efforts. From now on, Wisconsin licensed physicians are required to review the Prescription Drug Monitoring Program (PDMP) when prescribing a monitored controlled substance, and pharmacies will report any prescription painkillers filled within 24 hours. Statistics show that 90 percent of overdose cases are caused by re-prescribed opiates. “These changes will help us address the root of opioid abuse in our state,” said Kitchens. “Stopping opioid abuse and addiction before they begin will help put Wisconsin back on track and allow us to treat this epidemic.”

The Governor released the following statement regarding President Obama’s planned executive action related to gun control: “President Obama is again disregarding the Constitutional principles of separation of powers and exceeding his authority as Chief Executive. The Obama Administration issued guidance creating uncertainty and fear of prosecution for law-abiding citizens who wish to exercise their right to sell firearms lawfully. Forthcoming federal rules could also deprive millions of Americans of their Second Amendment rights without any indication of imminent danger. I have asked the Attorney General to review this proposed rule language as soon as it is made available and, if issued as reported, to take any and all legal measures available to challenge this illegal act.” 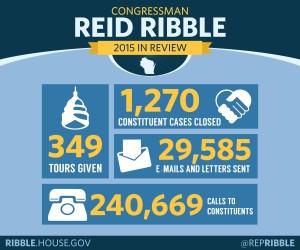 Ribble sent his own year in review with the following statistics for 2015:

Baldwin has submitted testimony for a hearing of the International Trade Commission (ITC) on behalf of the Wisconsin paper industry and its 52,000 employees in the state. Domtar Corporation and United Steelworkers (USW) allege that China, Brazil, Australia, Indonesia, and Portugal have dumped paper into the U.S. market. In addition, China and Indonesia were found to be providing illegal state subsidies to their paper companies. The ITC hearing will determine if the dumping is materially injuring U.S. paper producers. “In Wisconsin, we have one of the largest manufacturing sectors in the nation, supporting a large share of our workforce and exporting goods all over America and the world. Many of the goods that the manufacturing sector produces are trade-sensitive, meaning that similar products are available to be imported from abroad. The rules governing these trades are understood by all of our trading partners, but the high stakes of international competition can tempt our competitors to tip the scales in their favor,” Baldwin said in her submitted testimony. United States manufacturing has suffered financial losses and lost thousands of jobs as a result of persistent patterns of unfair trade across all segments of the sector.

Johnson issued the following statement after President Obama vetoed legislation repealing the Patient Protection and Affordable Care Act: “The president made clear that he is unwilling to accept or even acknowledge the very real harm caused by Obamacare and the negative impact the law has had on families in Wisconsin and across the country. Ultimately, Obamacare represents more than just higher costs, reduced access and fewer choices that are squeezing hard-working Americans – it represents the broken promises made by the president to the American people to lower premiums and let people keep their plans and doctors. With a new president in 2017, a Republican Congress will again pass legislation to repeal this disastrous law and replace it with reforms that give freedom and choice to doctors and patients necessary to actually deliver affordable and accessible care.”

The President delivered his eighth and final State of the Union address on Jan. 12. Read the entire speech here: whitehouse.gov/the-press-office/2016/01/13/remarks-president-state-union-address.