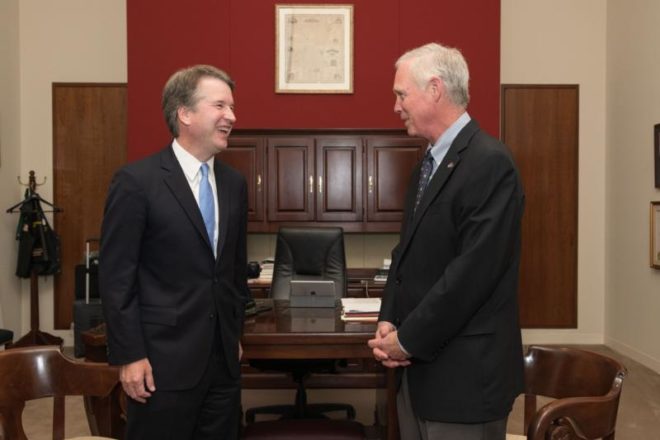 A conservative advocacy group funded by the billionaire Koch brothers is launching a $1.8 million ad buy for Gov. Walker. Americans for Prosperity-Wisconsin announced the TV, cable and digital ad buy on Tuesday. It’s the latest in a series of seven-figure ad buys in the race that pits Walker against the state schools chief, Democrat Tony Evers. The AFP ad quotes positive comments from Evers for Walker’s most recent education budget, including calling it “pro-kid.” Evers has said that he praised the additional spending for public schools because Walker was proposing much of what Evers put forward as state superintendent. Walker has cast himself as an “education governor,” while Evers has said Walker is trying to hide his record cutting spending and attacking collective bargaining.

Last week, the New York Times reported that: “The Trump administration is planning to suspend routine examinations of lenders for violations of the Military Lending Act, which was devised to protect military service members and their families from financial fraud, predatory loans and credit card gouging, according to internal agency documents. Mick Mulvaney, the interim director of the Consumer Financial Protection Bureau, intends to scrap the use of so-called supervisory examinations of lenders, arguing that such proactive oversight is not explicitly laid out in the legislation, the main consumer measure protecting active-duty service members, according to a two-page draft of the change.”

Recognizing that U.S. troops face unique financial challenges and that the financial readiness of our servicemembers is directly tied to military readiness, the Senators called on Mulvaney not to halt military lending checks or undertake measures that would potentially harm U.S. troops and their families. The letter was signed by all 49 Senate Democrats, who noted that the U.S. Department of Defense has attested that the MLA helps save U.S. taxpayer funds and that needlessly stopping proactive MLA examinations would be both inefficient and irresponsible.

Sen. Johnson met with Judge Brett Kavanaugh, President Trump’s nominee to join the Supreme Court, last week to discuss his nomination and judicial philosophy. “Judge Kavanaugh’s impressive legal background combined with his compelling personal history makes his nomination an easy one to support. Most importantly, as I have reviewed his judicial record I am confident of his intent to apply the law as a judge, not alter it as a super-legislator. I look forward to voting to confirm his nomination to the Supreme Court once the Senate has thoroughly but expeditiously completed the confirmation process.”

Coal is a dirty fuel. Not only does it contain far more carbon than other energy sources, it also contains other kinds of pollutants. The non-carbon pollution effects are a crucial cause of coal’s decline. It’s why Chinese cities, so choked with pollution that you can barely breath outside, are phasing out coal. The Obama administration helped drive coal plants out of business by regulating those pollution sources more strictly.

Trump’s energy plan, unveiled Aug. 20, is to deregulate coal in hopes of staving off its demise. Trump justifies the policy on the grounds that coal miners are wonderful people and climate science is a hoax. But there’s an important side effect to his pro-coal policy: keeping more coal-fired plants around means keeping more of the other kinds of pollution around in addition to carbon dioxide. The New York Times peered into the internal documents written by Trump’s own Environmental Protection Agency, and it finds the additional pollution will kill a projected 1,400 Americans a year.

As the EPA delicately puts it, “Implementing the proposed rule is expected to increase emissions of carbon dioxide and the level of emissions of certain pollutants in the atmosphere that adversely affect human health.”