Gov. Walker is walking back plans he previously submitted to designate a National Marine Sanctuary in Lake Michigan, saying it would create unnecessary “red tape.” In a letter he sent to the National Oceanic and Atmospheric Administration (NOAA) last week, Walker said he’s pulling his 2014 nomination for the monument because of “concerns” from citizens.

“One of the hallmarks of my administration has been to reduce the regulatory burden on the citizens of the State of Wisconsin,” Walker said in the letter. “We believe this designation would create further unnecessary bureaucratic red tape. The addition of another level of federal bureaucracy will not materially advance our shared commitment to protecting shipwrecks.”

The plan would have protected dozens of offshore shipwreck sites, which are popular locations for divers and researchers due to their attraction for fish. Last April, President Trump signed an executive order reviewing all national marine sanctuary creations and expansions, effectively putting a hold on new designations.

Rep. Gallagher and a group of his colleagues are requesting that legislation be brought to the floor that will reauthorize the Land and Water Conservation Fund (LWCF) before it expires on Sept. 30, 2018. The LWCF is a 1964 law designed to assure Americans that outdoor recreation lands and recreation sites would be secured, on a pay-as-you-go basis, for future generations. Rep. Gallagher said:  “For more than 50 years the LWCF has been successful at bringing federal, state and local governments together to safeguard our natural areas, water resources and cultural heritage – all without using taxpayer money. Legislation must be brought to the floor as soon as possible because renewing the LWCF is not just vital to our economy, but also to our way of life in Northeast Wisconsin.” 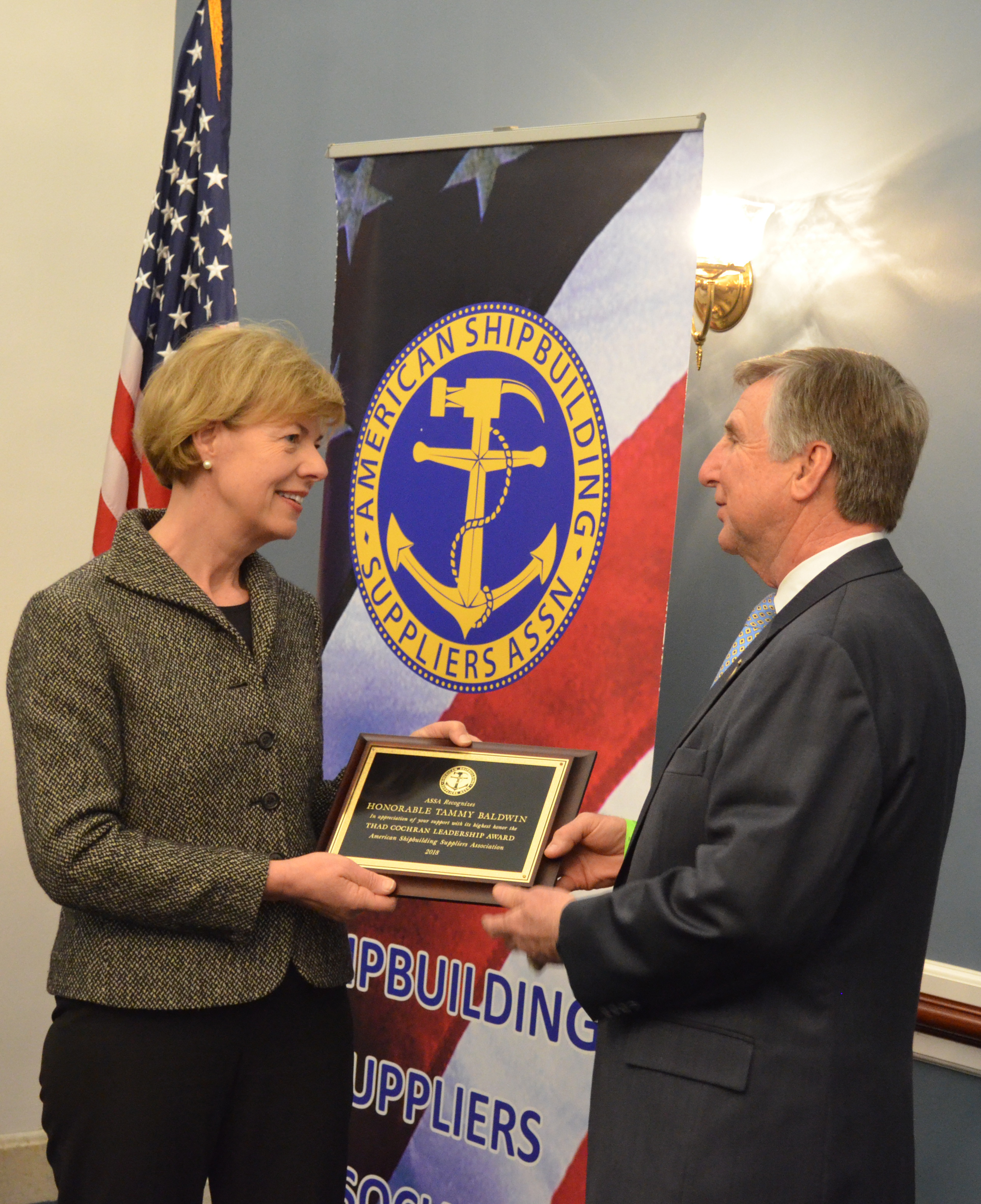 For her efforts to support and maintain a robust shipbuilding supplier industrial base, Sen. Baldwin was recognized by the American Shipbuilding Suppliers Association (ASSA) as the 2018 recipient of the Honorable Thad Cochran Leadership Award.

“I value my partnership with the American Shipbuilding Suppliers Association in supporting our shipbuilding and manufacturing industries that strengthen the economic security of the middle class. Thank you for this honor and I look forward to many more years of working with the ASSA and supporting Made in Wisconsin shipbuilding,” Baldwin said.

Baldwin was selected to receive this award for her strong commitment to investing in science, research and technology to strengthen advanced manufacturing, small business start-ups and an innovative economy that is built to last and ready to compete with the rest of the world. In addition, the award recognizes Baldwin’s successful inclusion of Buy American provisions in recent defense authorization and appropriations bills. The ASSA established this annual award as a way to honor the leadership of Senator Thad Cochran (R-Miss.) for his continued and unwavering support to those large and small businesses that provide the critical technologies and components necessary to build Navy and Coast Guard ships.

Sen. Johnson said he supports lowering the drinking age to 18 years old in the United States, after admitting he didn’t know the current legal drinking age.

Johnson discussed the topic during an appearance on “The Devil’s Advocates” radio show in Milwaukee. When asked about raising the minimum age for gun buying to 21 years old, Johnson said people old enough to join the military should have a number of other rights.

Wisconsin’s drinking age has been 21 years old since 1986. Then Gov. Tony Earl and state lawmakers raised it to prevent a major cut to federal highway funding.

President Trump’s longtime personal aide John McEntee was fired because he is currently under investigation by the Department of Homeland Security for serious financial crimes, a source familiar with his firing told CNN. The charges are not related to the President, the source said.

Minutes after news of his departure broke, the Trump campaign announced McEntee would be joining the re-election effort as a senior adviser for campaign operations. McEntee was escorted from the White House on Monday, without being able to collect his belongings. Two sources said McEntee was pushed out because of issues with his security clearance, making him just the latest aide to be forced out because of difficulties obtaining a full security clearance.

White House aides were stunned when they learned of McEntee’s sudden departure. His abrupt firing came out of nowhere and there was no warning, they said. McEntee was one of few aides who did not have their access to the President limited when John Kelly became the chief of staff last fall. He was a near-constant presence in the West Wing, and was one of a select group of staffers who were often summoned by the President to the White House residence. He regularly traveled with Trump, and was seen boarding Marine One on the South Lawn of the White House as Trump headed for Pennsylvania on Saturday. He was scheduled to travel to California with Trump on Tuesday, but then he was fired.