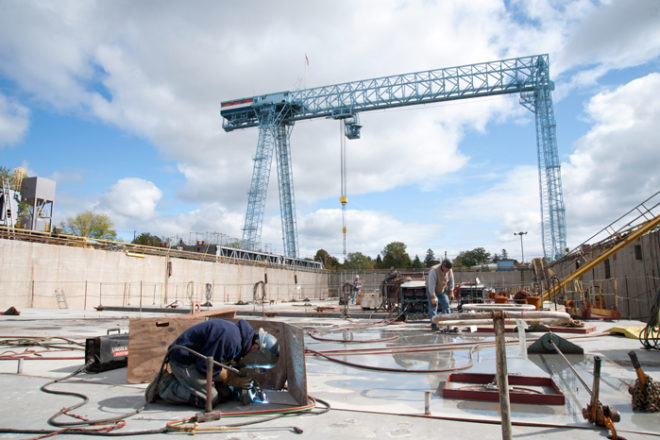 The Gantry Crane that towers over the Bay Shipbuilding yard is one of Sturgeon Bay’s most recognizable structures.

Rep. Kitchens released the following statement regarding the announcement that the Wisconsin Harbor Assistance Program has awarded $3.6 million to Fincantieri Bay Shipbuilding:

“I am incredibly pleased that the state has awarded $3.6 million in grant funds from the Harbor Assistance Program for our harbor in Sturgeon Bay. This is funding I requested in the 2017-18 biennial state budget and I am thrilled that everything is moving forward smoothly. The Fincantieri Bay Shipbuilding Company will be using these funds for the third phase of the harbor project, which will include dredging and harbor construction that will allow for deeper berths. The improvements funded by these grants will allow Fincantieri Bay Shipbuilding to accommodate heavier vessels and increase their overall winter capacity. This funding will contribute to the continued public-private partnership between the city and its largest employer, providing increased job opportunities throughout Sturgeon Bay and the entire northeast region. I would like to thank the local business community for their partnership and drive on this issue. This is something that I have been advocating for since I came into office and I believe it will be another big step forward for Sturgeon Bay’s Harbor. I look forward to seeing the boost in our economy as the harbor is revitalized in the near future.”

Gov. Walker last week announced grants totaling $8,092,555 for five harbor maintenance and improvement projects in Wisconsin, including $3.6 million for Fincantieri Bay Shipbuilding in Sturgeon Bay to improve the dock wall construction and dredge sediment to increase the production capacity of the shipyard and enhance operational efficiency. Improvements there and with the four other harbor projects will promote waterborne freight and assist economic development in the communities where they’re located. Wisconsin’s Harbor Assistance Program was created in 1979 to help harbor communities maintain and improve waterborne commerce. All applications for this program are reviewed by the Harbor Advisory Council, which includes members from the U.S. Army Corps of Engineers, UW Sea Grant, Wisconsin Coastal Management Program, Wisconsin Economic Development Corporation, Wisconsin Department of Natural Resources and the Great Lakes Maritime Research Institute. Through 2016, the Wisconsin Department of Transportation has administered more than $138 million in matching funds for 107 port preservation and improvement projects along the Great Lakes and Mississippi River. For more information about Wisconsin’s Harbor Assistance program or to review past grant awards, visit wisconsindot.gov.

Sen. Baldwin applauded the passage of the Recognize, Assist, Include, Support, and Engage (RAISE) Family Caregivers Act in the U.S. Senate. Her bipartisan legislation to establish a national strategy to support family caregivers now heads to the president’s desk for his signature. The RAISE Family Caregivers Act would direct the Secretary of Health and Human Services to develop and sustain a national strategy to recognize and support the more than 40 million family caregivers in the United States. This bipartisan legislation has been endorsed by more than 60 aging and disability organizations. “Every day, family caregivers do right by their loved ones, and today I am proud to say we are doing right by them by passing the RAISE Family Caregivers Act to formally recognize and support family caregivers across this country,” Baldwin said. “This bipartisan effort is especially personal to me as I was raised by my maternal grandparents and later served as my grandmother’s primary caretaker as she grew older. I know the challenges that family caregivers face. I’ve listened to family caregivers across Wisconsin and I will keep working to help make a difference in their lives. This reform will provide much-needed support for family caregivers and help ensure that our older adults and loved ones with disabilities receive the highest quality care in their own homes. When we work together across party lines we can get things done and I look forward to seeing President Trump sign this bipartisan legislation into law as soon as possible.”

Sen. Johnson, chair of the Senate Homeland Security and Governmental Affairs Committee, introduced a bill Jan. 11 titled Guidance Out Of Darkness, the GOOD Act, that would require federal agencies to post regulatory guidance documents online. Making regulatory guidance documents more accessible will help make agencies more accountable to following the required rule-making process and will also provide needed transparency for the American public. “In addition to facing onerous federal regulations, American businesses are also expected to follow regulatory guidance issued by agencies,” said Johnson. “Yet, unlike the public rulemaking process for regulations, federal agencies are not required to disseminate guidance broadly to the public for input, making it hard for businesses and industry groups to monitor and follow. This bill will lift the veil of secrecy by requiring federal agencies to post regulatory guidance documents in a centralized location on their websites. This common sense bill would provide much needed transparency to American businesses and consumers.”

President Trump preemptively blamed Democrats for the prospect of a government shutdown, pointing to party leaders’ demands regarding an immigration deal just four days before funding is set to run out. “The Democrats want to shut down the Government over Amnesty for all and Border Security,” Trump tweeted Tuesday. “The biggest loser will be our rapidly rebuilding Military, at a time we need it more than ever. We need a merit based system of immigration, and we need it now! No more dangerous Lottery.” In an earlier tweet, Trump wrote, “We must have Security at our VERY DANGEROUS SOUTHERN BORDER, and we must have a great WALL to help protect us, and to help stop the massive inflow of drugs pouring into our country!” The tweets come as Congress faces a deadline to fund the government by Saturday, when funding for the federal government is slated to expire.