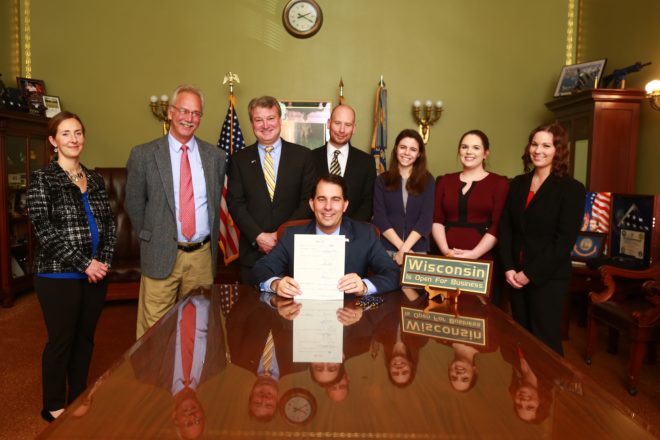 Rep. Kitchens released the following statement after 2017 Senate Bill 299, the Montessori Teacher’s License bill was signed into law as 2017 Act 106:  “I am very pleased that the Montessori Teacher’s License Bill has been signed into law by Gov. Walker. Wisconsin has been struggling with a teacher shortage the last few years, especially in rural areas, and this bill is another great step in addressing this situation. This bipartisan bill will allow for additional qualified teachers to obtain their initial teaching license without compromising the standards we hold for educators in Wisconsin. I would like to thank the Wisconsin Montessori Association, who played a crucial role in crafting this bill and getting it through the legislative process. I would also like to thank Sen. Luther Olsen (R- Ripon) for co-authoring this important bill, which plays a small but vital role in tackling our teacher shortage and will send a message that Wisconsin is actively working to address the needs of our schools and our children.”

Gov. Walker, so far, is the only elected official to be a featured speaker at a conservative conference that includes prominent conservative figures such as Donald Trump Jr., Anthony Scaramucci, Dinesh D’Souza and Sebastian Gorka.

The Student Action Summit to be held Dec. 19-22 in Tampa Bay, Fla., is organized by Turning Point USA, a nonprofit organization whose mission is “to identify, educate, train, and organize students to promote the principles of freedom, free markets, and limited government.”

“The governor always enjoys the opportunity to talk with students and our next generation of leaders,” said Walker campaign spokesman Nathan Craft. “He plans to discuss how Wisconsin’s bold, conservative reforms are producing real results for hard-working families and moving the state forward by putting the power back into the hands of the taxpayers.”

Democrats issued swift criticism of Walker’s decision to share a space with some of the featured speakers, highlighting Gorka, D’Souza in particular.

Rep. Gallagher called on his colleagues in the House to join him in supporting the Congressional Accountability and Hush Fund Elimination Act. This bipartisan piece of legislation seeks to prevent sexual harassment and assault within Congress, empower survivors, and eliminate the congressional hush fund that is currently being used to settle such claims with taxpayer money. Gallagher serves as an original co-sponsor of the bill. “Members of Congress using taxpayer dollars to cover up sexual harassment is unacceptable,” he said. “I urge my colleagues in the House to support this bill to help empower survivors, restore accountability in Congress, and protect taxpayer money. It’s time to hold Congress to a higher standard, and this bill is a necessary place to start.”

Sen. Baldwin issued the following statement after Senate Republicans passed partisan tax legislation:  “I think we need to make our tax system simpler and fairer for hard-working Wisconsin families, small businesses and manufacturers, but this partisan legislation fails to do that. This is largely a tax giveaway to the wealthiest few, big corporations and Wall Street while millions of middle class families will get a tax hike. We should do right by Wisconsin’s middle class families and reward their hard work, but this legislation rewards the top one percent and Republicans have put people’s health care on the chopping block to pay for it. That’s not right and it’s not fair.”

On Dec. 1 Sen. Johnson announced a bipartisan Senate resolution recognizing the importance and effectiveness of trauma-informed care. “Teachers, social workers and health care professionals often lack the training necessary to effectively communicate with those who have experienced trauma and to provide support to them,” Johnson said. “I hope that greater awareness of this issue will encourage more people to develop these skills and improve outcomes.”

President Trump threw his support behind controversial Alabama Senate candidate Roy Moore on Dec. 4, tweeting that “we need Republican Roy Moore to win” in order to help push through the president’s agenda. Trump has previously weighed in on the Alabama Senate race by strongly criticizing Moore’s Democratic opponent. He also told reporters in late November that Moore “says it didn’t happen” and “you have to listen to him also,” in reference to allegations that Moore molested a 14-year-old girl while he was in his 30s. Multiple women have accused Moore of making passes at them while they were teenagers and he was much older and several have alleged he acted sexually inappropriately with them. A slew of Republicans have called on Moore to drop out of the race. Moore has denied the accusations. The Alabama Republican celebrated the president’s endorsement later Monday morning, sharing Trump’s online post with his own Twitter followers and adding that he was “thankful for President Trump’s support. The America First agenda will #MAGA. Can’t wait to help him #DrainTheSwamp.”