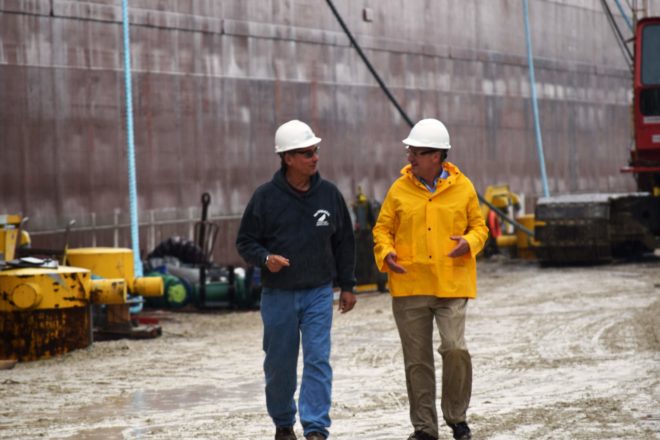 Rep. Kitchens released the following statement after the Joint Finance Committee’s decision to provide funding for the Sturgeon Bay Harbor Project:  “I am incredibly pleased that yesterday the Joint Finance Committee approved my motion requesting a $3.2 million grant from the Harbor Assistance Program for our harbor in Sturgeon Bay. The Fincantieri Bay Shipbuilding Company will be using this fund for the third phase of the harbor project, which will include the dredging and harbor construction. Fincantieri Bay Shipbuilding is the largest employer in Door County and has spent several years working on the harbor project.

“This funding will allow the public-private partnership between the city and one of its key business partners to go forward full speed ahead and continue their modernization of the harbor. Not only will this harbor provide opportunities for additional employment, but it will send a signal to those in the region that industry in northeast Wisconsin is thriving and welcome in Sturgeon Bay.

“I want to thank the Joint Finance Committee for recognizing the benefits of funding this harbor project and I want to thank the local business community for their partnership and dedication to this issue. This is something that I have been working on since I came into office and this is another big step forward for Sturgeon Bay’s harbor. I will continue to advocate for this funding to remain in the budget and I am eager to see our harbor revitalized in the not so distant future.”

On Sept. 5, the Joint Finance Committee (JFC) approved a $3.2 million grant from the Harbor Assistance Program for a dock construction and dredging project in the Sturgeon Bay harbor. This grant for up to $3.2 million of the total cost of the project will assist Fincantieri Bay Shipbuilding of Door County in phase III of the harbor project. Sen. Lasee issued the following statement about JFC’s approval of the proposal:  “I thank my Senate and Assembly colleagues and their staffs for recognizing the importance of this proposal for Sturgeon Bay, Door County and Northeastern Wisconsin. The $3.2 million investment approved by Joint Finance Committee will help keep the company vibrant and anchored to Sturgeon Bay. The construction and dredging project will increase vessel construction and winter repair capacity in the Sturgeon Bay Harbor. Having room for additional vessels in the harbor will create even more employment opportunities than the 1,000 full-time employees already working throughout the year at Fincantieri Bay Shipbuilding. Wisconsin shipbuilders’ craftsmanship and ingenuity is sought by companies and individuals from all over the world. Updating and improving the harbor will keep Wisconsin competitive with other world-wide shipbuilders,” Lasee said.

Gov. Walker has begun a weeklong trade mission that will take him to Japan and South Korea. Walker says he and state economic development officials were participating in a meeting of the Midwest U.S.-Japan Association. The group includes Japanese corporations that have economic ties in the Midwest or are trying to develop them. Walker also met with the president of Komatsu, the Japanese company that acquired mining equipment manufacturer Joy Global in April. Walker says he thanks company leaders for keeping existing operations in Milwaukee. The state’s 22-member trade mission delegation includes 13 executives from eight Wisconsin companies. They are in Japan through Tuesday before heading to South Korea. They are to return over the weekend.

Rep. Gallagher voted in favor of an amendment to increase funding for the U.S. Department of Transportation’s- Maritime Administration (MARAD) Small Shipyard Grant Program that awards federal grants to small shipyards across the country. The grants help small shipyards repair and modernize equipment, increase efficiencies and productivity, and compete in the global marketplace. Gallagher is an original co-sponsor of the amendment. He released the following statement after the amendment passed:  “I was proud to push this amendment through the House for the highly dedicated workers in the 8th District who play an important role in addressing our urgent national security, military and economic needs through our strong shipbuilding tradition. Not only is the Small Shipyard Grant program vital to strengthening our ship building capacity, but also to making sure our local shipyards are able to invest in modern equipment and a high-skilled workforce that supports thousands of good-paying jobs in northeast Wisconsin.”

Sen. Baldwin called on President Trump to make good on his pledge to close the carried interest tax loophole and act on her Carried Interest Fairness Act. “I believe our goal for tax reform must be reducing taxes on small businesses to spur economic growth and cutting taxes on working class Americans so people can keep more of what they earn,” Baldwin wrote. “Tax reform cannot leave working families behind – it needs to help them get ahead. If you are in fact serious about closing the carried interest tax loophole for hedge fund managers on Wall Street, I have legislation to do just that and I would welcome your support in passing it in Congress. My tax reform legislation is just one way we can work together to put more money into the pockets of everyday hardworking people, while keeping your promise to them.”

President Trump has made statements, both as a candidate and as President, pledging to close the carried interest tax loophole. However, the one-page tax reform outline that President Trump released in April failed to mention closing the loophole, and neither Majority Leader Mitch McConnell nor Speaker Paul Ryan have acted on advancing legislation to address this issue.

The carried interest tax loophole benefits certain investment fund managers – including private equity fund managers – by allowing them to take advantage of the preferential 20-percent tax long-term capital gains rate on income received as compensation, rather than the ordinary income tax rates of up to 39.6-percent that all other Americans pay. Senator Baldwin’s Carried Interest Fairness Act would end this loophole by ensuring that income earned by managing other people’s money is taxed at the same ordinary income tax rates as that of the vast majority of Americans.

Sen. Johnson is demanding full transcripts from interviews the Office of Special Counsel (OSC) conducted with former FBI staffers for James Comey, becoming the latest lawmaker to dig deeper after the documents raised questions about the bureau’s handling of the Hillary Clinton email case and the ex-director’s statements to Congress. The White House on Monday accused Comey of giving “false testimony,” and Sen. Lindsey Graham, R-S.C., told Fox News last week he wants Comey to return to Capitol Hill – saying “I smell a rat.” Johnson, chair of the Senate Homeland Security and Governmental Affairs Committee, made his request for the full, un-redacted transcripts in a letter to Acting Special Counsel Adam Miles. “The Committee has conducted oversight of the FBI’s investigation into Secretary Clinton’s use of a private email system. The information in OSC’s possession could further explain the scope, course, and nature of the FBI’s investigation,” Johnson wrote on Sept. 8. The transcripts were from interviews conducted by the OSC with James Rybicki, Comey’s former chief of staff, and Trisha Anderson, the principal deputy general counsel of national security and cyber law. The Senate Judiciary Committee earlier received redacted transcripts of the interviews, revealing last month that they include claims that Comey “wrote a draft” of an “exoneration statement” for Clinton around early May 2016.

Former President Jimmy Carter offered a damning indictment of U.S. foreign policy and domestic affairs Tuesday, saying money in politics makes the nation more like an “oligarchy than a democracy” and casting President Donald Trump as a disappointment on the world stage.

Carter’s criticisms, offered at his annual presentation to backers of his post-presidency Carter Center in Atlanta, went beyond Trump, but he was particularly critical of the nation’s direction under the Republican president’s leadership.

The 39th president offered this advice to the 45th:  “Keep the peace, promote human rights and tell the truth.”

Carter, 92, did not mention explicitly Trump’s threatening exchanges this summer with North Korean dictator Kim Jong-un, but the former president said the U.S. should engage directly with the insular leader and discuss a peace treaty to replace the cease fire that ended the Korean War in 1953.