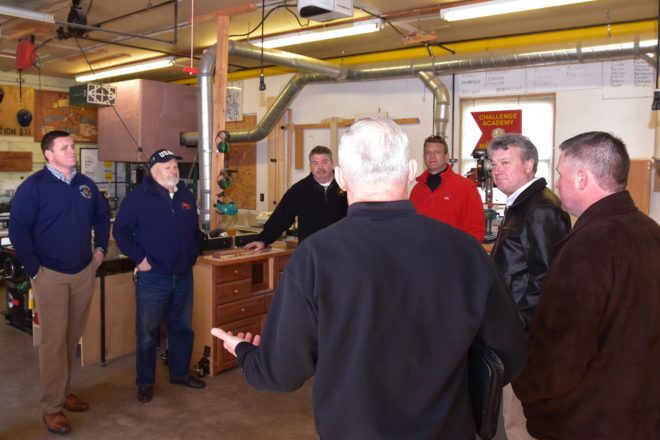 Rep. Joel Kitchens (second from right) and other state legislators learned about the Challenge Academy on a recent visit to the program for at-risk youth. Submitted.

Rep. Kitchens was among a group of state legislators from across Wisconsin who met with cadets and staff from the Wisconsin National Guard Challenge Academy Nov. 29 to gain a better understanding of the program and the youth who participate in the program. Challenge Academy is a two-phase program – a 22-week residential phase and a 12-month post-residential mentoring phase designed to assist at-risk youth change their course in life and obtain their High School Equivalency Diploma (HSED). The program also includes character development, leadership, and anger and stress management.

The legislators received an overview of the program from staff, toured the campus, and met with staff and cadets.

“The best part was hearing the stories of the kids we talked to and hearing about how the program has changed them for the better,” Kitchens said. “It sure seems like it’s going to make a difference in the rest of their lives. I plan to encourage more schools to think of this program more frequently, because you can see this is a tremendous opportunity for kids to turn their lives around.”

The overall mission of the Challenge Academy is to offer cadets the opportunity to develop the strength of character and life-skills necessary to become successful, responsible citizens.

Both males and females may voluntarily participate in the program, but participants must meet certain criteria: cadets must be between the ages of 16 years and nine months and 19 years old, have no felony charges or convictions, and have a legal residence in Wisconsin.

This year, the Wisconsin program will conduct its 40th class and celebrate 20 years of helping Wisconsin’s youth become successful, responsible citizens. Nationally, the National Guard Youth Challenge Program will celebrate 25 years and has helped more than 150,000 youth since 1993.

Rep. Gallagher led a group of his Wisconsin colleagues in a letter to House Agriculture Chairman Mike Conaway to make clear their policy priorities in the 2018 Farm Bill. In the letter the lawmakers specifically call for changes to the Dairy Margin Protection Program, which is designed to compensate producers for losses when their dairy margins fall below the coverage levels they have purchased. “For too long hardworking farmers in Northeast Wisconsin and across the country have been paying into a program that does not give them the results they need,” Gallagher said. “As Congress begins to debate the upcoming Farm Bill, I will work with my colleagues to improve the MPP-Dairy program so that it is effective in meeting the challenges farmers face in an increasingly volatile market.”

Sen. Baldwin, a member of the Senate Health, Education, Labor and Pensions (HELP) Committee, announced her support as an original cosponsor of legislation that would increase funding for biomedical research. The National Biomedical Research Act, introduced by Senator Elizabeth Warren (D-MA), would increase funding for targeted biomedical research initiatives through a new, reliable funding stream supporting the National Institutes of Health (NIH) and the Food and Drug Administration (FDA). The purchasing power of the NIH has been cut by Congress for more than a decade. This funding boost would help restore the NIH budget roughly to its 2006 levels, adjusted for biomedical inflation.

“As the granddaughter of an NIH-funded scientist, I have long championed strengthening our research enterprise. That’s why I’ve introduced legislation to improve opportunities for young researchers, and that’s why I’m cosponsoring the National Biomedical Research Act to ensure stronger investments in biomedical research,” Baldwin said. “Now more than ever, we must protect and strengthen our investments in research, science and innovation. I’m proud to join Senator Warren in this effort, and I look forward to supporting this legislation in committee.”

During a recent HELP committee hearing, NIH Director Francis Collins confirmed that currently, NIH only funds about 19 percent of the grant applications submitted by research scientists, including many high-quality applications that would advance biomedical science. The National Biomedical Research Act would create the Biomedical Innovation Fund, a new fund designed specifically to provide predictable investments in life-saving biomedical research conducted by leading scientists at the nation’s top research institutions. The funding would provide $5 billion annually in supplemental funding for grants for young emerging scientists, and breakthrough research that will help accelerate the development and approval of new medicines, improve prevention, and increase understanding of life-threatening diseases.

Sen. Johnson continues his efforts for small businesses in the GOP tax reform conferencing between the House and Senate, saying the “Joint Committee on Taxation is completely in La La Land” on potential revenue losses that will “hemorrhage” from federal tax rolls.

“I’m really concerned that if we don’t close that widened disparity between pass-throughs and C corps, we will incentivize pass-throughs to convert to C corp status, and we will hemorrhage revenues of the federal government,” Johnson said. “A lot of my colleagues aren’t really focusing on that, and the Joint Committee on Taxation is completely in La La Land denying that potential reality.” Johnson has been an outspoken critic of the Senate GOP Tax Cuts and Jobs act on behalf of small “pass-through” businesses having a tax rate competitive with corporations, despite voting yes on the Senate bill which is currently in conference with the plan the House passed before Thanksgiving.

“President Trump has committed assault, according to these women, and those are very credible allegations of misconduct and criminal activity, and he should be fully investigated and he should resign,” Gillibrand told CNN’s Christiane Amanpour in an exclusive interview.

“These allegations are credible; they are numerous, ” said Gillibrand, a leading voice in Congress for combating sexual assault in the military. “I’ve heard these women’s testimony, and many of them are heartbreaking.”

If he does not “immediately resign,” she said, Congress “should have appropriate investigations of his behavior and hold him accountable.”

Later on Monday, Democratic Sen. Ron Wyden of Oregon also commented on whether Trump should resign, encouraging Capitol Hill to investigate. “These women are right. If @realDonaldTrump won’t resign, Congress must investigate allegations by many, many women that he sexually assaulted and harassed them. No one is above the law,” he tweeted.

Responding to UN Ambassador Nikki Haley saying Sunday that Trump’s accusers “should be heard,” Gillibrand said Monday, “Not only should women be heard, but they should be believed.”

The White House said:  “These false claims, totally disputed in most cases by eyewitness accounts, were addressed at length during last year’s campaign, and the American people voiced their judgment by delivering a decisive victory. The timing and absurdity of these false claims speaks volumes and the publicity tour that has begun only further confirms the political motives behind them.”

The president rejected such allegations last year and vowed to sue the accusers, though no lawsuit has yet been filed.