Rep. Mike Gallagher and Rep. Seth Moulton (D-MA) introduced HR 873, a bipartisan bill allowing the establishment of the National Global War on Terrorism Memorial in Washington D.C. The bill aims to commemorate and honor the members of the Armed Forces that served in defense of the United States in the Global War on Terrorism. Both Rep. Gallagher and Rep. Moulton are post 9/11 Marine Corps veterans who served in Iraq. “Republican or Democrat, it doesn’t matter. Memorializing the service and sacrifice of more than 6,800 fallen United States service members is an American matter, and I’m proud to introduce this bipartisan legislation with my fellow Marine and current colleague, Congressman Moulton,” stated Rep. Gallagher. “During my service in the Marine Corps I served alongside countless brave men and women, some of whom paid the ultimate sacrifice in the Global War on Terrorism. This piece of legislation honors their service and memorializes their legacy for future generations.”

“I served in Iraq with some of the best Americans I know, and we owe this to all of them, to their families, and to the young men and women who continue put their lives on the line for us today,” said Rep. Seth Moulton (D-MA). “I’m proud to introduce this bipartisan legislation with my colleague in Congress and fellow Marine, Congressman Gallagher.”

This bill exempts the Memorial from current law which prohibits commemorations from being authorized on federal land until at least ten years after the officially designated end of a conflict. Unlike most previous conflicts, the Global War on Terror is an ongoing fight, so this legislation would enable us to pay tribute to those who have served, and continue to serve. 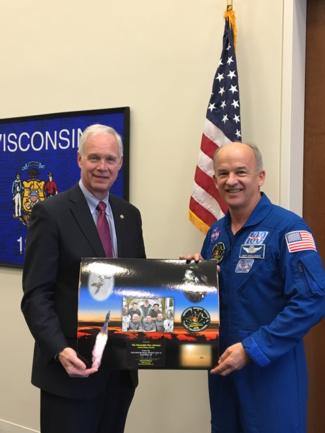 Sen. Johnson met with Wisconsin native and NASA astronaut Jeff Williams to discuss the NASA Reauthorization Bill signed into law by the president. Williams was the commander of the 48thExpedition to the International Space Station in 2016, and he presented the senator with a photograph of the mission’s crew. He is originally from Winter, Wis., and currently holds the U.S. record for most days spent in space.

Sen. Baldwin re-introduced “Buy America” legislation that would help rebuild America’s crumbling drinking water infrastructure with American made iron and steel. She made the announcement at Neenah Foundry, a Wisconsin manufacturer that helps build our nation’s infrastructure. “Wisconsin manufacturers and workers, like the men and women who work at Neenah Foundry, help build our nation’s water infrastructure and they deserve a solid commitment from Washington on a strong Buy America standard that rewards their hard work. This legislation provides that standard and its past time to get the job done because workers cannot afford to have government spending taxpayer dollars on foreign products. We must rebuild our country’s infrastructure with American labor and American products,” said Baldwin. “The choice for the Republican establishment in Washington is clear: Do you stand with American manufacturers and workers or do you support spending taxpayer dollars on Chinese and Russian steel for American water infrastructure projects?”

Baldwin introduced the legislation last year and the “Buy America” standard passed the Senate with broad bipartisan support (95-3). However, Speaker Paul Ryan and the Republican House Leadership stripped it from the final water infrastructure bill.  Baldwin then introduced an amendment to restore her Buy America reform and demanded a vote. Majority Leader McConnell blocked a simple request to consider the amendment and obstructed a vote in the Senate.

Senator Baldwin’s Made in America Water Infrastructure Act, requires that 100 percent American-made iron and steel is used in water infrastructure projects funded by the Drinking Water State Revolving Fund (DWSRF). The Drinking Water State Revolving Fund is a federal-state partnership that acts as an infrastructure bank to help ensure safe drinking water all 50 states and territories. Between 1997 and 2015, the DWSRF program provided more than $27.9 billion in low interest loans to more than 12,000 projects. Senator Baldwin’s reform would require all of these projects to use American-made iron and steel. Eligible projects include improving drinking water treatment; fixing or replacing old pipes; improving the source of the water supply; replacing or constructing finished water storage tanks; or any other infrastructure projects needed to protect public health.

On March 28, President Trump signed a much-anticipated executive order intended to roll back most of President Barack Obama’s climate-change legacy, celebrating the move as a way to promote energy independence and to restore thousands of lost coal industry jobs. Flanked by coal miners at a ceremony at the Environmental Protection Agency, Trump signed a short document titled the “Energy Independence” executive order, directing the agency to start the legal process of withdrawing and rewriting the Clean Power Plan, the centerpiece of Obama’s policies to fight global warming. The order also takes aim at a suite of narrower but significant Obama-era climate and environmental policies, including lifting a short-term ban on new coal mining on public lands.

The executive order does not address the United States’ participation in the 2015 Paris Agreement, the landmark accord that committed nearly every country to take steps to reduce climate-altering pollution. But experts note that if the Trump program is enacted, it will all but ensure that the United States cannot meet its clean air commitments under the accord.