EPHRAIM, WI — At a press conference Monday, Wisconsin Governor Scott Walker announced an agreement to lease Peninsula State Park to a New York-based fund in a 99-year, $1.1 billion deal. The lease is aimed at helping to close the state’s projected $3.6 billion budget deficit for 2012-13.

Luxury-Tech LLC, an infrastructure investment fund managed by oil tycoon and Republican billionaire-donor Kroch Davis, submitted the winning bid for the rights to the 3,776 pristine acres atop the Niagara Escarpment. 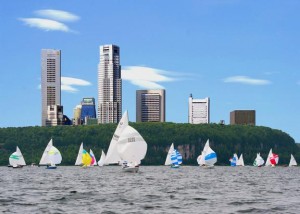 In stark contrast, the park’s newly instituted development plan calls for the immediate cessation of all public access.

All main arterial roads leading into the park will be barricaded and policed by an independent security company. In accordance with terms of the lease, Wisconsin Coast Guard vessels will monitor surrounding waterways and intercept any potential trespassers.

Luxury-Tech development plans call for the construction of several opulent condominium towers, to run the length of the park’s eastern bluff, varying in size from 6 to 36 floors. The glass and steel-framed structures will overlook Eagle Harbor and the Village of Ephraim, and promise ‘world-class views for world-class clientele.’

Speaking before a small group of benefactors, Walker lauded the economic prospects of the lease agreement.

“For too long, our Wisconsin State Parks have been a shining example of big-government, liberal elitism. It’s time to throw off the socialist, unionized shackles of our past, and step into the bright light of financial freedom. Today is a great day for Wisconsin,” said Walker, in reference to the privatization of a park that had formally been revered universally as a state treasure. “It’s time to give back to the people that can actually afford it.”

The Governor’s remarks were delivered before a backdrop emblazoned with the words ‘Wisconsin Belongs to the Working Man.’ An aide later confirmed that the banner referred to the wealthiest 1 percent of working American men, the demographic most likely to purchase one of the soon-to-be-built million-dollar penthouses.

Later during the press conference, Davis stepped to the lectern and unveiled an artist’s rendering of the new development.

“This is a deal brokered by men who pulled themselves up by their own bootstraps and decided to make it in this world,” said Davis, whose road to billions was paved by his family’s oil business, Davis Industries. “If you want to take a walk in the park in the 21st century, then I say work harder, and buy yourself a park.”

The new lease agreement has spawned vocal demonstrations both locally and nationally.

“This is an utter outrage – it’s tantamount to generational theft,” said Ephraim resident Michael Bertrand, one of several hundred protestors at the Governor’s speech. “Sadly, Scott Walker is yet another in a long line of Republicans who have convinced scores of middle-class Americans to vote against their own self-interests.”

In the wake of today’s press conference, news broke that construction in the newly leased park has already begun.

Work is underway on the demolition of Peninsula State Park Golf Course. Luxury-Tech plans to pave an aircraft runway down the length of the course, stretching northward from the park’s border with State Highway 42.

“Landing a Learjet 45XR requires just over one mile of tarmac. The relatively gentle grade of the existing golf course presents the ideal environment in which to construct such a runway,” said a Luxury-Tech spokesperson. “Obviously a million-dollar client deserves a million-dollar parking spot.”

A spokesperson from the Governor’s office, speaking on condition of anonymity, said that the Peninsula State Park lease merely represents the ‘tip of the iceberg,’ and is actually part of an elaborate plan to close Wisconsin’s ‘budget gap’ once and for all.

“Up next, look for Governor Walker to take on the liberal elites who run Wisconsin’s municipal water systems. His message will be clear: if you think you deserve clean drinking water, go buy a bottle of Evian. Just don’t expect any handouts.”