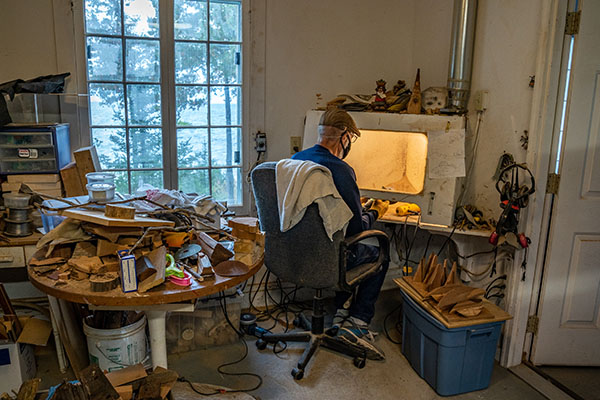 Artist David Frykman in his studio working on pieces of the deconstructed Eagle Tower. Photo by Luke Collins.

Since likely any of us can remember, Eagle Tower in Peninsula State Park was a fixture on the landscape — as familiar and beloved to Door County as cherry trees and lighthouses.

Whether or not you huffed up the 75-foot-high structure perched atop a 180-foot limestone bluff to take in an epic view of the park’s swaying treetops; the calm or stirring waters of Eagle Harbor and Green Bay, often dotted with sailboats, kayaks and pontoons; and the white steeples of Ephraim, the tower is a part of our collective memories, conjuring up nostalgia for anyone with a soft spot for Northern Door.

That includes artist David Frykman, who was not especially fond of climbing the 108 steps to the top.

“I was terrified of going up,” Frykman said. “But I did. And to my family, that tower was something very special.”

Originally built in 1914 and rebuilt in 1932, the tower offered his grandchildren the chance to be the fifth Door County generation to climb. For his daughter, Sara, and all of Gibraltar High School’s cross-country teams before and after, the tower was a regular part of their training route — a rite of passage.

“It means a lot to [Sara],” Frykman said. “There’s also a story that somebody threw some pumpkins off the tower. She denies it … kind of.”

The tower was the scene of many proposals, the setting of millions — perhaps a bazillion — photos, and a traditional stop for families before setting up camp or taking a dip at Nicolet Bay.

So as expected, there was lots of sadness and some controversy when Eagle Tower was deemed unsafe and ordered taken down in 2016, but even the woodpeckers knew the posts were rotting out. Frykman held up a chunk of western red cedar — a part of the post of the old tower bearing a square hole that’s characteristic of pileated woodpeckers.

“They’ll drill into a hollow stump and eat the ants,” he explained. “There were a bunch of those in the tower. They knew there were ants in there.”

Once it became clear just how unsafe the tower was, there seemed to be a collective peace about erecting something newer, safer and accessible to all. Although the new tower will feature the zig-zagging steps like the old one, it will also include a ramp that rises through the trees to its very top.

“The new tower will be special, too,” Frykman said. “Meanwhile, people like to have a piece of the old tower.”

And Frykman gives them exactly that by creating many whimsical carvings from pieces of the old tower: fawns, foxes, goats, squirrels, rabbits, bears and of course the charming, bearded men for which he is well known. Their tall, pointy hats bear the shapes of trees, eagles and even the tower itself.

The carvings began as a means to raise money to construct the new tower. The Friends of Peninsula State Park reached out to artists to create artworks from the old tower to auction off, and Frykman answered the call.

Though he’s worked with repurposed wood before, this batch presented more than a few challenges: rusty nails, layers of paint and tar, knots, 83 years’ worth of sand and grit, and the wear and tear that comes from millions of sweaty hands and rubber soles climbing up and down, up and down.

“You have to have the right tools,” Frykman said. “I use power tools, so I can go through knots and difficult parts, whereas a chip carver might struggle with that. You’re not gonna use a knife and gouge on this stuff.”

Frykman’s process begins by taking up pencil and paper — something he’s done since grade school.

“I have stacks of sketchbooks,” he said. “I’ll draw an animal and then turn my brain into three dimensions. Then I’ll make a cardboard pattern.” He lays out the pattern on the wood, trying to get the most out of it.

“It’s precious stuff, and I don’t have all that much,” he said, pointing out that his carvings are made from multiple pieces. “It’s a lot more efficient than trying to carve it all out,” he explained. “I make no secret of it. I like showing the seams. ‘Cut and paste,’ I call it.”

Donning thick, rubber gloves and ear protection, Frykman carves away in a brightly lit dust-collector booth using disc sanders, flap sanders and die grinders. He never makes one individual piece at a time; instead, he makes 30 at a time and saves the pattern for the next round.

“I probably won’t use the same pattern when I’m coming back to that animal, but I’ll use it as a reference,” he said. “There are always changes I want to make.”

Most of Frykman’s earlier carvings are painted completely, but with the Eagle Tower pieces, he’s more sparing.

“I like to show the wood in the tower carvings — show the age, the tar paint,” he said.

Frykman’s approach to carving is an unusual one in the grand scheme of the art.

“We all stand on the shoulders of giants,” he said. “I’m not going to pretend I invented this. On the other hand, nobody does it the way I do it.”

Frykman’s craft and style are products of a combination of influences and training. He was a potter for 10 years, took up ice carving on a whim and studied the techniques of duck-decoy carvers. (He’s also an amazing oil painter.)

“That’s what I do,” he said. “Switch gears. Really, you just have to go out there and try stuff and figure it out.”

After the auction ended and enough money had been made, Peninsula State Park still had a pile of old tower materials left over.

“They wanted to sell the wood to anybody who would buy it, so I bought as much as I could afford,” Frykman said. He loaded up his pickup truck, wrote a check and continues to create something special from each piece of Door County’s past.

Meanwhile, the new tower is projected to open in the spring of 2021. Soon it will be as familiar as the old tower: a setting for more proposals, more photos and more traditions.

“I’m sure future cross-country teams will run up and down that ramp like crazy,” Frykman said.