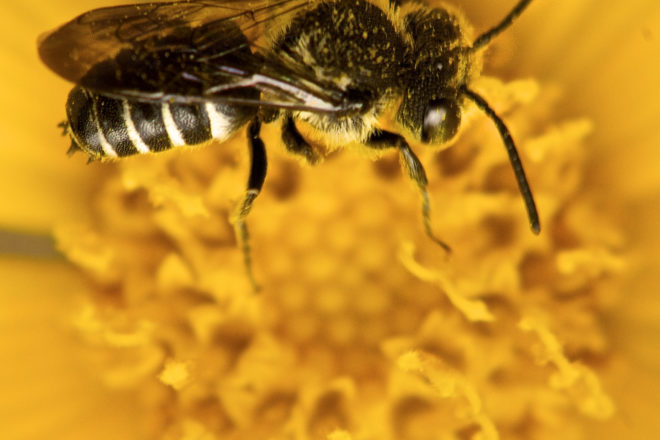 Researchers at the Peninsular Agricultural Research Station (PARS) are hoping to attract hordes of bees, wasps and flies next summer. Workers at the station have planted two native pollinator plots on the grounds north of Sturgeon Bay.

The idea behind it is similar to that of prairie restoration with the “natural side benefit of good habitat for native pollinators, along with the goal of continuing a rare ecosystem into the future,” said Daniel Kielar, manager of fields and orchards at the station.

The native pollinator plot project is a collaboration between PARS, U.S. Fish and Wildlife Services and UW-Extension. The idea was brought to light by Kielar, Annie Deutsch, agriculture educator at UW-Extension and Jamie Patton, senior outreach specialist with UW-Madison’s Nutrient & Pest Management Program.

A study being conducted on grapes had finished earlier this year, so the station had no use for the fruit any longer. The station decided to remove the plants and found themselves with some open land to begin a new project.

U.S. Fish and Wildlife provided the seeds and equipment for the endeavor, PARS provided the field preparation and the manpower for planting, and UW-Extension provided input on the size of the field and seed planting.

They aren’t restoring a prairie, but instead creating plots with an assortment of seasonal flowers and grasses that grow from late spring to October, like black-eyed susans, milkvetch and foxglove. The seeds are planted in blends with the sole purpose of attracting native pollinators.

“It will be interesting to see what kind of germination rates we get and what kind of growth, and which ones, over the next couple years or so, which species [of plant] kind of dominate,” Kielar said. “You’ll hopefully have a good blend.”

These species are ones like honeybees, along with other insects like wasps and flies that also pollinate but are lesser known. They hope to help mitigate the loss of honeybees and also to encourage cross-pollination between the new plots and existing plots.

Max Martin, project manager at the potato genebank and co-president of the Door County Beekeepers Club, is likely to keep a watchful eye on the project.

The plots, one a three-quarter acre, and one half-acre, were planted Nov. 19. Planting occurred later in the season to ensure that everything that was there prior was done growing. That way new seeds wouldn’t compete with any old seeds that would sprout in the spring.

“There’s still certain grasses and things that will continue growing if we get a warm spell,” Kielar said.

The plots are located along the highway, so when they bloom in the spring, passersby will be able to observe the natural beauty, Kielar said. They hope to make the plots available for public viewing in time for field days (events open to the public that share research updates and educational information), with ideas of creating a walking path between each plot.

It was important to the team to also ensure these plots could be cared for pesticide-free.

Some potential obstacles include keeping weeds out, “weeds” being sprouts from plants that were there beforehand. As an example, if a farmer went from planting corn for three years to planting soybeans, there might be some “volunteer” corn that sprout with the soybeans, in which case they’d be considered weeds.

“Some weeds can be in the ground 50 years before it actually sprouts,” Kielar said.

The plots can also be used for research opportunities for graduate students and faculty at UW-Madison to study what kind of insect populations are attracted to the plots.

The station hopes to see growth by this spring and summer, and if not then, during the following cycle.