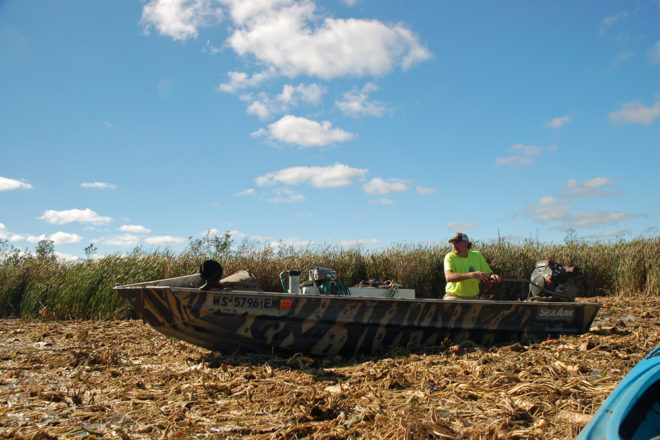 Jason DeVries of PCi Dredging mans a Sea Ark Mud Runner to easily navigate the shallowest parts of Dunes Lake in order to run supplies and men to the dredge. Photos by Len Villano.

All the way down the twisting Geisel Creek, a heavy machine droned incessantly through the cedar and aspen forest – sometimes amplified and sometimes muffled by that forest as our kayaks headed toward the source of the sound, a hydraulic dredging machine that for the last three weeks has been clearing out a two-acre section of Dunes Lake.

“It’s one of those lakes that’s a forgotten lake, a hidden lake, an ugly duckling, I don’t know which one you want to call it. It’s out of sight, out of mind,” said Greg Coulthurst, a county conservationist with the Door County Soil and Water Department.

Coulthurst represents the county in a partnership that is overseeing a pilot project the partners hope will eventually stop the advanced aging process that has been turning Dunes Lake into a marsh. Becoming a marsh is part of the succession – or the aging process – of a lake, but Coulthurst and others involved say what has happened to Dunes Lake is not natural and that it has been cheated out of its youthful lake years by human influence from various sources in the form of phosphorous overload.

“Basically, the lake was succeeding to a marsh must faster than it should,” Coulthurst said. “If you look at the inner lake, which is surrounded by cattails now, you can see how it is really being impacted by phosphorus loading. It’s becoming a muck wetlands. Cattails are encroaching several feet ever year. We know the high nutrients coming through there are impacting the system.”

Mike Grimm, conservation ecologist with the northeast Wisconsin branch of The Nature Conservancy, said he and recently retired county conservationist Bill Schuster became concerned about Dunes Lake a decade ago.

“It just was apparent to us that lake was accelerating in age much faster than we would expect an alkaline lake,” Grimm said. “It was changing from an alkaline fen-type lake to eutrophic marsh lake.”

The Nature Conservancy was interested because their Shivering Sands Natural Area is just downstream of Dunes Lake.

“The lake is doing a great job of cutting off some of the nutrients that would flow into Lake Michigan, at its own expense. It’s sort of sacrificing itself for Lake Michigan,” Coulthurst said.

After the pleasant paddle of a mile or so down Geisel Creek – the only way to reach Dunes Lake – we entered what almost appeared to be a doorway between the cattails that thickly surrounded the entire lake, although at this point “lake” seemed far too generous a word for this mudhole we were now in. At some points we were paddling in mere inches of water, dipping our paddles into the soft, muddy bottom just to get some traction and move ourselves along. You could easily stick your paddle four feet deep into the soft, gray muck.

After muscling my kayak through the piddling water and thick mud and an even thicker blanket of cattail rhizomes, I finally reached the newly open water of Dunes Lake, where I could stick my paddle down into four feet of water before hitting bottom. It was a beautiful thing to see, and even better to effortlessly paddle across it.

At the north end of that area, the dredge sat suddenly silenced. 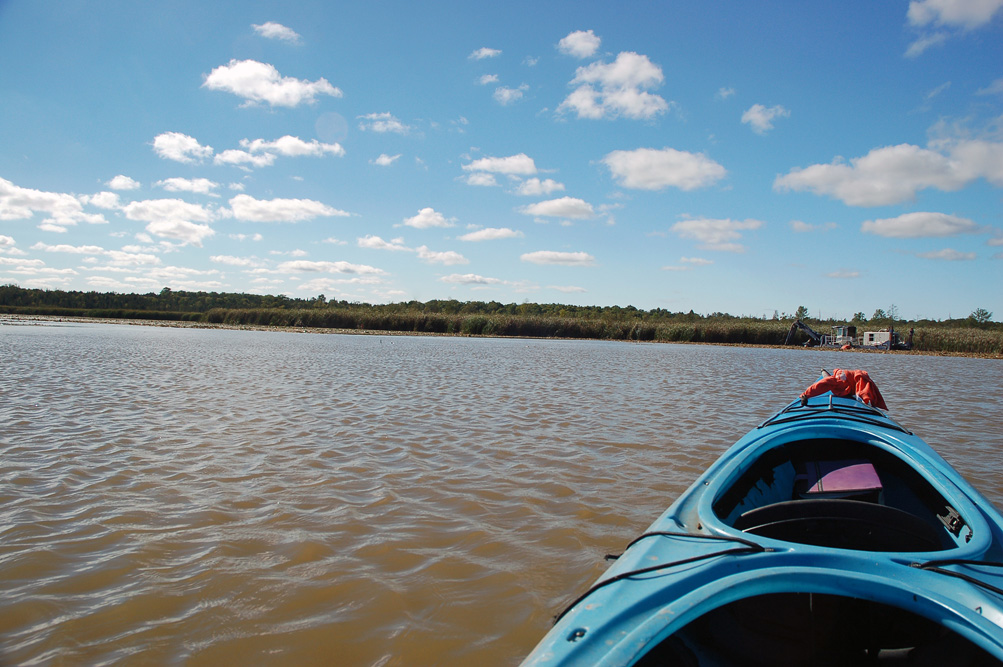 This is a section of the pilot project dredging, where Dunes Lake has been restored to open water with a depth of about four feet, compared to unrestored areas of the sediment-filled lake that range from about a feet deep to mere inches.

Just before we arrived, PCi Dredging employee Jason DeVries had arrived at the dredge on a Sea Ark mudboat to deliver some brackets that dredge operator Randy Ceplina wanted to change out with some that were wearing on the dredge.

The hydraulic dredge is really just a giant floating shop-vac. In this case, it vacuumed the mucky water of Dunes Lake, sent the water through a tube to a 6,000 cubic foot capacity pool – or dewatering basin – 3,500 feet away from the lake. Flocculants and coagulants were added to the mud-laden water, and then it was returned, without sediment, to the lake in another tube.

“It’s quite the project. A lot of magic going on there,” Coulthurst said. “It’s the first time I’ve been on a project like this and it’s been amazing that they can pump muddy slurry into a pit, add coagulants and flocculants and have it settle out and be able to pump out clear water to a project site. A lot of permitting and a lot of planning made that happen.”

Grimm said the first five years of this project was occupied with trying to understand the watershed system through research and monitoring.

“From there we worked out a plan, an idea for restoration,” he said. “We recognized we couldn’t take it back to pre-settlement conditions. We worked up several approaches to try to restore the lake. This is a watershed approach, not just looking at the lake itself, but looking at surface and ground watersheds. They are very similar, and overlap quite a bit in this case.”

“We put together a report and identified some of the sources [of pollution],” Coulthurst said. “We started addressing some of the nonpoint sources. We’ve got the entire watershed under nutrient management plan, so that’s good. We’ve addressed a couple of ag waste sites. There’s still one we’re working on. The [Sevastopol] sanitary district still has their sanitary ponds and they’re still contributing to the system, but we don’t regulate the sanitary ponds, so that’s kind of an uphill battle.” 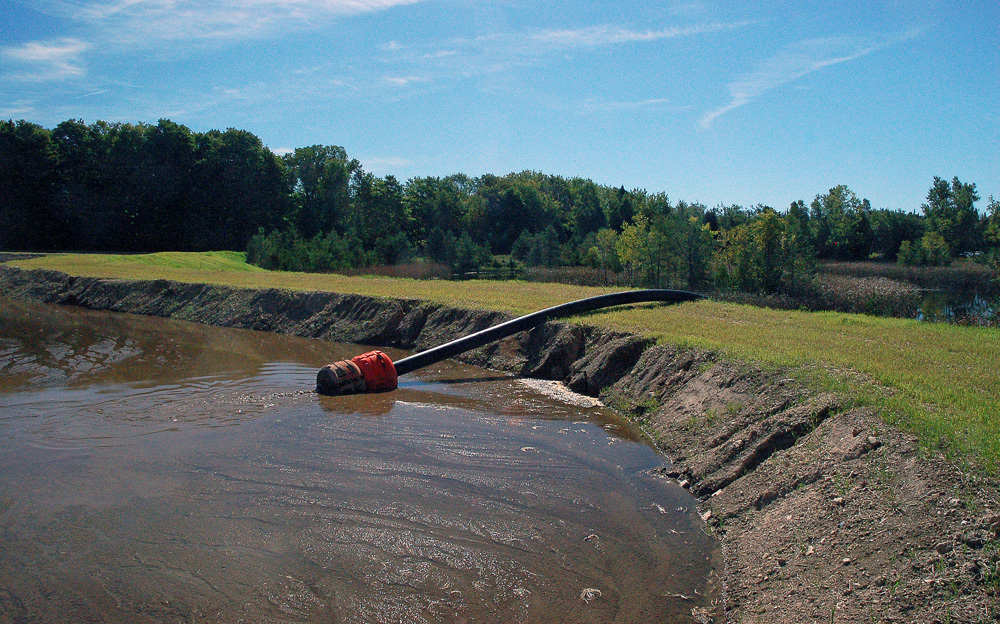 The heavily sedimented water was dredged and then pumped through 3,500 feet of tubing to this drainage pond capable of holding 6,000 cubic feet of material. Flocculants and coagulants are added to filter out the sediment and clear water is pumped back into the lake.

Now with an understanding of what was speeding the aging process of the lake and controls in place to reduce phosphorus input to the watershed, the county went in search of a grant to clean the lake.

“A couple years ago we applied for a very large grant. I think we were asking for a couple million dollars,” Coulthurst said. “We basically wanted to hydraulically dredge the entire lake and open up those cattails to allow fish better access. We were denied the grant and what we found out is that we didn’t get as many points for not having public parking or access to lake. So that was a big issue. At that time we didn’t have a friends group. We’re trying to get a friends group established. They questioned some of our cost estimates for dredging. We were going to dredge about 20 acres of that basin, at least. We’re currently doing about two acres. They wanted us to do a pilot dredge basically to get more points. So that’s what we’ve been doing here in the last couple years, getting enough money to do this pilot project.”

Ducks Unlimited became a major partner in the pilot project, providing the majority of the funding for the test dredging.

“We are a full-service conservation organization,” said Ducks Unlimited biologist Brian Glenzinski. “A lot of people think we’re duck hunters, but our mission is wetland conservation. We’re kind of a one-stop shop for wetland conservation. With the pristine nature of that lake, it seemed like a worthy cause and ranked out in our priority system. We are based heavily on science and have a couple of criteria to make sure we’re doing work in the right area, and this one hit all the marks.”

Glenzinski described the Dunes Lake project as an experiment.

“Wetland restoration is a relatively new science, so we’re in this constant implement-monitor-feedback loop,” he said. “This is kind of a different project for us. We don’t do many dredging projects like this. We do more big flowage projects or wetland restoration projects, so this one’s a little different for us, but it’s certainly a worthy cause. The fact remains that there aren’t too many pristine naturally connected lakes connected to Lake Michigan out there, so it’s important work we’re doing.”

With the pilot project wrapped up and a Coastal Management Grant recently awarded to the county for the creation of a 10-car gravel parking lot on the old Sevastopol town dump site off Haberli Road to allow easier access to Geisel Creek, Coulthurst said the next step in the process is to put pencil to paper and apply for grants to restore the rest of Dunes Lake.

“By doing the pilot dredge and having the parking area, we’ll be better prepared for the next federal grant program,” Coulthurst said. “We’re doing these baby steps so we can get the full restoration done.”