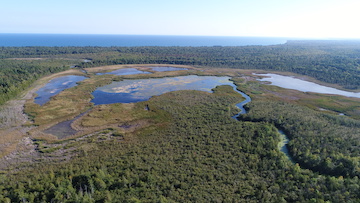 Dunes Lake, as seen from above. Submitted.

Some of the participants in Celebrate Water Door County’s Water Summit, to be held June 4–6, will take a kayak trip into the little-known Dunes Lake: the largest inland lake in Door County that’s directly connected to Lake Michigan.

They will travel to the Town of Sevastopol, parking just off Haberli Road, and then launch their kayaks in Geisel Creek. Paddling down the creek, they might see kingfishers, ospreys and pelicans, among many other birds, in the trees and bushes along the banks. In the water there could be amphibians, bullhead and sunfish — and maybe they will be lucky enough to see the family of otters that some have reported seeing on the creek. Pressing on through the slow-moving creek, they will see rows of cattails as they approach the entrance to Dunes Lake, which is known scientifically as a “unique, shallow-water, marl-substrate coastal wetland.”

Although that might not mean much to most people, it means a lot to Ducks Unlimited (DU), which has taken on the coordinating role in the partnership to restore Dunes Lake.

“The shallow, lake-emergent marsh is a high priority for us,” said Brian Glenzinski, a biologist with Wisconsin Ducks Unlimited. “Then we dive down a little deeper into our local planning guides. Dunes Lake checks all the boxes when it comes to where we should be doing work for the habitat types we’re protecting. That is a special place worthy of conservation for a whole variety of things.”

As the world leader in wetland and waterfowl conservation, DU is a natural to lead the charge to rescue Dunes Lake from an accumulation of muck and encroachment by invasive species such as the narrow-leaved cattail.

In 2016, a pilot project was undertaken to hydraulically dredge a two-acre portion of the 20-acre lake. The goal was to dredge at least 5,000 cubic yards of contaminated soil from the bottom, but the dredge company — PCI Dredging — was able to remove 8,000 cubic yards.

Although much of Dunes Lakes is only inches of water atop the muck, the dredged portion of the lake is now at least four feet deep.

“Water-quality improvement to the two-acre test dredge has been significant,” Glenzinski said. “For all those reasons, we’re moving forward into this next phase.”

Greg Coulthurst, a county conservationist with the Door County Soil and Water Department — another partner in the restoration project — said those invasive narrow-leaved cattails are actually serving a purpose now and through future dredging phases.

“A ring of narrow-leaved cattails has encircled the inner basin and is trapping plants and nutrients,” he said. “It’s very invasive when it comes to high-nutrient systems. It’s working as an ideal filter right now when we do the dredging, so that part’s nice. We’ve been treating cattails on the outer edge of the system, but not touching the inner ring. We’ll treat those cattails when the dredging is done and hopefully get our native bulrushes and sedges back.”

Coulthurst said it will take $1.2 million to dredge the remaining 18 acres of the mucky-bottomed lake.

“We’re at about $450,000 for the next phase. We’ve got enough to do almost six acres,” he said. “Another proposal Brian [Glenzinski] is leading for $700,000 from Sustain Our Great Lakes. If we get that one, we’ll be darned close, at least for the hydraulic dredging.

“There’s some other invasive work we want to do, and we want to do some connectivity, too. If needed, we’re going to cut a channel so the pike and suckers can migrate a little more freely. We still have pike spawning in the north, in Valmy. I still see the young of the year in there occasionally, but when the water levels start to drop in the summer, they might get trapped in there.”

Regarding the large grant from Sustain Our Great Lakes, Glenzinski said Ducks Unlimited was invited to submit a pre-proposal.

“We submitted that, and we just got invited to submit a full proposal, which is a good sign,” he said. “That would be a big chunk to complete the entire project in this next phase. Even if we don’t get that, we still have significant funding to do a phase two.”

Coulthurst said if everything aligns with permitting and funding, the second round of dredging could begin in the fall.

“It’s a great example of a project that can inspire folks to take action,” Glenzinski said.

Donations will be accepted to help with the post-dredging invasive-species control and channel-cutting projects.

“That would be awesome,” Coulthurst said. “We are still making sure we can fine-tune this. There are other parts that will need to be paid for, and who knows how the [dredging] bids will come in.”

For more information, contact Coulthurst at the county Soil and Water office, 920.746.2216.

• All cropland within the Dunes Lake watershed has current nutrient-management plans.

• Pond discharge to a dry streambed that threatened the local drinking-water aquifer has been discontinued.

• The county coordinated efforts to educate landowners about how to reduce phosphorus use in the watershed.

• Sevastopol School coordinated efforts to educate students and families about how to reduce phosphorus use in the watershed and eliminate soaps and detergents containing high phosphorus levels from the school.

• All private, onsite waste treatment system inspections in the watershed were completed in 2015.

• A feasibility study for a third sanitary-district treatment cell has been completed.

• A public parking lot for access into Dunes Lake was constructed in July 2017.