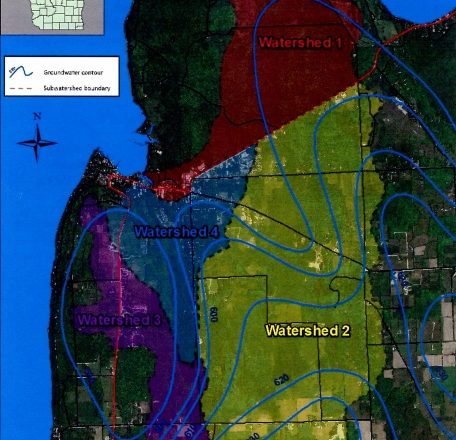 At the opening of a special Gibraltar Plan Commission meeting on April 10 to discuss the Fish Creek watershed, one thing was clear: the creek just isn’t what it used to be.

Residents recalled decades ago when the creek was teeming with spawning fish and a strong current while others expressed disappointment that few people even knew about the creek that named the town.

“It’s our namesake and it seems a lot of people have never even experienced the creek,” said Bob MacDonald, Plan Commission member.

“The creek, that’s what the whole village is named after and it certainly doesn’t have any fish in it now,” said Dave Lea.

Professor Nancy Turyk from the Center for Watershed Science and Education at UW-Stevens Point performed the first analysis on Fish Creek in March of this year. Her analysis provided a model for the expected flow levels of the creek and its water quality.

“Many of the citizen groups that I’ve worked with assume that I’m going to write a plan and present it to them and that isn’t the way we roll,” said Turyk. “In a river plan or watershed plan we merge science and community opinions and rules and regulations.”

In this first of two meetings, Turyk was most interested in getting the perspective from locals and those involved with the Fish Creek watershed project.

There was a unanimous agreement that water quality in the creek has greatly improved and there is volunteer data to back it up.

The Town of Gibraltar has been doing water test sampling for nearly 18 years. A group of volunteers collected test samples at either 30-day intervals or after a rain event.

“Our water quality has gotten better and that’s improved quite a bit and we thought some of that might be due to the sanitary district extending down Spring Road and cleaning up the watershed,” said Steve Sohns, town board member.

The Fish Creek watershed encompasses a majority of Peninsula State Park all the way down to Juddville Road. Water from rain events or snowmelt meanders its way through this watershed and into the creek before dumping in the creek. The size of this watershed means the development that has taken place over the past few decades has interfered with the natural flow of the creek. The low water flow has prevented fish from spawning in the creek like they used to.

“Until you bring the water up, I think you have a history of fish populations that are just absent,” said Greg Coulthurst, conservationist with the Door County Soil and Water Conservation Department.

Most memories of the creek and goals to restore it focused on the fish.

“I spent many springs down at the creek literally picking suckers right out by hand and then throwing them back in,” said Barb McKesson, town board member and Gibraltar native. “I would like to see the creek return closer to that.”

Increasing the water flow in the creek was focused on a mysterious dam built sometime in the 1960s on private land. The dam, which locals say did have approval from the Department of Natural Resources, sits about one mile upstream from the bay near condominiums at Half Mile Bridge. It helped fill in a small pond that was likely there before the dam went in but it included a culvert with a valve to allow for flow.

“There used to be a lot of northern pike that used to go up the creek but I think that all stopped once the dam was built,” said Bill Weddig, president of the Fish Creek Sanitary District. “That culvert bypass, which I think was meant to keep the water table in the valley more consistent, stopped functioning and I think a lot changed at that point. I think the dam caused it.”

The true purpose of the dam and documentation of its construction or inspection is a mystery. Some said the dam was approved as a waterfowl refuge while others say the landowner just wanted a bigger pond in his backyard.

Weddig said a culvert bypass that allowed a manual adjustment of water flow got filled up with debris and has since been forgotten.

“That dam really needs to be looked at because I’ve dealt with a lot of stormwater flooding concerns,” said Coulthurst. “If that dam was removed or operating properly maybe we wouldn’t have those issues.”

Turyk said dealing with private land can be tricky because the landowner typically has to pay for anything done on their land.

The culvert beneath the highway is another place to look at for increasing the likelihood of fish, but any plans could be at the whim of federal funding with a bleak outlook.

Matt Scheave does environmental analysis with the DNR in coordination with the Department of Transportation (DOT) during road projects.

“As we’re looking at all the structures I try to identify barriers to aquatic passage when they’re crossing over,” said Scheave. “When they’re redoing the highway is a great time to go through and fix those.”

He proposed replacing the culvert beneath the highway with something to make it easier for fish to get upstream to spawn. The DOT told him if he can find the money, they can do it.

Scheave submitted a grant to the federal Great Lakes Restoration Initiative (GLRI), which provides funds to improve Great Lakes watersheds. Scheave said the culvert in question is high on the Environmental Protection Agency’s list to be improved, making the grant proposal strong.

But the GLRI is one of the major budget cuts proposed under the Trump Administration. Although the measure would still have to go through Congress, it could completely dry up. Scheave said they will probably know by the end of the summer.

The Gibraltar Plan Commission will hold another meeting on the same topic on Thursday, May 11, at 1pm in the Gibraltar Old Town Hall.