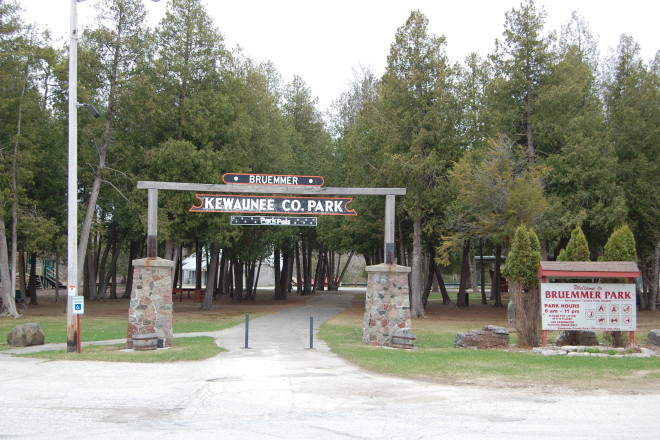 When Pa Bear died at the Bruemmer Park Zoo in Kewaunee in 2011, it was the end of an era. 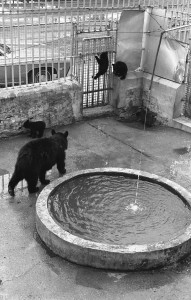 The zoo, on an eight-acre site within the 30-acre Bruemmer County Park, got its first pair of bears in 1938, and they had a cub in 1940. Pa outlived his mate – named, of course, Ma Bear – and lived on to age 25 or 26. Not only was that the end of the zoo’s most popular attraction, it was almost the end of the zoo. Faced with the need for repairs to the facility and a shortage of funds for its upkeep, Kewaunee County, which owns the park, considered closing the zoo.

In 2011, a group of local residents – including those who remember the zoo’s glory days when it and they were young and those who want it restored for the enjoyment of future generations – formed the Zoological Society of Kewaunee County. Their goal is to provide an educational opportunity to all visitors to the zoo, stressing an understanding of and respect for all living things and seeking to enhance and promote a dignified and aesthetically pleasing environment for all the animals. Sarah Nunn is president of the organization, which has about 50 members.

The zoo has a rich history. It began in 1936 with some ring-necked pheasants. Along with the bear dynasty, there were porcupines, monkeys and deer. Herb Mikels of Sturgeon Bay remembers taking his children to the zoo a number of times years ago. “It was such a nice place,” he says, “there were lots of animals, it was always so clean and there were places to picnic.” 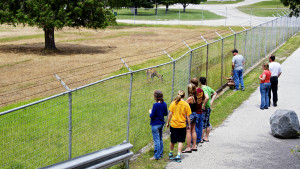 The monkeys and deer in that long-ago zoo came to a sad end. Bill Behrens, who has lived in Kewaunee off and on since 1969, volunteered at the zoo for four years after retirement and is currently a member of the Zoological Society. He remembers that someone let the monkeys out of their cage one winter night and they froze to death. On another occasion, the deer were shot.

Current residents of the zoo include arctic foxes named Buddy and Jewel, bobcats named Bella and Baxter, raccoons, red golden pheasants, a sheep and a goat, white-tailed deer, ducks, a goose and lots of beautiful (and very outspoken) peacocks. Most of them were donated, and all must come from a licensed dealer, through the U.S. Department of Agriculture. Each has access to constantly running water. County employees feed the animals and clean their cages daily, and two veterinarians are on retainer. 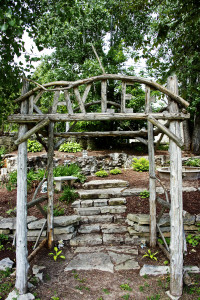 Dave Myers, the new director of the Kewaunee Promotions and Recreations Director, who oversees the zoo, appreciates the Zoological Society’s cooperation with the county to raise funds to attempt to bring the facility back to its “glory days.” Already there have been changes – landscaping, new fencing and signage, butterfly houses and animal feeders. “We’re looking into turning a long dormant pen into a new and larger pheasant exhibit by adding some Lady Amherst pheasants to the present pheasant family,” Myers said.

In the past year, the society spent about $45,000 for new fencing for the goat and sheep pen, expanding it to include space above the pen that the animals can access via new wooden bridges. There’s also new fencing for the Arctic Fox exhibit. The society’s focus during the next few years is to continue to redo fencing and to create new, larger homes for the animals. The Kewaunee County

The society and the park staff are hoping to raise awareness that it’s a great place for families. There are picnic facilities, shelters to rent, and fishing in the Kewaunee River that meanders through the area. “Movies with the Animals” were held on three Saturday nights in June, July and August. 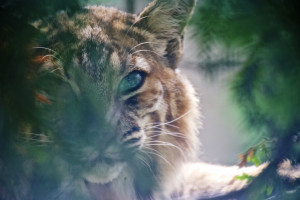 The Zoological Society carried out a variety of activities during the summer to raise money for the improvement projects. There were benefit walks, raffles, auctions, booths at sidewalk sales and other events from Sturgeon Bay to Green Bay, culminating in the fifth annual Zoobilee on August 29.

On February 28, 2016 there will be a repeat of the successful ZoupArt at the Kewaunee County Fairgrounds – an event that combines the results of a soup competition served in ceramic bowls made by Kewaunee students with a display of student artwork from around the county.

Is another bear – or maybe two – in the Bruemmer Park Zoo’s future? The Zoological Society would love to see that happen, but new quarters would need to be provided. The zoo was created from an old quarry, and the bear’s den was dug back into the side of a rocky cliff. Pa Bear and his family lived on concrete. A new bear would need a more comfortable surface.

Bruemmer County Park is located at East 4289 County Road F, at the intersection of Roads F and C, about two miles northwest of the city of Kewaunee. It is open year round from 7:00 am to sunset, and admission is free. For more information, call (920) 388-0444. 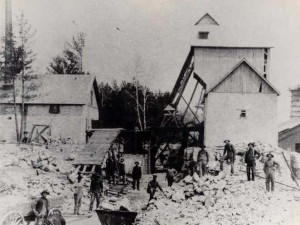 The history of Bruemmer Park Zoo begins with the dolomitic limestone of the Niagara Escarpment.

Long before the park existed, men extracted limestone from that same land. In the last half of the 1800s, as the country was growing, there was demand for limestone for building stones and for use as an aggregate in concrete and asphalt for roads.

About a mile west of Kewaunee is an area known as Footbridge. This was the home of the Seth Moore quarry and lime kiln, which he began some time in the 1850s. Seth’s son, Ransom, also worked the quarry and lime kilns as a youth, but later went on to become a key player in the University of Wisconsin – Madison’s College of Agriculture and is considered the father of the 4-H movement.

In a 1928 essay he wrote for the national dairy industry magazine Hoard’s Dairyman, Ransom Moore wrote about his father’s quarry operation: “We lived where the Niagara limestone jutted out and engaged in burning lime and quarrying. The stone from Moore’s quarry built the first stone bridges across the Kewaunee River, besides hundreds of stone basements under farm and other buildings…Nearly all of the lime used in the city of Kewaunee was taken from the kilns operated by my father and myself.”

After being injured when a large rock fell on his back, Ransom Moore studied to successfully earn a teaching certificate, and after eight years of teaching in Kewaunee-area schools, he was encouraged by his fellow educators to run for district supervisor. He eventually went on to a successful career as a UW ag professor and chair of the Agronomy Department.

In 1893, the limestone quarry was taken over by the Nast Bros., a company formed in Marblehead, Wisconsin, in 1872. The Nasts operated the quarry until 1916, and when Nast Bros. was purchased in 1921 by Western Lime and Cement, they reopened the quarry for a short time before closing it for good.