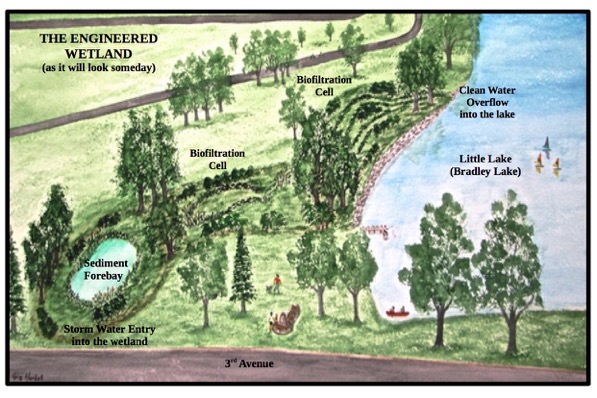 In the mid-19th century, Sturgeon Bay’s Little Lake (also known as Bradley Lake) was known as Crystal Lake, a tribute to the clear, spring-fed water within it. Its shores, which extended from Alabama Street to Georgia Street, were home to pine trees and its water flourished with a variety of fish.

When the area was discovered in 1852 by loggers from New York, it would mark the beginning of Sturgeon Bay’s logging and lumber industry and the end of the lake’s pristine days. During the following decades, it would become the dumping ground for a sawmill built on its west end, and its two attached lakes, one each on the north and southeast ends, would be filled in with sawdust and other sawmill refuse. A much smaller and heavily polluted Crystal Lake would become Bradley Lake, named after the Bradley Mill on the lake’s west end, and eventually Little Lake.

Over the course of the next century-and-a-half, the lake would undergo significant changes, including shifting water levels, continued filling from lumberyards and the mill, and in 1929, purchase by the city. By that time, it had become a bog that contaminated a nearby beach and groundwater. It would also see a number of failed attempts at revitalization, including through the Civil Works Administration and Works Progress Administration (the Great Depression-era work programs) and the Wisconsin Conservation Commission.

Now, 165 years later, work on an ambitious three-phase restoration project of the 20-acre Little Lake is underway thanks to a partnership between the Rotary Club of Sturgeon Bay, City of Sturgeon Bay and the Door County Community Foundation.

According to a 2008 report by Miller Engineers & Scientists, a majority of the lake’s issues stem from its location as the endpoint for street runoff from a 260-acre watershed. As a result, it has high levels of nitrogen and phosphorus, which have depleted its oxygen levels, preventing desirable fish from surviving through winters. Its nutrient-rich quality has also resulted in excessive algae growth and invasive vegetation.

The first plan of action is to remove the phosphorus that’s been building up for a number of years through construction of an engineered wetland south of Little Lake in Sunset Park. The stormwater runoff from the watershed will be diverted into the engineered wetland, which will act similar to a septic system, as explained by Greg Meissner, co-chair of the Rotary’s Environmental Protection Committee and owner of Meissner Landscape, Inc.

“An engineered wetland is sort of like a septic system,” Meissner said. “The water goes through a couple settling points where most of the material, any suspended material settles out and then it goes into a third cell much like your septic tank would. The first one takes out most of the solids, the second takes out a bit more and then the third area would be the drain field; it pumps it out into a drain field and then it seeps through the soil and cleanses the water even more. An engineered wetland is sort of like a surface model of that.”

Last summer, the city’s Finance Committee approved a $292,000 bid from Rass Excavating and Materials to begin phase one of the project, construction of the engineered wetland. The Rotary Club has raised $100,000 for the first phase and in 2014, the city received $100,000 from the Fund for Lake Michigan to support the project.

“Once they start a project like they have with us and Little Lake, they will continue to fund it until its completion,” said Roger Anderson, co-chair of the Rotary’s Environmental Protection Committee.

This summer, the Rotary Club has planted eight different types of shrubs and trees and 13 varieties of native emergent plants around the three cells of the wetland that will naturally filter the water before it enters Little Lake. Planting by two of the three tiers of the wetland is expected to be finished by the winter.

Phase two of the project is dredging of the lake, which could cost anywhere between $1.5 and $3 million. Bob Bordeau, city parks and recreation director, said they will begin writing grants in 2017 for phase two but dredging of the lake is likely two years away.

The third phase will begin with public input to determine what public amenities to include once the project is completed.

“We have to have a plan for the entire park which will encompass Little Lake because it’s such a part of Sunset Park that any plan we had for the park would be almost obsolete once we redid the lake because it would be really such a large part of the park,” said Mayor Thad Birmingham. “We have to figure that out.”

Volunteers are needed on Saturday, July 16 to plant approximately 1,000 emergent plant plugs in the middle cell of the engineered wetland. Work will begin at 8 am. Those interested should meet at the Sunset Park parking lot at the end of Delaware Street and bring boots and a trowel.