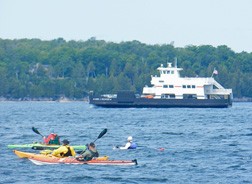 When the starting horn went off at 8:30 am on June 16 at Gislason Beach, Detroit Harbor, spectators saw Mark Anich, an elite marathon kayak racer from Racine, take a quick and speedy lead. Heading 3/4 mile to the east of Hog Island as prescribed by Fish and Wildlife regulations, Anich outpaced all competitors.

Simon Longdill, a 35-year-old New Zealander, began to gain on Anich in the middle of the course. Longdill’s extra weight helped him to head into the wind with a boat that gained momentum and inertia as the wind kept beating on his bow.

“Simon had a heck of a stroke with awesome rpms,” said John Abrahams, professional paddler from Duluth who won the marathon race in 2010.

Longdill took the lead and never gave it back as he raced south on the west shore of the 35-square-mile Washington Island. Longdill won the race and set a course record of 3:16:20, beating the previous course record set by Erik Borgnes 3:18:24 in 2009. At the finish, Longdill said, “The course was so beautiful. I had a hard time concentrating on pacing myself and had to catch myself for not just looking at the scenery.”

To accommodate paddlers who are not experienced enough for the full marathon, event organizers offered a half marathon that began at Gislason Beach and extended to Jackson Harbor. John Rauchle set the half marathon record with a time of 1:25:40.