Mention paper boy to most people, especially those who grew up in a small town a few generations ago, and the picture in their minds is likely to be a Norman Rockwell-type scene – a red-haired youngster on his bike, aiming for front porches at top speed so he can make it to baseball practice on time.

Door County has a different type of “paper boy,” employed by the Peninsula Pulse to deliver the newspaper. The Paper Boy business was established in 2002, and Jim Karwowski of Sturgeon Bay was one of the early employees. He began in 2004 when a friend, Gerry Page, retired and suggested he apply for the job. 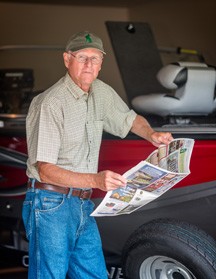 Jim, a research scientist with Abbott Laboratories for 30 years, retired and moved to Door County from Mundelein, Ill., in 2002. He and his wife, Anita, lived in Windemere Townhomes for six years, and serving as president of the condo association kept Jim busy at first. But by the time the Paper Boy position became a possibility, he was ready for a pleasant, low-key job one day a week. He was one of five drivers who deliver the Pulse, while a sixth distributes brochures, advertising flyers and other materials for other local businesses. All report to Angela Sherman, Paper Boy’s distribution manager.

“When I started, I delivered 2,700 papers,” he says. “They wouldn’t all fit into my SUV, even when it was packed to the roof. I had to do part of the route, then go back for the rest of the load. I delivered to 150 locations weekly from May through October, then every other week in the winter. It took about eight hours. Recently, I had just 140 drops in the core of Sturgeon Bay.”

Jim says that driving around and dropping off papers was pleasant and relaxing. Finding parking places in downtown Sturgeon Bay? Sometimes not so pleasant.

He also enjoyed the social aspect of seeing people in 140 businesses on a regular basis. “When I came home, Anita would often say, ‘Did you talk to so and so today? How are they doing?’”

Jim drove his route for the last time on Aug. 14, retiring for the second time. Will he miss it?

“The people at the Pulse are a good group to work with,” he says. “I’ll miss that aspect of the job, but not driving in the ice and snow in the winter or getting in and out of the SUV dozens of time in the summer heat.”

Other than owner David Eliot and owner/editor in chief Madeline Harrison, Jim was believed to have the most seniority of any Pulse/Paper Boy employee. “He did a lot of wonderful work for us,” Sherman says. “We’ve been so happy to have him, and certainly wish him a great retirement.”

“Working on Fridays didn’t interfere too much,” he says, “because there are so many tourists fishing on weekends that it’s the worst time for locals.” Still he expects to be putting in a lot more time in his boat near Sherwood Point and Larson’s Reef.

Jim is secretary of the Sturgeon Bay Lions Club, which he thoroughly enjoys, and also assists with activities of the Altrusa Club that Anita has served as president of for the past year. Recently Jim helped with Altrusa’s annual Back-to-School Fair that provided supplies to nearly 550 Sturgeon Bay youngsters on the school district’s free lunch program.

For several of the years Jim was delivering the Pulse, the Karwowskis’ son, Chris, also was involved in the newspaper business as a senor writer for The Onion, the satirical publication that caused an international stir in 2002 when it printed a story suggesting that the U.S. Congress had threated to move out of Washington to Memphis or Charlotte, North Carolina, unless a fancy new capitol with more bathrooms and better parking was erected.

The Chinese government suffered embarrassment when the state-run media, the Beijing Evening News, reprinted the story as factual. Chris told Jim that the Chinese retorted, “You Americans joke about everything!” Not politically correct, of course, in Communist China.

As Jim gives up his second career, Chris is now a freelance writer in Los Angeles, generally working in comedy, although he wrote several episodes of the PBS children’s program, Word Girl, for which the group of writers won an Emmy.