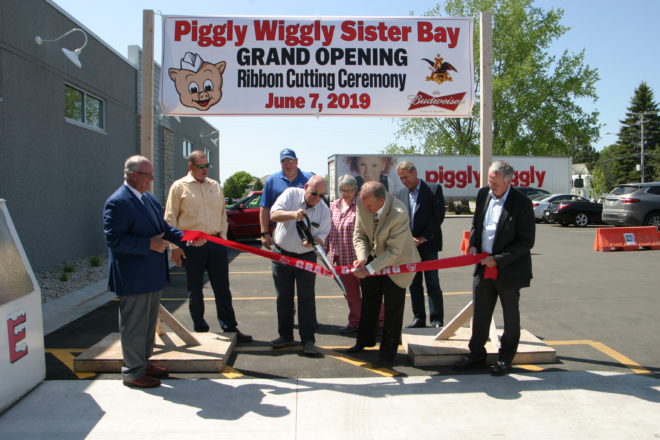 Sister Bay Village President Dave Leinau had to take several stabs at cutting the Piggly Wiggly grand-opening ribbon with a pair of dull giant scissors, but when he finally succeeded, it was to great jubilation. Also pictured are Tom and Daniel Nesbitt holding the ends of the ribbon and, from left, Eric Neumann, vice president and project executive with the design-build firm MSI General; Sister Bay Piggly Wiggly Manager Jay Kita (in cap); Lynn Church, past president of the Country Walk Owners Association; Gary Suokko, CEO of Piggly Wiggly Midwest; and Keith Batterman, manager of engineering and maintenance for Piggly Wiggly Midwest. Photo by Jim Lundstrom.

What a contrast there was between the June 7 ribbon cutting for the remodeled Sister Bay Piggly Wiggly and the Oct. 29, 2018, groundbreaking for the project.

Although much enthusiasm was expressed at the groundbreaking seven months ago, it was dampened by a bitterly cold wind. Several speakers at the ribbon cutting mentioned that bleak weather as the sun shone on the current proceedings, and as warm as that sun was, warmer still were the feelings shared by the speakers about the close friendships that were established during the arduous process of the store’s 21st-century update.

Piggly Wiggly co-owner Tom Nesbitt kicked off the lovefest by naming the Country Walk Owners Association, and particularly members Charlie Henriksen, Gary Dooley and Lynn Church; the store’s staff and customers; staff at Piggly Wiggly Midwest; and MSI, the design-build company, and, in particular, project superintendent Zach Zeuske, who, Nesbitt said, was liked by everyone involved in the project. “Our employees absolutely fell in love with this man.”

Co-owner Daniel Nesbitt reiterated much of that praise but added Nicolet Bank’s senior vice president of commercial banking Jamie Alberts and the bank itself. He also thanked his wife, Jane; and Tom’s wife, Gloria, for putting up with them during the trying time.

Lynn Church, past president of the Country Walk Owners Association, said, “I’ve always understood Piggly Wiggly as central to this community, not just in providing food, but for serving as a community center for many,” adding that she sees more of her friends at the store than at her dinner table. “This is a place that provides a steadfast presence in a community that is rapidly changing and yet staying constant,” she said.