It was a spectacular lighthouse when it was completed in 1868 at a cost of $12,000 – Milwaukee cream city brick construction, a unique design (a square tower, set at an angle) that distinguished it from others of its kind, and a prime Door County location on the water. Over the next 58 years, it sheltered three families who cared for it with love and respect, but progress caused the last family to leave in 1926. 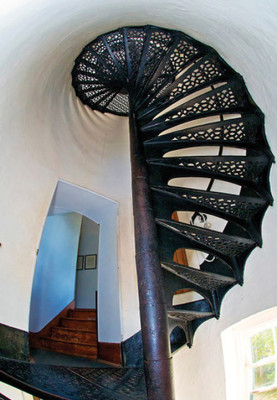 For the next 34 years, the house mostly stood empty. Occasionally, a few people might drop by, but it was no longer a home, and it experienced the ravages of cold weather and dampness. In 1960 the house was leased by the Door County Historical Society (DCHS). For three years, the organization’s volunteers labored to remove 80 coats of paint, transitioning Eagle Bluff Lighthouse to a new life as a living history site.

Now the lighthouse that has watched over the Strawberry Channel of Green Bay for 144 years needs a major facelift and – just as important – authentication of the hundreds of historical artifacts that fill the house.

Those tasks have been tackled with enthusiasm by Patti Podgers, curator/manager of the lighthouse since 2010, with support from Peninsula State Park administrators Kelli Bruns and Erin Brown, Wisconsin Department of Natural Resources (DNR) archeologist Mark Dudzik, the DCHS president George Evenson and the society’s board.

If only it were as easy as picking up a gallon of paint from Nelson’s! To begin with, Eagle Bluff has many “bosses.” A federal property when it was built, the tower and light are still overseen by the U.S. Coast Guard, which conducts annual inspections.

Since Eagle Bluff is located in Peninsula State Park and owned by the DNR, the state must approve any changes to the facility. Because it’s on both the national and state registers of historic places, there is also careful oversight by a DCHS committee to make sure that the building and its contents are true to the period of restoration, the heyday of small ships on the Great Lakes.

“A long-time goal of the DCHS was to see this done,” Evenson says. “In 2010 we hired Alan Pape, a noted historical architect, to put together a plan for the continuing restoration of Eagle Bluff to the period from 1883 to 1918, the 35 years the Duclons – William and Julia and their seven sons – were in residence. The work is funded with admission fees from lighthouse tours. Moving forward, we hope for state funding.” 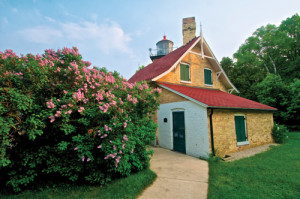 In 2011, restoration work included painting the lamp house, the top of the tower, the black wrought iron railing outside, the deck, cap and roof. Improvements to the living quarters included refinishing the floor of the Duclons’ winter kitchen, now used as a welcome and orientation area for tours, and replastering and painting worn areas in the dining room and main hallway. The work was completed by local craftsmen Steve Reed, Bob Ryan, and Travis Price and was paid for by the historical society.

Dudzik is the DNR’s point man in regard to physical improvements. “The Wisconsin DNR is the state’s single largest owner of cultural resources such as the lighthouse,” Dudzik says. “These resources are important since they clearly demonstrate our cultural ties, our physical ties, to the landscape, the natural environment. The human (cultural) and natural environments are inextricably linked…The story of such places adds another element of texture to the story of human settlement in Wisconsin.”

Podgers was delighted to hear from Bruns that Wisconsin has some funds available for historic projects in state parks. Bruns says that the DNR staff and the Eagle Bluff Lighthouse Committee are partners who are working collaboratively to continue to preserve and protect the Eagle Bluff Lighthouse and its historic and interpretive significance at Peninsula State Park.

Podgers is applying for funds this year to remove white paint on the exterior of the house around the entry door. If that sounds like a simple task, think again. While the cream city brick is beautiful, it’s also very fragile – even to the point of rubbing off to the touch. Taking the paint off without harming the brick must be a delicate, carefully-researched process. There are also some holes in the brick that need to be repaired. 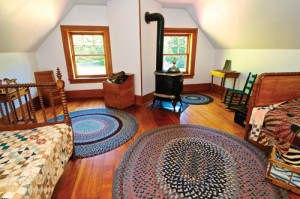 Inside the lighthouse, wallpaper in two bedrooms, dating from the 1960s renovation, is literally falling off the walls and needs to be removed. Plaster will be repaired and the walls repainted white. (In the early days, the federal government provided powdered mix-your-own paint each year for the inside of the house and outside trim. White, gray and green were standard colors.)

Other work on the property – repairing the stone retaining wall that overlooks the bay and fixing a drainage problem on the sidewalk – is being taken care of by the DNR as part of the state’s responsibility for the grounds.

Even with three levels of oversight that must approve physical improvements to Eagle Bluff Lighthouse, this process is easy compared to the second task undertaken by Podgers – establishing where each item in the lighthouse came from, when it was acquired and, the tricky part, determining if it dates to the period when the Duclons lived there.

“I inventoried every item in the house, from the piano to the potato masher,” Podgers says. “Then we hired Geri Wegner, owner of Boathouse Antiques on Highway 57, to assess the authenticity, age and value of each artifact.” The problem is two-fold – who owns each item and is it appropriate to be included here? The fifth order Fresnel lens and William Duclon’s log book belong to the U.S. Government. A number of items, like the crazy quilt made by Julia Duclon, were donated or lent to the DCHS by the family. 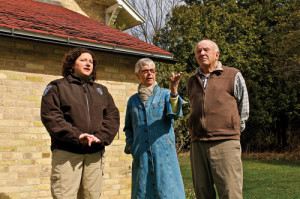 Bruns is credited with being really helpful in sorting out ownership of many of the artifacts, and Podgers has resources for establishing the provenance of a few other pieces. When she arrived in 2010, she found faded paper tags taped to shelves below some items. A little book by Frances Badtke, one of the DCHS volunteers who helped with the 1960 to 1963 restoration, has pictures of several items and notes on where they came from. Steven Karges’ 2000 book, Keepers of the Lights:  Lighthouse Keepers and Their Families, Door County, Wisconsin, 1837-1939, has also been helpful. But the history of many things – and why they’re in the lighthouse – remains a mystery.

For example, there are questions about a porcelain washbowl, pitcher and chamber pot decorated with gold seagulls. “It’s a lovely set,” Podgers says, “but could the Duclons have afforded something so elegant? Not likely.”

At any rate, the docents’ tours this year will be more historically accurate. For example, “family lore” claims that a stairway with 100 steps led from the lighthouse to the water. An elderly visitor some years ago even provided a photo of herself as a child sitting on those steps. Legend had it that everything the keeper’s family owned, even their piano, was carried up those steps. An engineer who looked at the site recently said he didn’t see how that many steps could have been fitted against the angle of the bluff and that, however many steps there were, it was unlikely that a piano could have been hauled up them. Still, two of the Duclons’ great-granddaughters are sure that the 100-step story is absolutely true. That’s what keeps history interesting – and challenging. 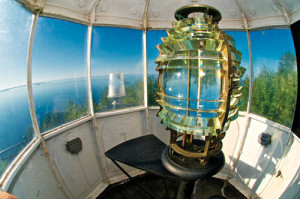 One of the most intriguing stops on the tour, besides the light, is the second-floor bedroom where the Duclons’ seven sons slept. (Six of them brought brides back to live in the lighthouse. Where, one wonders, did they find room in a three-bedroom house, with the smallest room, according to family legend, reserved for the annual visit of the federal lighthouse inspector!)

Immersed in maintaining the physical property and establishing historical accuracy, Podgers says it is her hope that the lighthouse will still be welcoming visitors 100 years from now. She recounts the story of Jack, an eight-year-old camper who was so enchanted with his tour last year that he returned the next day with his entire family. “He’ll be back someday with his children and grandchildren,” Podgers says.