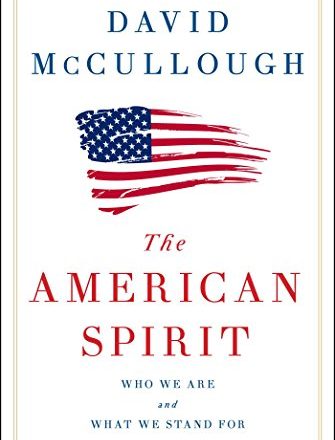 David McCullough’s new book The American Spirit will come as welcome relief to people who are so beaten down by the constant reports of bad or bizarre news that they are in no mood to give thanks or be merry during the forthcoming holidays. The American Spirit is small enough to fit into a Christmas stocking, with only 171 pages of print and illustrations, but it contains more real substance than many an 800-page tome.

David McCullough (1933-present) is a distinguished historian who has written highly readable biographies of Theodore Roosevelt, Harry Truman, John Adams, and the Wright Brothers. He has also received (at last count) two Pulitzer prizes, two National Book Awards, the Presidential Medal of Freedom, and 54 honorary degrees. He has given speeches for 50 years in all 50 states. He even spoke before a joint session of Congress – a rare honor for a private citizen.

McCullough is profoundly enthusiastic about his calling as a historian. He once read a letter by John Adams that was so inspiring “it practically lifted me out of my chair.” Those of us who lack such powers of levitation will nevertheless find much material in The American Spirit that will stir the blood and lift the heart. Consider the case of Charles Sumner, an undistinguished law student who, shortly after his graduation, borrowed some money, turned his back on the law, and sailed for France. He was fascinated and overjoyed by what he found there: the opera, the Louvre, and lectures on every conceivable academic subject. Being in Paris was an education in itself.

But one thing in particular drew Sumner’s attention: the black students were as well respected as everyone else. He pondered. Perhaps, he thought, the difference between blacks and whites “does not exist in the nature of things.” Back in America, Sumner became an outspoken and fearless abolitionist. He was such a controversial figure that one day in 1856, on the Senate floor, an irate congressman from South Carolina approached him from behind, tried to beat him to death with a heavy cane, and very nearly succeeded.

Like Sumner, John Adams and members of his family also spent time in France. John Adams’ first trip, a diplomatic mission, took place in the winter during the revolution, under horrible conditions (the luxury liner had not yet been invented). But both John and Abigail insisted that young John Quincy accompany his father because they wanted him to learn French, to encounter the great French scholars and thinkers, and to meet Benjamin Franklin. Later the father and son made a second trip; then Abigail came to join her husband, and John Quincy returned to America to prepare for Harvard. At home in Massachusetts, John Quincy quickly developed a reputation as an accomplished, impressive, French-speaking snob. Abigail wrote to her son, reminding him that he had had opportunities and adventures that few of his peers could even imagine, let alone dream of. “How unpardonable would it have been in you,” she wrote, “to have turned out a blockhead.” Apparently the young man took her words to heart, and he grew to be a model statesman.

At first Abigail cringed at the dirt and frivolities of Paris, but then she discovered the opera and the theater: she also noticed that in polite social circles, women were treated as the intellectual equals of men. When the time came to return home, she could hardly bear to leave Paris.

McCullough naturally admires learning, but he wonders whether modern Americans are too impressed with what we call “information.” “Facts alone are never enough,” he writes. “If information were learning, you could memorize the World Almanac and call yourself educated. If you memorized the World Almanac, you wouldn’t be educated. You’d be weird!” True learning, he says, requires judgment “and work, concentrated work.”

Readers of this little book will encounter many well-educated men: brilliant Thomas Jefferson, the energetic Roosevelts, feisty John Quincy Adams, eloquent John Kennedy, and also some famous women: Abigail Adams, Margaret Chase Smith, Barbara Jordan, Mary Cassatt. The legacies these people left us can make an American’s heart swell with pride, but what of today’s America, rich in facts (and alternate facts) but poor in judgment? Where are today’s Jeffersons and Roosevelts? Here is David McCullough’s answer:

“Many a time I have gone off on a speaking date feeling a bit down about the state of things and returned with my outlook greatly restored, having seen, again and again, long-standing American values still firmly in place, good people involved in joint efforts to accomplish changes for the better, the American spirit still at work.”