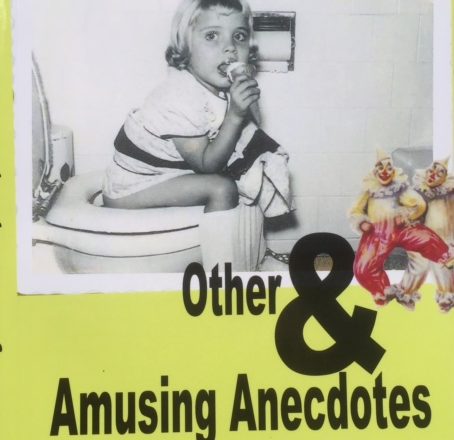 Charlene Berg is a familiar figure in the Gills Rock area. On summer mornings her sleepy customers gather at the Gills Rock Coffee Shop to sample Charlene’s cherry turnovers, cinnamon rolls, and fresh-baked quiche. A businesswoman of considerable ability, Charlene is also the author of a recently published autobiography, My Baking Bloopers & Other Amusing Anecdotes.

For anyone who wonders how families entertained themselves before the internet, what life was like for businesswomen before the dawn of feminism, or how to enter and rob an office building in the dark of night, Baking Bloopers can definitely prove instructive.

Charlene grew up in Rochelle, Illinois, where her father was an electrical contractor and a devoted family man. One of his fatherly duties was to dash home from work occasionally and use a wooden match to burn off the leeches his children collected while playing in the creek. In the summer he made the children a swing out of thick rope and a stuffed burlap bag. In the winter he hitched the children’s toboggan to a truck and pulled them through the snow (the land around Rochelle was too flat for sledding). He also found time for more adult family activities. One dark night Charlene and her brother crept out of the house to investigate a strange noise in the garage. They discovered their parents necking in the front seat of the car.

For Charlene, her father was “the dearest Daddy in the whole world” – her hero. But almost every hero has a flaw (Superman can’t bear the touch of Kryptonite; Harry Potter wears glasses). Once during a lakeside family vacation, dad’s male ego surfaced, and he decided to demonstrate his athletic skill by riding a zip sled – a simplified water ski that looked like a small blue surfboard. Charlene describes it as “VERY buoyant.” Dad pulled himself onto the sled, mom revved up the motorboat and suddenly dad found himself on his belly, whacking up and down on the sled as it bounded across the lake. “The next morning,” Charlene writes, “we had to roll him out of bed and help him stand up. You should have seen the bruises!”

Charlene later graduated from Northern Illinois University with a degree in business administration, but in those days, businesswomen earned little respect. For five years Charlene worked at an advertising agency, gaining more and more responsibilities as time passed. But she was turned down for a promotion because, she was told, “We NEED you here.” The new hire turned out to be a young man just out of college with no experience. He was assigned a corner office with two windows; then the boss told Charlene to train him. The situation deteriorated from there, and finally Charlene inserted a sheet of paper into her typewriter and wrote five words: “I hereby resign, effective immediately.”

Charlene had a friend, Susan, who was a graphic designer. One night a distraught Susan appeared at Charlene’s home with a tale of woe: she too had stormed out of her workplace and tried to slam the door behind her (it had a pneumatic attachment), but she had left all of her equipment at her office. Now she had no way to make a living! Desperate situations call for desperate action. At midnight Charlene and Susan arrived at Susan’s former workplace, dressed in black and carrying canvas bags. A mutual friend let them into the building. “We stuffed everything belonging to Susan into the bags,” Charlene writes, “being careful not to take ANYTHING belonging to the agency – not even a damn pencil.”

They were never caught, and Charlene soon blossomed as the owner of an art gallery that she named Gallery Ten, because she had exactly 10 clients. Then destiny beckoned. At one of Charlene’s gallery receptions, a strange man wandered into the gallery and began inspecting the women’s necklaces. Charlene called the police. An officer soon arrived and gently escorted the stranger out of the building. The offender turned out to be a harmless street person who was clearly out of his comfort zone in an art gallery. The policeman’s name was Dewey, and two years later Charlene married him.

Not surprisingly, Baking Bloopers has several flaws of inexperience. The narrative would be easier to follow if it were organized into chapters instead of presented in a long series of small episodes. Arguably Charlene makes too much use of capital letters and expressions such as “yikes!” and “done and done.” Nevertheless, readers will find it a funny and appealing book – and one that should be preserved in the archives of universities for the use of scholars who specialize in American life during the years immediately following World War II.