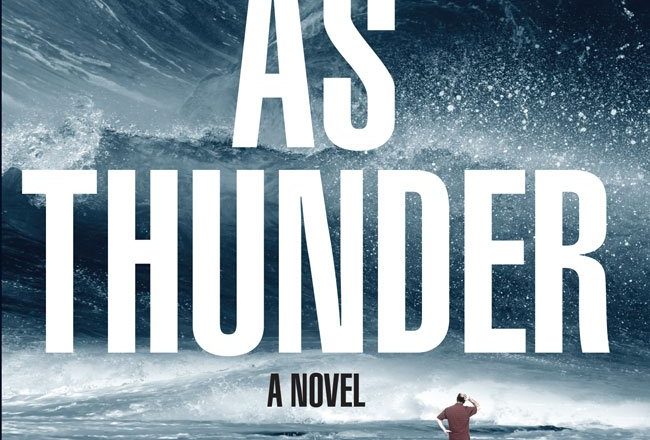 For anyone who is weary of novels and movies about teenagers saving the world, Jerry Apps’ new book Cold as Thunder will come as a refreshing change. It is a dystopian novel in which almost all of the heroes are past the age of sixty, and they belong to a club known as the Crystal River Oldsters. The community of Crystal River is located in Wisconsin, somewhere south of Door County.

The larger setting is an America where both the Republican and Democratic parties have spent their energies and become obsolete. A man by the name of John Emery becomes the leader of the newly formed Eagle Party and begins promising to “take the dreaded government off the backs of hardworking citizens, provide jobs for everyone, and keep citizens safe from threats within and outside the country.” After Emery is elected, the Eagle Party abolishes the Constitution, takes over the internet and withdraws American military forces from all foreign countries.

Having taken control, the Eagles conduct a nationwide book-burning spree called the Great Collection, which is described as “a celebration to cleanse our society of wrongheaded thinking and immoral references.”

In Crystal River it is a sad celebration. A boy struggles to fight back tears when he is ordered to throw a copy of Charlotte’s Web into the fire. A librarian tries to hold off the book-burning officials by standing in the door of the library; she is seized, handcuffed and dragged away screaming, never to be seen again. After the library is destroyed, the empty building turns into the Last Chapter Saloon.

The Eagles sell the public schools to the highest bidders and then establish a national curriculum that is designed to do nothing more than train students for the workforce. Significantly, any teacher who mentions “climate change” is likely to be thrown in jail, because, according to the Eagles’ code, “The environment and its resources are there for your use.”

If the Eagles’ policies are beginning to sound vaguely familiar, Eagle nation has one striking difference from almost all fictional and real-world dictatorships:  it has no strong leader – no Big Brother figure, no Voldemort, no Stalin, no Hitler. After John Emery is elected, he all but disappears, making only an occasional cameo appearance. The country is ruled by the mysterious Office for Social Responsibility (OSR) and all citizens communicate by means of their Solar-Powered Electronic Devices (SPEDs). The various Oldster chapters in the Midwest try to keep American civilization alive by homeschooling their children (using books that they managed to hide during the Great Collection) and by establishing a secret school in Canada where promising students can receive a liberal education.

It appears that nothing can prevail against the OSR – nothing, perhaps, except Mother Nature. The weather has grown strangely violent of late, and one can’t help but notice, even though the words “climate change” are forbidden. One day the meteorologists at the Northeast Wisconsin Weather Company discover that a powerful storm has flooded New York City and is threatening to hit Door County and wreak every conceivable kind of havoc. The local OSR office refuses to broadcast a storm warning because such news would “cause panic in Door County.” Panic occurs soon enough, however, when the killer storm destroys the entire county, turning its pleasant fields and pastures into killing fields. The straggling survivors take refuge in a park near Crystal River, where they build a tent community and try to imagine what a perfect society would be like. The Oldsters hatch a plan to overthrow the Eagle Party; they are aided by a young student who has a genius for electronics and computer technology.

Cold as Thunder contains a number of improbabilities, including the portrayal of a strong government that runs by committee. In fact, there is no evidence that much of anything can be accomplished without a leader (except for the odd chamber symphony or string ensemble that proudly manages without a conductor). It is also hard to believe the survivors of Door County could bounce back as quickly as they do. We are currently witnessing the destruction of an island in Hawaii; we have seen the survivors and they are clearly shattered beyond hope of easy recovery, even with generous assistance and with the help of therapists. To lose a home would be difficult enough; to lose a beloved community would be devastating beyond words.

In spite of its flaws, however, Cold as Thunder might well serve as the inspiration for an exciting film. The necessary elements are here:  a brutal government, thrilling disasters, ordinary people determined to save their world, and a character who could make a special hero – a professional assassin who starts to suspect he has wasted his life.