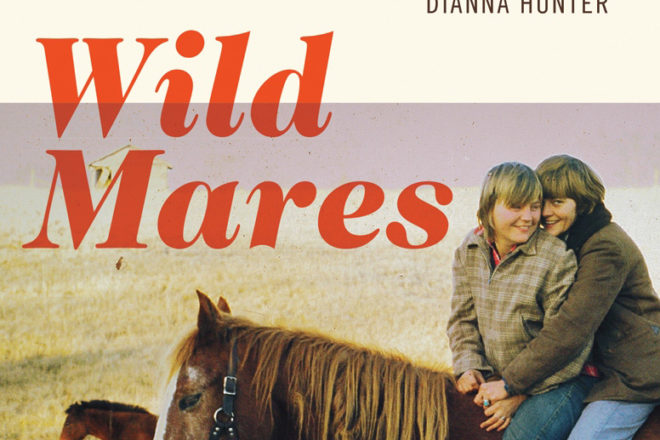 You were going to change the world.

It’s true that you were one small voice – just one person with a vision – but you were sure it could be done. You were going to change the world, one corner at a time – starting with the one you called home. And in Wild Mares: My Lesbian Back-to-the-Land Life by Dianna Hunter, that’s sometimes all it takes.

Growing up in rural South Dakota, Dianna Hunter learned what “queer” was long before she understood her own sexuality. She was “seventeen, cosseted, closeted and clueless” then, but once enrolled in college and living in Minneapolis in an atmosphere of early-1970s feminism and LGBT activism, she “surprised” herself by coming out.

By then, classmates had introduced her to new friends, who introduced her to a lesbian community that raised her consciousness. Hunter learned how to be an activist, and she helped to create safe places for lesbians to socialize. When friends began to think about establishing a collective farm in Minnesota, she was highly intrigued.

“We were headed toward our dream and our vexation,” she writes. “Women’s Land, Open to All Women.”

And it felt like the right “path to freedom.” At the first farm Hunter lived on, women and children shared the work and the bounty. “Voluntary poverty and group living” taught them that they “didn’t need much money to get by,” and they didn’t need men to care for the livestock or outbuildings. Hunter soaked up every bit of information she could, and when it was time to move on, she and her next housemate rode their own horses more than 200 miles to another farm.

Through the years, there were other farms and other horses. Friends and lovers came and went; societal attitudes changed; and, though now retired, Hunter was eventually able to buy and manage a dairy farm near Lake Superior.

“To many onlookers,” she writes, “our lesbian-feminist back-to-the-land dream must have seemed strange and unrealistic, but we were far from the only ones who dreamed it.”

“Utopia” is a word that Hunter uses when recalling the first 15 years after coming out as a lesbian. No word could be more apt because, despite tales of lack and hardship, Wild Mares makes that life sound positively serene.

And yet there’s angst here, starting with a constant stream of people who move in and out of Hunter’s narrative, taking their drama with them and re-inserting it. After a while, that seems like just more of the same, and character fatigue may begin to set in; it doesn’t help that there are several farms involved, adding to the consternation.

Even so, Hunter’s introspection, her eagerness to do anything to find her “utopia,” and her love of the land take over and make this book palatable. In the end, it turns out to be a worthwhile look at nontraditional, 20th-century farming and at Midwestern lesbian history. Yes, Wild Mares is a little relentless in its overly peopled telling, but it’s also something different for a change.

Terri Schlichenmeyer has been reading since she was three years old, and she never goes anywhere without a book. She lives on a hill in Wisconsin with two dogs and 15,000 books.