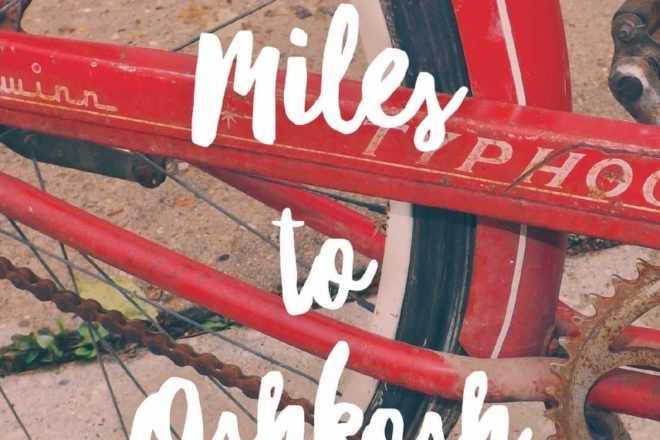 Delmar Finwick is the 15-year-old hero of Jim Guhl’s debut mystery novel Eleven Miles to Oshkosh. Delmar’s friends and relatives call him “Del”; everyone else calls him “Minnow.” Del is a sophomore at Shattuck High School in Neenah, Wisconsin, but he faces an array of problems that would make many a grown man shudder.

He is grieving for his father, a Winnebago County police officer who was recently murdered by the sniper known as the Highway 41 Killer. Del’s mother suffers from multiple sclerosis. She is in remission, but the shock of her husband’s murder has left her in a near-catatonic state. She spends her days sipping coffee, chain-smoking and staring at the TV. His older sister avoids the family entirely, spending her waking hours with her obnoxious boyfriend. And Del describes himself as the “little shrimp who was afraid of everything.” Among other things, he is the official punching bag for Larry Buskin, the school bully.

But Del’s world is brightened by his friends – Mark, who keeps Del in touch with reality; and Steve, a science nerd with a talent for extravagant practical jokes. Del’s circle also includes his devilish grandfather, Asa; and his trusty bicycle, Eisenhower (Ike for short). And then there is Opal Parsons. She is the first African-American to enroll at Shattuck High, and in Del’s eyes, she’s also the prettiest girl in Shattuck. He dreams about her during class, repeats her name rapturously in his mind and wonders whether it would be possible – somehow, in a dream – for Opal to be his date at the annual Snow Ball.

Eleven Miles to Oshkosh is set during the Nixon era, so Del and his friends have no computers or smartphones to occupy their time. Instead, they enjoy such wholesome activities as fishing, swimming, biking, organizing protest marches, driving under age and blowing up a football field. However, Del’s talent as an angler serves his family well: When the cupboard is growing bare, Del catches, cooks and serves the fish he’s caught.

But the driving force of Del’s life is not fishing, schoolwork or even Opal Parsons. Similar to heroes from Hamlet to Harry Potter, he wants revenge for his father’s murder, and he thinks he knows who the murderer is: Sheriff Heiselmann of Winnebago County. Del has seen the sheriff take an envelope full of money from a mysterious man in a Cadillac, and he and Asa have also seen the sheriff cheerfully beat an injured swan to death. Clearly the sheriff is a dangerous man – but is he really a serial killer?

Guhl’s craftsmanship is remarkable. He avoids a major pitfall for mystery writers: the tendency to leave a dead spot in the middle of the tale while the detective searches for clues and the rest of the characters pass their time by going on a picnic. Eleven Miles has no dead spots because questions abound: Can Del find a way to trounce Larry Buskin? Will Asa go to jail because of his involvement in one of Steve’s pranks? Can Del’s mother be lured away from the television and back into the world of people? Can Del find a way to rescue Wolf, a homeless Native American who lives under a pile of old railroad ties? And who, if anyone, will be Del’s date at the Snow Ball? “Holy smokes!” Del exclaims at one point. “I was busier than a squirrel in a nut factory!”

Guhl weaves all of these elements into a smooth and readable narrative. He also makes excellent use of his Wisconsin setting, especially during the thrilling climactic episode, which takes place on the partially thawed water of Lake Winnebago. Unlike some novels that seem to have no setting at all, Eleven Miles could take place only in Wisconsin.

A possible limitation in Eleven Miles is that there is no equivalent of Hermione Granger or Katniss Everdeen in this book – and indeed, such a character would have been unlikely in the 1970s, when the women’s movement was under way and was called “women’s lib,” with more than a hint of derision. But the cast of characters includes Opal’s mother, who marched to the Edmund Pettus Bridge with Martin Luther King Jr. in 1965 and who still has a lump on her head from a blow by a police officer’s club. Her story inspires Del to be steadfast in his search for justice. During the course of the novel, readers watch Del grow from a chronically frightened “little shrimp” into a confident young hero. Eleven Miles will captivate readers of all ages.