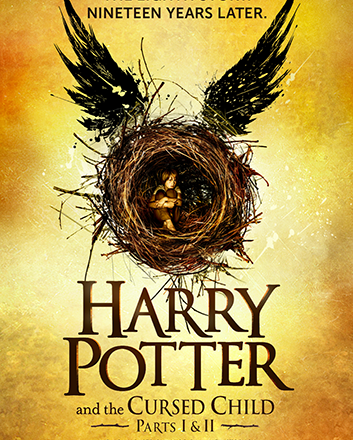 The year 2016 proved to be an exhausting time for the American electorate, but it was a good year for fans of Harry Potter and his magical world. On July 30 a play titled Harry Potter and the Cursed Child opened in London. This play is unusual in that it does not stand alone; it is a sequel to J. K. Rowling’s seven-volume tale of young Potter and his years at Hogwarts School of Witchcraft and Wizardry. Those who have read the entire work have watched Harry grow from a likeable little boy to a sullen adolescent (in Order of the Phoenix) to a confident young man in the final chapters of Deathly Hallows. In Cursed Child we see yet another side of Harry as the father of a troubled son. Someday this play may open on Broadway and then follow Hamilton to Chicago, but a curious reader can already purchase a “Special Rehearsal Edition Script” at a good bookstore.

When the script begins, Harry is 37 years old and married to his Hogwarts sweetheart, Ginny Weasley. Two of their three children seem normal enough, but their middle child, Albus, is pensive and frightened. He is about to board the train for his first year at Hogwarts, and he is afraid that he will be placed in Slytherin House, which has produced more than its share of dark wizards. He wants to be in Gryffindor, “where dwell the brave of heart” and where all of his relatives have found a home away from home. Harry and Ginny try to comfort him, but to the surprise of everyone, Albus’ worst fear comes true. Stranger still, he immediately makes friends with Scorpius, the son of Harry’s childhood nemesis, Draco Malfoy.

Three years pass. Harry is the Head of Magical Law Enforcement – a responsible position, to be sure, but it comes with stacks of paperwork, and Harry longs for action. His friend Hermione is the Minister of Magic, and she urges him to at least read his files, which contain disturbing reports of wandering mountain trolls, werewolves gone underground, and giants walking through the seas. Meanwhile, Albus is miserable at Hogwarts. He shows little talent for magic – his potions explode and he has difficulty controlling a broom – and his fellow students despise him. “Albus Potter. An irrelevance,” declares one student. “Even portraits turn the other way when he comes up the stairs.” Albus’ only solace is his friendship with Scorpius, who is also disliked because of rumors that he is secretly the son of the late Voldemort, the dark wizard who almost gained control of the wizarding world before Harry killed him in a duel.

On the night before Albus is to leave for his fourth year at Hogwarts, he and his father have an argument, lose their tempers, and shout hurtful things at each other. The next day, when Albus and Scorpius are on their way to Hogwarts, Albus convinces Scorpius to jump off the moving train with him and join him on a grand adventure – an attempt to undo one of Harry’s mistakes. As one might expect, the adventure grows more complicated and more dangerous with each passing scene, until Albus and Scorpius find themselves in a battle to save the wizarding world.

If this script is an accurate description of the stage play, the special effects must be marvels of stagecraft. At the end of Act I, for example, a bookcase swallows Albus, Scorpius, and their friend Delphi. They fight their way free, only to be devoured again. Other arresting stage directions: “The Trolley Witch’s hands transfigure into very sharp spikes.” “The form of Voldemort emerges from Harry.” Nevertheless, this book is a page-turner, impossible to put down, and it would make an excellent Christmas or birthday gift for any Potter fan, young or adult.

Cursed Child was followed by the opening of the film Fantastic Beasts and Where to Find Them. This is J. K. Rowling’s first screenplay, and it features Newt Scamander, a minor character in the Potter books who never appears in person but whose book about magical creatures is required reading at Hogwarts. In the film we meet the young Newt, who has already begun work on his famous book. He arrives in an ominously dark New York City in the year 1926, carrying a large briefcase filled with the strange creatures that he has collected for study. He plans to stay in New York for only a few hours, but because of a mix-up of luggage, some of the creatures escape – including a niffler, a fluffy creature with a long snout, the eyes of a homeless kitten, and an obsession with sparkling objects. Newt must track his creatures down before they are discovered and a disaster occurs, and before the excited niffler destroys every jewelry store in New York. It doesn’t help that a witch-hunting cult has emerged in New York, nor that a mysterious unseen force is rippling through the city, knocking down walls and generally causing mayhem.

Newt is aided by Tina, a frustrated official of New York’s magical community; her sister Queenie, a ditsy mind-reader; and Jacob Kowalski, an unhappy factory worker who dreams of owning a bakery. Together, they form the strangest band of comrades ever to undertake a heroic quest. Newt himself is a delightfully appealing hero. Pleasant and unassuming, plucky and clever, he is handy with a wand or an incantation; but, as is true of Harry Potter, his ultimate weapon is love – in this case, his love for the creatures that he has rescued and befriended.

Fantastic Beasts might make for good family fun, but it is definitely not a film for small children because it demands the viewer’s undivided attention, and many of the special effects are loud and scary. Even for an adult viewer, the abrupt scene changes may be confusing. Fortunately, a script is already available in bookstores to clear up any bewilderment. A final warning: Anyone who is unfamiliar with the Potter world should learn who Grindelwald was and how a Pensieve works before viewing Fantastic Beasts.