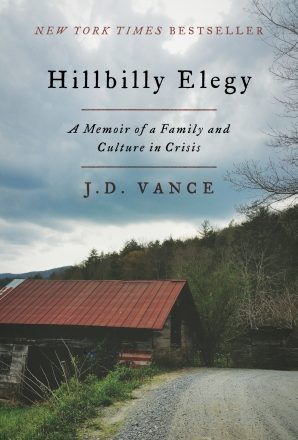 After the bombardment of postmortems following November’s election, many of us feel that we have reached the point that the autopsies of the autopsies have left no political remains to be buried. Nonetheless, let me recommend J.D. Vance’s Hillbilly Elegy: A Memoir of a Family and Culture in Crisis.

The 31-year-old author writes of his birthplace in Kentucky’s Appalachia region, his coming of age in a Rust Belt Ohio steel town, and his graduation from Yale Law School. I was curious about the hillbilly background of a man who rose above his past, in part because I was born and raised on Pleasant Ridge in an area of Wisconsin where subsistence dairy farmers worked on an equally hilly terrain, economically as well as topographically.

After the bestseller success of his memoir, Vance became a media commentator on the sociological aspects of the Donald Trump phenomenon, before the candidate became the president-elect. While liberals may throw up their hands in frustration that “hillbillies” leading a marginalized lifestyle would naively turn to a billionaire entrepreneur businessman as a beacon of hope, Vance offers a logical explanation in his book.

But he also writes a compelling autobiography, as J.D. was born to a mother with substance addictions and serial relationships, an abdication that resulted in young J.D. being raised by his grandparents. His grandmother, while a woman with rough edges, was an anchor for him as he grew up amid poverty, drug and alcohol abuse, and broken families.

However, Vance’s life as a young person was not one of the little-engine-that-could variety. He was an indifferent high school student, enlisted in the Marines, but with developing maturity, eventually became a scholar, a lawyer, and a principal at a leading Silicon Valley investment firm. While he had the good luck to live the American Dream, he writes, “the demons of life” he left behind continue to chase him.

Not surprisingly, Vance observed economic forces as factors in the marginalized existence of the people around him during his youth, a lack of jobs in Appalachian Kentucky, and disappearing factory jobs in Ohio. But Vance places as much blame on the victims of the economy as he does on those who are credited with shaping it. He is a firm believer in pulling yourself up by your bootstraps, and if need be, relocating to where jobs exist.

Ultimately, Hillbilly Elegy is not a book to be valued because of its answers but rather for its observations. This is not an academic study, he wrote. “My primary aim is to tell a true story about what that problem feels like when you were born with it hanging around your neck.

“Public policy can help,” he adds, “but there is no government that can fix these problems for us.” They were not created by governments or corporations, he maintains. “We created them, and only we can fix them.” We need to “ask ourselves what we can do to make things better.”

The book engaged me because despite geographical differences, I saw similar forces operating in his past and mine, although my youth preceded his by decades and was far less sensational. His observations are valuable in that he holds up for public scrutiny a way of life often ignored by society, or only caricatured. And while he is politically conservative and I am liberal, his book makes me examine my own beliefs. In this era of political polarization, that’s good.

Hillbilly Elegy: A Memoir of a Family and Culture in Crisis by J.D. Vance / 257 pages, HarperCollins Publishers, 2016