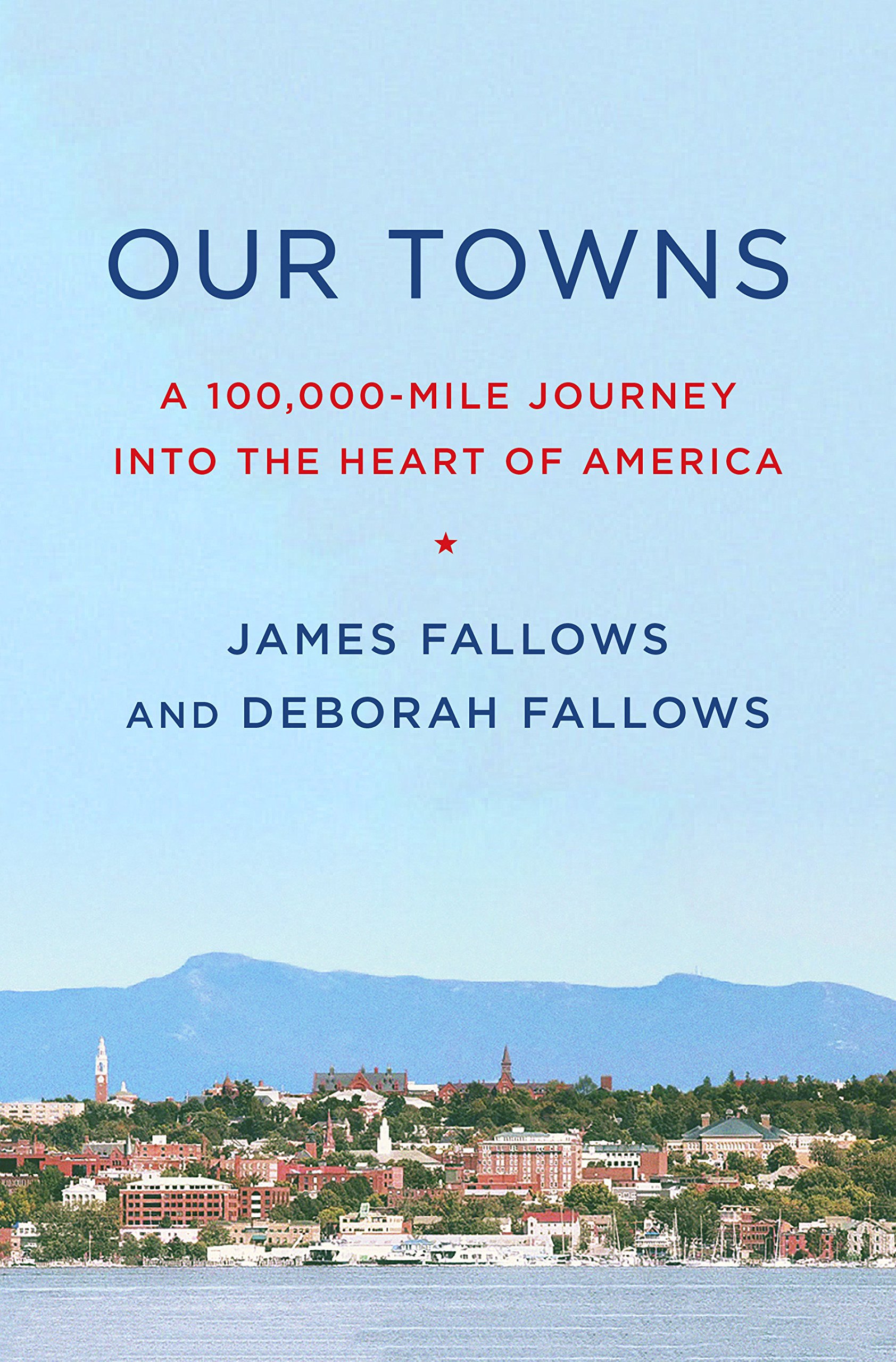 In June of 2013, writers James and Deborah Fallows climbed into their tiny Cirrus airplane, left their home in Washington D.C., and began work on a project that would take four years to complete. Their plan was to visit towns across the United States, explore each town thoroughly and write about their discoveries. Their recently-published book, Our Towns, should be required reading for anyone who is involved in a serious community betterment project or who aspires to be the savior of a dying town. People who yearn for a little optimism during these difficult days might also enjoy Our Towns. (The title is possibly a reference to Thornton Wilder and his beloved play, Our Town, an affectionate depiction of life in a New England village.)

A skeptical reader might glance at the table of contents and wonder about a pair of city dwellers who think of Pittsburgh, Pennsylvania, as a “town.” Would they really be qualified to do an objective study of small-town America? Such skepticism would be misplaced. The Fallowses visited several small cities, but they also traveled to places like Eastport, Maine, a declining village of less than 5,000 people where the median age is 55 and the median income is $27,000. They also visited Ajo, Arizona (population 3,500), a remote community that has one stoplight, no cell coverage and a view of “more stars than we knew were in the heavens.” But large or small, almost all of these towns were recovering from a serious setback – in many cases, the loss of the industry that had sustained the place and given it an identity.

Wherever they went, the Fallowses found people who were determined to make their communities thrive again. Some of these citizens were local people, others were outsiders who had never intended to stay long but became attached to their new homes. Near Redmond, Oregon, James saw a bumper sticker that he thought might serve as a motto for these people:  “Veni, vidi, Velcro” – I came, I saw, I stuck.

Most of the towns had either enjoyed a revival or were at least making noticeable progress. James and Deborah were delighted by the sight of newly revived downtown areas:  “Retail stores with lots of daytime business, and restaurants and bars and theatres and brewpubs that were busy at night. Parks that were busy, with office workers on lunch breaks and some families. Old retail and warehouse buildings that had been converted into residential lofts and condominiums.”

Deborah eventually concluded that “the mark of a successful city is having a river walk, whether or not there is a river.” James, on the other hand, is convinced that no city can enjoy true success without a local brewery or even a meadery. Mead is an alcoholic drink made from honey; it was the favorite quaff of Beowulf and his hard-living companions.

But these downtown areas are not necessarily “gentrified” locations where the poor have been shoved out of their homes and forgotten. In Greenville, South Carolina, the Fallowses discovered the A. J. Whittenberg  Elementary School of Engineering (yes, elementary), a public school located in a “distressed” area high in crime and unemployment. Enrollment is on a first-come, first-served basis, and spots are in such demand that out-of-district parents will camp out for days near the school grounds before registration day. (They may also take advantage of the discounted camping equipment offered at the local Lowe’s store.) A sample project at Whittenberg:  the first graders attend a production of The Wizard of Oz, study the physics of making a witch fly, and then design their own systems to make the Wicked Witch soar over Kansas.

James believes – perhaps mistakenly – that any hope for future “greatness” in America lies in its towns and cities, not in the national government. “For better or worse,” he writes, “it was a different America that built the country’s interstate highways and went to the moon.” There’s no longer any money for such projects, and besides, “whichever party holds the presidency, the other will likely hold enough of the Congress to make comprehensive measures of any sort very hard to push through.” But cities and towns can and should make ambitious plans. Even Prineville, Oregon, devastated by the sudden collapse of the timber industry, can still hope to build data centers for Facebook and Apple.

Unfortunately, Our Towns has one serious flaw:  it is overlong and crammed with too much detail. For example, the chapter about Dodge City, Kansas, contains more information about flying an airplane than most people will want to know. The good news is that each chapter tells a separate story, so a reader pressed for time may sample the chapters in any order. The chapter about Greenville, South Carolina, is a good place to start. And anyone who cares about his or her town or city should read the final section, “Ten-and-a-half Signs of Civic Success.” The half sign is the necessary brewery. The meadery is optional.