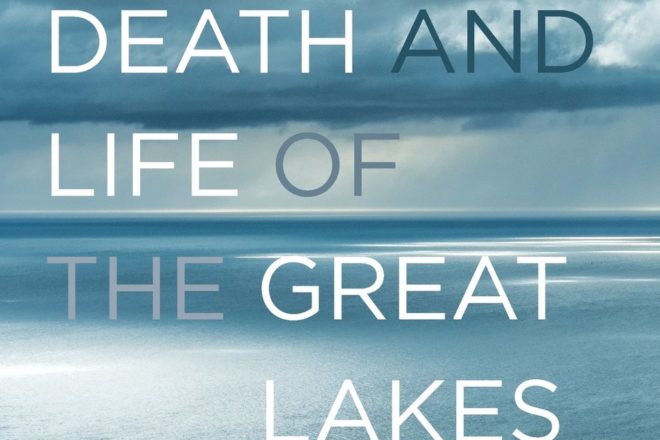 Dan Egan first became interested in water pollution during his childhood in the Green Bay area, when the Fox River was too polluted for swimming. After college he moved to Milwaukee and became a prize-winning reporter for the Milwaukee Journal Sentinel. His accolades include being a two-time Pulitzer Prize finalist.

In 2012 he took a course in book writing, and one of his assignments was to prepare a detailed outline and proposal for a book. Quite naturally he chose the subject of water pollution, but he must have been surprised when his proposal was accepted by W.W. Norton & Company. He was also horrified: Now he would actually have to write the book. But his work paid off. The distinguished result is The Death and Life of the Great Lakes.

A reader who opens Great Lakes expecting a bland presentation of graphs and statistics will get a surprise when he or she begins to read. Great Lakes is more like a murder mystery with a touch of Gothic horror. Even Dracula might be taken aback by the sea lamprey, which has a foot-long body, a single nostril on top of its head and a round, suction-cup mouth with several rows of tiny fangs. The creature attaches itself to its prey and sucks its life out. According to Egan, “If Bart Simpson had a pet water snake, it would look something like this.”

Egan’s mystery/horror tale begins on June 26, 1959, when both President Eisenhower and Queen Elizabeth arrived in Montreal to celebrate the opening of the St. Lawrence Seaway. This project was designed to link the Great Lakes to the Atlantic Ocean and transform such communities as Toledo, Ohio, and Duluth, Minnesota, into bustling ports for global trade. Walter Cronkite told his trusting viewers that the seaway would be “the greatest engineering feat of our time.”

Unfortunately, the engineers had made the locks so small that they were obsolete before the president and queen arrived for the ceremony. The hoped-for “North American Mediterranean” failed to materialize, but already the sea lampreys had found a way into the Great Lakes, where they settled in and devoured the local trout and whitefish. The lakes were turning into watery deserts without commercial or recreational fishing.

Science was helpless to rescue the lakes — until the arrival of a World War II veteran named Vernon Applegate, who was described as “living on cigarettes and aspirin.” Applegate, like Winston Churchill before him, was sure of his mission: “Complete eradication of sea lampreys above Niagara Falls.” He set up a clandestine program and managed to create a poison that could kill lampreys without harming any nearby fish. Newspapers proclaimed victory, but perhaps any celebrations would have been premature. The seaway was still open, and other invaders were at the door, including the bloody-red shrimp, the threespine stickleback, the fishhook water flea and — most ominous of all — the river herring, also known as the alewife.

The alewives were prolific breeders in the lakes but were unable to survive there, partly because of temperature swings that they had never encountered in the ocean. They died by the millions, and great piles of them washed ashore on the beaches of Chicago, smelling like human waste. Their flesh made passable cat food but not much else.

A new savior, one Howard Tanner, had the idea of stocking the lakes with salmon to feast upon the alewives. His idea worked so well that the salmon grew “fat like footballs.” The water became so thick with salmon that a determined angler could grab a fish with his or her bare hands. But what would happen if the salmon grew so numerous that they would destroy their sources of food, including the once-despised alewives?

Such is the story of the Great Lakes: one wave of destructive invaders follows another — lampreys, alewives, zebra mussels, quagga mussels, poisonous algae that creates sludge “like rotten creamed spinach.” Recoveries are followed by new crashes; cures create new diseases. And unlike most mystery stories, this tale has few villains who can be captured and safely locked up. Here and there Egan finds an industrialist who intends to become ludicrously rich, even if he has to wreck the planet in order to achieve his goal. But most of the people who appear in this book are devoid of evil intent. They hope to create a better world, to solve an intractable problem or to earn a good living. A few of them just want to go fishing.

How can the Great Lakes be preserved? Perhaps the answer can be summed up the Harry Potter character Mad-Eye Moody, whose motto is “Constant vigilance!” We might also add “constant skepticism” — even of the best-laid plans.

The Death and Life of the Great Lakes is one of the 2019 Door County Reads selections. Programming — including book discussions and play readings — will begin Feb. 2. On Feb. 9, 2-4 pm, Dan Egan will speak at the Sturgeon Bay High School auditorium as part of Door County Reads. For more information, visit doorcountyreads.org.

Carolyn Kane is a professor emerita of English at Culver-Stockton College in Canton, Missouri. She is the author of the novel Taking Jenny Home, which was named to Kirkus Reviews’ Best Books of 2014. She lives in rural Door County, where she writes for the Peninsula Pulse and Door County Magazine.