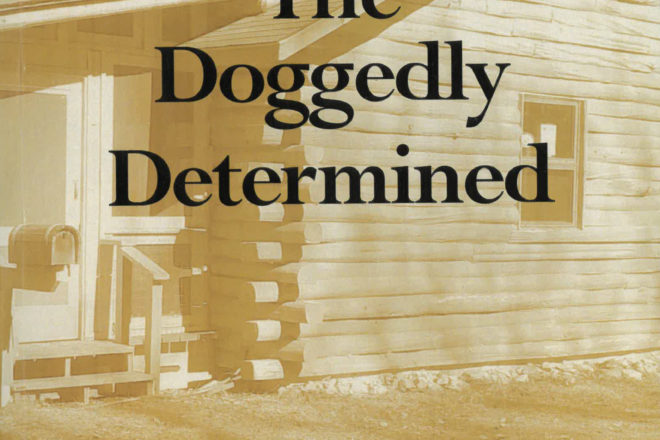 The Doggedly Determined is Bob McCurdy’s 17th novel and the first in a new series that takes place in Door County. He has two other series: the Andy McCloud mystery series (of which there are 11 books) that features a former social worker turned wood carver who lives near Baileys Harbor, and a series of five coming-of-age novels with Will Morrissey as the main character. They are set in the Northwoods area of Wisconsin.

McCurdy, similar to the protagonist in his mystery series, Andy McCloud, is a Baileys Harbor wood carver. He owns Eden North Gallery, just north of town, where he works on his writings and carvings.

In this new series, Brady Justin (BJ) Conner, a retired special education teacher, is contacted by the state child welfare authorities asking if he’d consider taking custody of his great-grandchildren, six-year-old Scott and his nine-year-old sister, Julie. The children have been taken away from their heroin-addicted mother and her drug-dealing boyfriend. Both are accused of severe abuse and neglect. The request catches BJ completely off guard since he has no idea he’s even a great-grandfather.

When the novel opens, the children are in the custody of Child Protective Services [CPS]. Scott has been found to be deaf from repeated, untreated ear infections, and multiple beatings have left him with a deformed jaw that have rendered him unable to chew or speak. Julie has been sexually abused, yet has to be there for Scott, who is totally dependent on her for everything. Despite the realization that it will be a monumental challenge to care for the children’s physical and emotional needs, BJ agrees to assume custody. The only remaining alternative would be to place them in an institution.

It doesn’t take him long for BJ to realize the task is more than one person – especially a somewhat reclusive, self-described curmudgeon – can manage. He ends up enlisting the help of his gentle border collie-mix, Arlo, and Miss Sarah Daniels, the CPS social worker assigned to their case.

As the title implies, the book is ultimately a tale of determination for every one of the principal characters. It’s through their dogged determination that the children grow, learn and begin to heal. In the process, BJ and Sarah encounter moments of self-doubt, the disappointment of lost battles, silly mistakes, and fear (especially of failure and at times intimacy). Fortunately there are several moments of comic relief and triumphs.

The reader is rewarded with the opportunity to witness numerous positive changes in each of the characters, but the story begs for a sequel. These people are a work-in-progress and we feel a need to know what happens to them. Where do they go from here? How are they going to manage the past or is it going to end up plaguing them?

Barbara Becker is a retired high school business education teacher who taught for 30 years in Oregon, Ill. She has always been an avid reader and enjoys both fiction and nonfiction literature, especially when they’re set in areas that she recognizes here in Wisconsin. She currently lives in Minocqua, Wis.