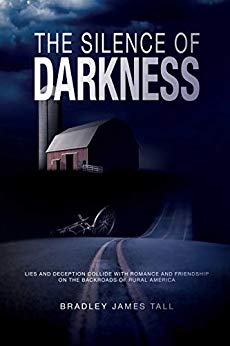 Nothing refreshes the spirit like a drive in the country. The car glides past green hillsides where contented cows graze, past broad fields where corn grows tall. Somewhere a farmer and his wife rest in their Adirondack chairs and bask in the sunlit beauty of the scene, their hearts and minds at peace.

But in the back of the traveler’s mind, there may be an echo of the black-and-white film Holiday Inn, in which Bing Crosby’s character attempts to find rest and relaxation as a farmer. After only a few months of country life, he lands in a sanitarium, practically foaming at the mouth. Farming, he discovers, is the “hardest work in the world.”

Bradley James Tall might sympathize. He grew up on his family’s dairy farm, and as an adult he operated a farm in Door County with his wife and son. In his novel The Silence of Darkness, he depicts farmland as a downright dangerous place where the happy farmer might get kicked by a disgruntled milk cow or beaten to a pulp in a barroom brawl. Nor is every farm a thing of beauty. Ozzie, the misfit of his community, is the sort of farmer who saves all of his broken-down machines in case he someday needs a part. As a result, his land is cluttered with “half-dismantled tractors, plows, hay-rakes, choppers, wagons, corn planters and other unidentifiable piles of rusty steel.”

The Silence of Darkness has two intertwined plots and two heroes. The primary plot is a traditional murder mystery. Billy Truax is a deputy who’s considering a run for sheriff of Door County, but his probable opponent, Lieutenant Gibson, is described as a “hurricane of a man.”

Truax and Gibson have disliked each other since their days as high school football players, but Truax is contending with a bigger problem than a juvenile grudge. A Hispanic teenager named Hector Gonzales has mysteriously vanished, and Ozzie is suspected of murdering him and hiding the body. Truax has made a vow to the teen’s parents that he will find their son, and he is not the sort to make vows lightly. Gibson, however, has political reasons for wanting Ozzie convicted, and he does his best to keep Truax away from the case.

The secondary plot is a romance starring Paul Thornton, one of Truax’s oldest friends. Thornton is a veterinarian and a widower with an irrepressible daughter, Mickie, who is “13 going on 30.”

Lately he’s grown weary of his life as a college professor. He writes for agricultural journals – publications that no one is likely to read except the editors. When a position opens up in Door County, Thornton gladly starts packing. At last he can practice real veterinary medicine on real animals!

When he gets his first glimpse of Carrie Delmore, the woman who will become the love of his life, she’s not exactly floating across a crowded room. Instead, she’s standing in a barn trying to assist a struggling cow with a difficult birth, and she’s dripping with blood and manure. It’s not the usual stuff of romance, but Thornton is immediately smitten. There is a problem, however: Delmore is already married to a philandering man with a wealthy family and a bad temper. So far, his abuse is verbal, and she insists she can handle him.

Tall is a skillful storyteller, and he has a knack for characterization. (A reader would have to hate children not be captivated by Mickie.) Some of the early chapters are perhaps too slow-paced – although the first chapter sets the stage with a fist fight – but when the pace quickens, Silence becomes an absorbing story with an exciting climax.

During the 1990s, some of the events in Silence – and in particular the solution to the mystery – might have been difficult, if not impossible, for many readers to believe. Sad to say, such events now turn up with benumbing frequency, both on televised news and in the headlines. Tall shows his readers a side of Door County that is not reflected in any travel brochures.

Silence has one major flaw: It is riddled with errors in grammar and word choice. Some of these mistakes might be overlooked, but others are glaring, as when Tall confuses the words “gesture” and “jester” or when he describes a herd of cattle “grazing in the sun, their white faces shining like poke-a-dots.” When Tall prepares his next manuscript for publication, he might consider hiring a capable proofreader.

The Silence of Darkness is the October selection of the Great Lakes/Great Books Club, which is open to all. The group will discuss the book Oct. 3, 10:30 am – 12 pm, at the Door County Maritime Museum in Sturgeon Bay, with the author in attendance.