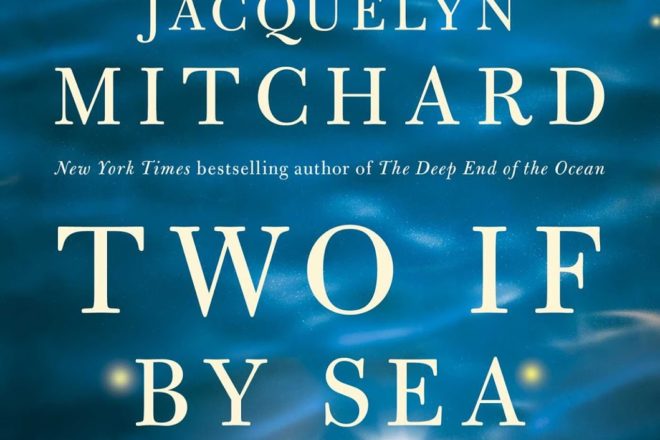 Frank Mercy, the hero of Jacquelyn Mitchard’s latest novel, is the most star-crossed fictional character since Romeo and his Juliet. At the end of the four-page first chapter of Two If by Sea, Frank’s life has already been destroyed twice, and more wreckage is certainly on the way.

Jacquelyn Mitchard, a long-time resident of Madison, first came to national attention as a syndicated columnist. With her best-selling first novel, The Deep End of the Ocean (1996), she began her successful career as a writer of fiction.

Two If by Sea is a book of twists, turns and surprises. In flashbacks the reader learns that Frank had once been an enthusiastic mounted patrol officer in Chicago. His career was cut short, however, when his right leg was shattered in a freak accident. He contemplated suicide but instead moved to Australia because it seemed like a place “where a guy could get lost.” Near the city of Brisbane he found satisfying work training horses on a pleasant farm; he also met and married Natalie, a highly respected doctor. She was something of a free spirit: at her wedding she kicked off her shoes and sprinted up the aisle toward her groom. Natalie soon became pregnant with a son, but on Christmas Eve, when the actual story begins, Frank watches helplessly as she and her entire extended family are swept away in a tsunami.

Later that night Frank rescues a three-year-old boy from a partly submerged van. Numb with grief and not quite understanding his motivations, Frank names the child “Ian,” gets him a forged passport, and takes him to the family home in Spring Green. But Ian is no ordinary child: he possesses an astonishing psychic power. He calms a hysterical mare simply by touching her leg. He encounters Jack, Frank’s grandfather, who suffers from homicidal dementia and hasn’t spoken a word in years. Ian makes some mysterious hand signals, and Jack flops down, drops his deadly shillelagh, and asks in a creaky voice, “Who are you, son?” Ian brings a murderous fistfight to a sudden stop by making his hand signals and touching one of the combatants. He can also put ideas into people’s minds, as when Frank’s mother goes to Spring Green to buy a washer-dryer set and instead comes back with an enormous aquarium filled with exotic fish – much to Ian’s delight.

Then Frank meets a beautiful blonde named Claudia. At the age of 33, Claudia is already a psychiatrist and a tenured college professor, but she has taken time off to train for the Olympic equestrian team. After her workouts, she has enough energy left over to be a dynamo in bed.

By this time, a reader might suspect that nothing good can come of this bizarre situation. It turns out that a shadowy mob of professional criminals has followed Frank and Ian from Australia and is plotting to seize Ian and make use of his powers in order to gain riches and possibly rule the world. After much delay, Frank decides to take Ian to a remote village in England, where they will supposedly be safe from shadowy mobs. Claudia agrees to marry Frank, abandon her career and her Olympic dreams, and go with him to anonymity in rural England. But can any home, no matter how remote, offer them true safety?

Mitchard is a gifted storyteller, but Two If by Sea has many obvious flaws. For one thing, Frank is a Hamlet-like puzzle. He is so mopey, self-absorbed and indecisive that it is difficult to imagine him as a brave policeman, let alone as the hero who could sweep two superwomen off their feet. And even a reader who loves fantasy may find it easier to accept Ian’s strange powers than to believe in Claudia’s perfection – a beauty, a genius, a world-class athlete, a wonderfully satisfying lover, yet submissive and motherly at the end.

Mitchard’s depiction of Wisconsin is a disappointment: The Mercys never eat whitefish at a supper club, go to a Badgers or Brewers game, or stroll through the lovely hillsides near Spring Green. Two If by Sea might as well have been set in Texas. Mitchard’s prose is often clumsy and confusing, and she seems to struggle for fresh figures of speech, as in this example: “[Frank] might be an emotional snowball, picking up debris, heft, and contour as it swept downhill. Shock and grief, followed close upon by the power of being a [mediocre] savior, brewed up a recipe for rebound attachments.” In short, Two If by Sea appears to have been rushed into print without adequate editing.

None of these flaws will greatly matter, however, to anyone who gets swept up in the story and can’t stop turning the pages. Such a reader will not even notice that neither Frank nor the shadowy mobsters show any signs of competence. The best advice for someone who enjoys tales of the supernatural is to get this book, enjoy it, but don’t try to make sense of it.