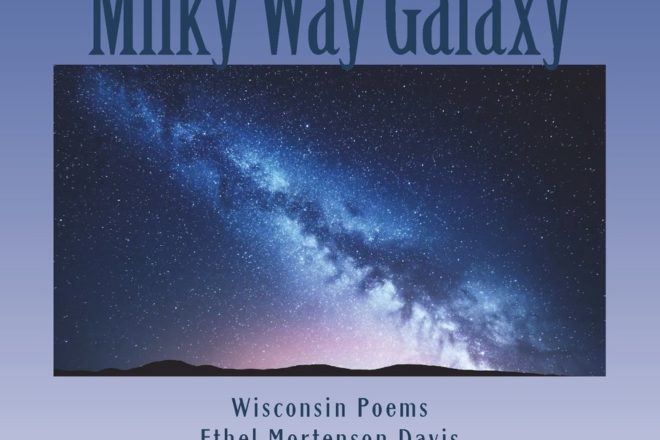 As the winter season takes hold, many of us feel oppressed by a sense of foreboding, and for good reason: Winter is a time for wheezing from the flu while watching the long driveway fill up with snow, and for monitoring the progress of an ice shove as it inches its way across the lawn and toward the front porch.

But even as flu sufferers swallow more aspirin and open fresh boxes of tissues, they might remind themselves that winter has its own charms and joys and has provided great inspiration for filmmakers, composers, songwriters, landscape painters and poets such as Ethel Mortenson Davis.

The Wisconsin Library Association has listed Davis’ latest book – Under the Tail of the Milky Way Galaxy: Wisconsin Poems – as one of the Outstanding Poetry Books of 2019, and it will make excellent winter reading because of its numerous evocations of winter “in the land of lakes and trees / with dancing green lights.”

Davis’ poems might be described as extended haiku because their images are sharp and spare, and because they contain the element of contrast that a reader would expect in a well-crafted haiku.

A good example is “Presentation,” the poem that gives the book its title. In it, a father straps his newborn daughter to his chest and skis out into the clear night, presenting her to the stars. Someday, he knows, she will perform the same ritual for her own newborn child, just as their ancestors had done long ago “under the great tail / of the Milky Way Galaxy.” This poem is reminiscent of a scene in the groundbreaking 1977 television series Roots, in which Kunta Kinte lifts his infant daughter toward the stars and exclaims, “Behold the only thing greater than yourself!”

Another wintry example is “Kinship,” in which Davis recalls the childhood joy of running through the snow into the woods to hear the howling of the wind in the trees. But on the ground beneath the lashing treetops, all is calm and still, and the trees provide a refuge.

Davis concludes, “I think of trees / as family, / kin.” (Unfortunately, we are not always kind to our relatives. In “Trees,” Davis asks, “When our great, great, grandchildren / ask us what we have done / to save the trees on our planet, / will we be the generation of enlightenment, / or one with empty hands?”)

Although many of the poems in Milky Way Galaxy depict winter scenes and moods, the book is not entirely about winter. In “Winter Solstice,” the Earth itself rebels against darkness and “allows light to emerge / longer in the morning / and afternoon — / sunlight able / to warm our deepest bones.”

In the charming poem “Sisters as Flowers,” Davis describes the first of three girls as a rose – “feminine yet voluptuous,” the most striking flower in the garden – but the alert reader will sense that Davis seems a bit concerned about the rose. Her sister is a lily, strong and proud: a fitting example for other girls. And the third sister is a daisy, “clean and fresh / and wholly authentic.” Davis suggests that the daisy is the most promising child of this particular family – “one to have in your corner.”

Family values – and sometimes the lack of them – are important subjects for Davis, who considers even the trees to be part of her extended family. Her lively poem “The Cook” is a tribute to a woman who gathers her grumpy, disaffected relatives and friends around a table, probably at Thanksgiving, and “binds up the disgruntled / by cooking magic.” This woman is not just a cook, but a sorcerer: “Why, these two are speaking / when they haven’t for years!” Her magic is possibly helped along by the “rare French wine” that she serves with the meal.

The collection’s penultimate poem, “An Evening,” is Davis’s tribute to summer and to a twilight filled with pelicans, birch trees, laughing girls, gentle waves at the shore and a rising crescent moon – so much beauty that “no more can fit / into the evening.”

People who love Wisconsin’s rural spaces will read Milky Way Galaxy with pleasure and keep it on hand to read more than once. And perhaps they will nod their heads in agreement with Davis’ sentiment in her haiku-like “Poems”: “The universe / throws out poems / across the stars, / but only the poet / catches them.”