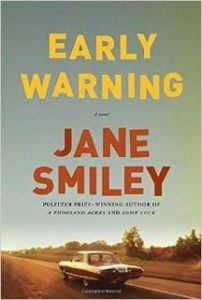 Jane Smiley won both the attention of her readers and a Pulitzer Prize for her 1991 novel A Thousand Acres, a family narrative dealing with an Iowa farm in a plotline that mirrored the tale of Shakespeare’s King Lear.

Now the prolific author has written a trilogy, “The Last Hundred Years,” a family saga that again has its roots in rural Iowa. In book one, Some Luck (2014), Walter Langdon and Rosanna Vogel marry and raise six children on their farm. What follows is a sprawling tale beginning in 1920 that follows the lives of an extended family. Early Warning (2015) continues the story from 1953 to1986. The last book in the trilogy is scheduled to appear later this year and will bring the family members up to 2019.

The structure of the trilogy is unique in that every chapter of each book is one year in the life of the extended family and consists of a series of vignettes involving various members. Readers may find that Early Warning, like the first book Some Luck, begins slowly, a tale that is interesting but not especially engaging. However, the steady pace of both novels has a cumulative effect as the reader becomes more intimately acquainted with the lives of the characters and is gradually drawn into the collective narrative. The pages begin to turn faster as lives become more intricately intertwined.

While the novels are designed to stand alone, and certainly can, fans of Smiley would do well to begin with book one for a richer fictional experience. New family members are born as time passes, and predictably, others die. As in all families, the questions of nature and nurture arise, sins of the fathers visited on the sons, spitting image of grandmother, harvesting what you sow, making your bed and lying in it. The more families are different, the more they are the same.

Smiley’s technique in telling her story is dauntingly impressive, offering the challenge that a dog walker might face in simultaneously walking 20 dogs on leashes. The Langdon’s children marry and have children who in turn have lives of their own. Most characters are developed through a complete narrative that is told in segments, as if the author had written a novella centered on each family member, and then treating those stories as threads, had woven them together in a complex tapestry. Unlike many novels, no central character emerges.

One feature of the novels that makes them enjoyable is the fact that they do not move forward in a vacuum, but rather reflect the social, political and historical elements of the time, sometimes as a plot factor but more often as a subtle backdrop that adds to the depth of the narrative. In book one, the Depression and World War II were factors; in Early Warning, the Cold War and the hippy movement.

Perhaps the greatest strength of the trilogy lies in its mythic scope, its ability to capture a way of life that is unique to this country. The United States has an agrarian history with a pattern of migration from the country to the city, an archetypal fact this and many other readers find in their own lives. Iowa, maybe more than any other state, reflects a rural lifestyle centered on the family farm. In most of these families, one child might remain on the land to make a living while the other siblings leave to find their lives elsewhere, often in an urban setting. The little fish of small family farms are swallowed by the big fish of larger and larger acreage owners – a thousand acres?

And this change is not in itself evil, any more than the demise of the one-room school. But many of us are left with a vague sense of loss and regret, for what once was but now is gone.

Frank Langdon, the oldest son of Walter and Rosanna, is an especially intriguing character. From his birth his parents considered him a difficult child, bright but undisciplined, a sneaky rule breaker who in the army found success as a sniper, as a lover was never faithful in relationships, and as a businessman was ruthless in making a fortune. But later in life he, unexpectedly, financially bails out a younger brother on the family farm, and ultimately, perhaps because his own twin boys are too much like him, finds himself wishing that a nephew who stayed on the farm had been his son.