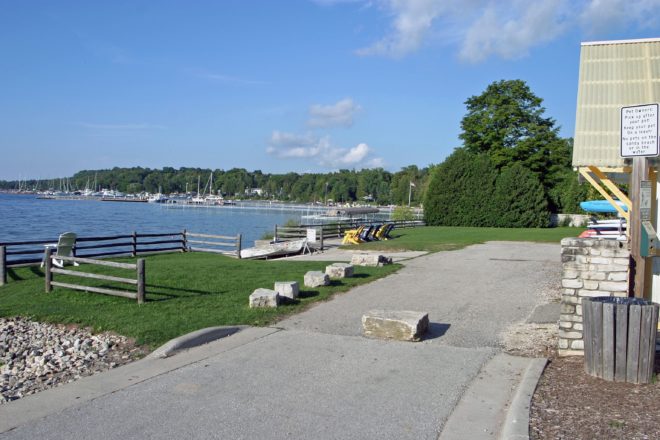 Village of Egg Harbor residents had a chance to air their views on the present and future Beach Park during a charrette conducted by two members of the Madison office of the architectural and engineering firm SmithGroupJJR.

A charrette is simply an interactive meeting held as a means of informing stakeholders and garnering their input on a project.

Coastal Engineer Margaret Boshek and Landscape Designer Nathan Hilmer explained they are specifically working on the design and engineering for a northern beach expansion that was recently funded to the tune of $32,000 by a grant from the Wisconsin Department of Administration’s Coastal Management Program.

That project involves removing a sea wall and making a more natural and soft entry into the water from that end of the beach.

However, they also thought this would be a good time to take a complete look at Beach Park so the village spends its money wisely. Currently the park seems to be a series of loosely connected parts – the beach, the prairie-like water retention area that separates the beach from the parking lot, a picnic area, a water sport rental shack, and the underused steep grassy overlook at the northern end of the beach.

Boshek said once the sea wall is removed, they want to remove the steep slope to the water, creating a universal access to the beach for children and people with limited mobility. 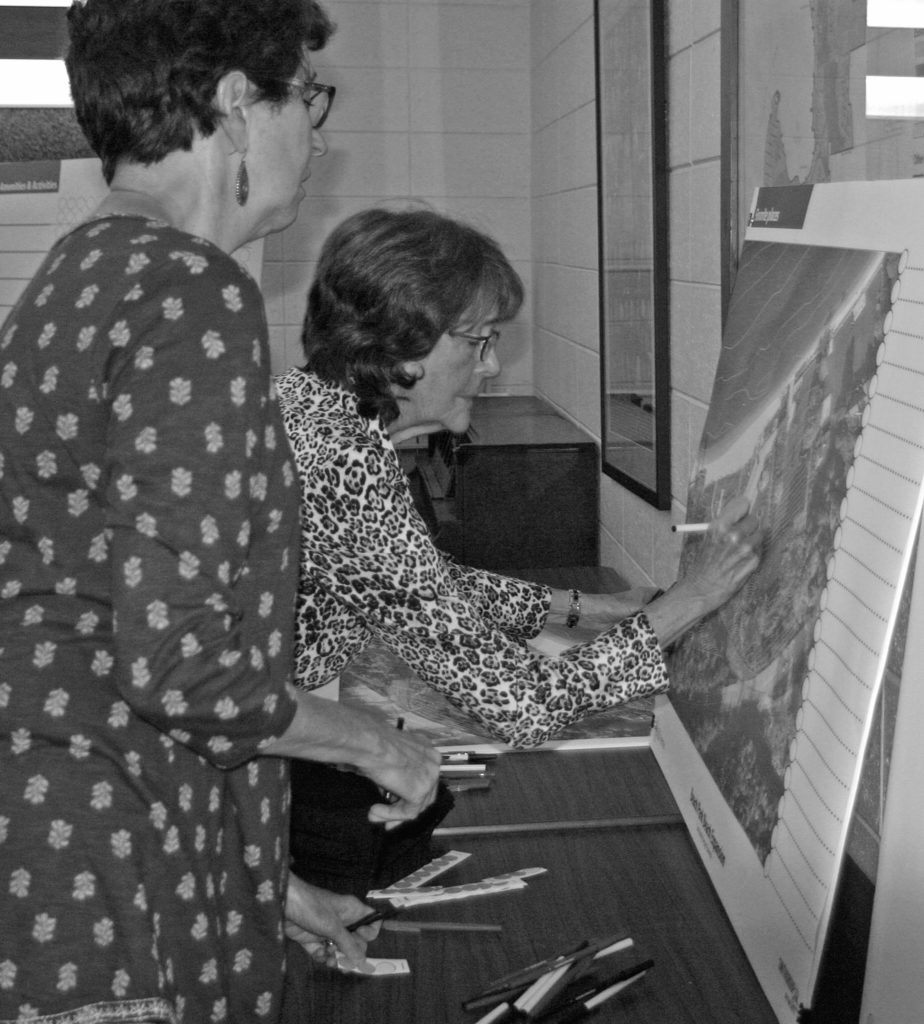 Mary Reilly (left) and Myra Cristall mark the places they visit at Beach Park during the Village of Egg Harbor’s beach expansion charrette on Aug. 28. Photo by Jim Lundstrom.

She added that it would be nice to integrate the underused upland park directly behind that section of beach.

The two presenters showed slides from other beaches, both on the peninsula and elsewhere, with potential ideas that could be incorporated at Beach Park. Boshek warned that this sort of design process is not a linear path, but a circular one.

“You’ll be dizzy when you get there,” she said.

She asked the attendees to think about what makes the park memorable to them, what aspects do they enjoy and what do they want changed? They suggested more public art to enhance the character of the park, an adventure playground made of more natural materials that allow kids to be creative in their play, and perhaps another multi-season picnic shelter with a fireplace, overlooks, firepits – things to bring and engage more people to the park.

Former village board member T.C. Johnson asked if the beach parking had been considered because he and several others pointed out, there isn’t enough parking at the beach now. The parking issue turned out to be one of those items that most agreed needed to be looked at again.

There were also calls for leaving the steep grassy slope so winter residents can continue to use it as a sledding hill, moving the watersport rental shack and rebuilding it to look like it belongs in the park.

Boshek said the next step in the process will be for them to present a refined concept to the village steering committee on Sept. 8, and then move into schematic design and beginning the permit process with the DNR and Army Corps of Engineers. She said in November they hope to begin looking for construction grants.