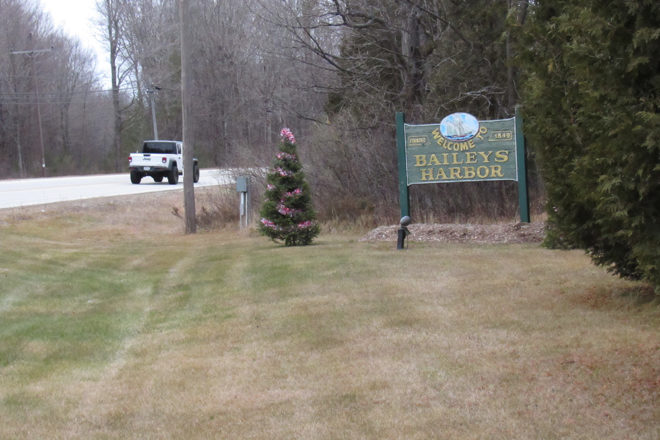 During the Baileys Harbor meeting for rewriting the town’s comprehensive plan, Baileys Harbor resident and county board member Bob Bultman asked town officials to do what they could to maintain a woodland corridor along Highway 57 near the north and south entrances to the core of the community. Photo by Craig Sterrett.

Baileys Harbor Planning Commission Chair Dr. Tim Tishler asked for community involvement in shaping Baileys Harbor’s comprehensive plan for the next decade, and he got it.

Thirty-three people logged in to the first of many meetings for rewriting a comprehensive plan that was last revised in 2013 and still contains some observations from 2002. The commission will work on the plan steadily from now until 2022, but commissioners expressed some urgency in acting on some issues soon, not two years from now.

The planning commission mainly delved into one section of the old plan: goals for land use. The land-use section has become quite outdated, according to Tishler and commission member Paul Salm.

For starters, the old plan suggests that the main opportunities for development are mostly in the “core area” of “downtown,” considered the short stretch of Highway 57 from near the Blacksmith Inn on the north toward Frogtown Road on the south.

“We now have 40 acres near the park to consider,” Salm said, referring to land around the ball diamond southwest of “downtown.”

Other potential growth areas mentioned during the meeting include the area near Door County Broadband and two thriving campgrounds along Highway F, and the area south and west of the heart of unincorporated Baileys Harbor.

Data within the old plan also needs updating, such as the townwide assessed value of taxable property, trends in prices of commercial and residential real estate, land values, the percentage of owner-occupied residences, new-construction statistics, a current inventory of homes for sale and the overall number of short-term rental permits within the town.

Tishler said the percentage of homes occupied by residents surely has changed since 2013, the number of homes for sale may be 10 percent of what it was then, and most of the shoreline property is not owned by residents. He said one pressing concern is developers who want to build structures that detract from Baileys Harbor’s quaint, rural ambience, as has happened in other Door County communities.

“There are things that are going on that are just blowing away the character of our small communities,” Tishler said. “There’s a lot going on nine miles to the north that I really don’t want to see happening here.”

Peter Jacobs, a town board of supervisors member and representative to the commission, said he does not want people to misunderstand the town officials’ intentions. He said they do not want to tell people they can’t have residential property on Main Street or that every house needs a 45-degree pitch. Commission member and retired clerk Jane Pluff said she hoped property owners and business operators didn’t think the town would tell them what color to paint their house or shutters either.

While the commission focused on just a few pages of the old plan, Salm suggested the town start work on creating a design-review process. He said a portion of the plan beginning on page 112 had set the groundwork to “add some teeth” to town goals by setting up a timeline for passing ordinances to enforce rules about development, signage and reducing light pollution. However, he said it appeared that the process was “simply abandoned” at some point.

Jacobs said there was an introduction of “way-finding signs,” but some efforts ran out of steam. In addition, Baileys Harbor installed streetlights that help prevent light pollution and appeal to stargazing interests. Since then, commissioners noted that a new business has recently installed signs that shine upward and do not conform to a “dark-skies initiative.”

Tishler also talked about retaining the scenic image of the Highway 57 corridor. He said he’s glad the town acquired a tiny parcel and created Lakeshore Park so motorists have a great view of Lake Michigan as the highway winds into town.

Baileys Harbor resident and county board member Bob Bultman asked town officials to do what they could to maintain a woodland corridor along Highway 57 near the north and south entrances to the core of the community. Commissioners noted that The Ridges Sanctuary has some control of land to the north, but there are private landowners there, too. Commissioners also noted some subdivision development northeast of Maxwelton Braes and north of County E and west of Highway 57 has been taking place well off the road, set back into wooded areas. Lawrence University preserves a lot of woodland east of Highway 57 on its Björklunden property as well.

The Baileys Harbor comprehensive plan, currently being revised, is available for review at baileysharborwi.org. The next meeting of the planning commission will be Jan. 18, 6 pm. Discussion will center on the plan’s Land Use section, pages 43-65.