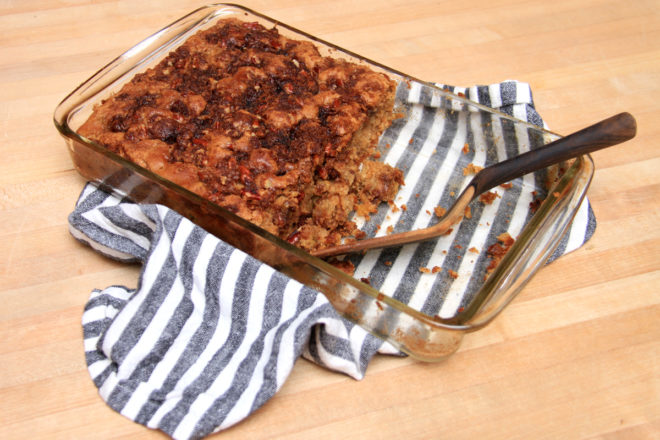 Rhubarb is a vegetable that originated in China about 4,000 years ago and was originally valued for its medicinal qualities. When it made its way to Europe during the spice-trade era, its value was on par with rubies and pearls. In Europe, rhubarb was first cultivated as a decorative plant, but during the 18th century, it was incorporated into Russian cuisine. Rhubarb began to appear throughout Europe and eventually arrived in the Americas with immigrants. It has been growing in the backyards of America ever since.

As winter transitions into spring, some of the first bursts of life that break through the soil are rhubarb. This perennial plant thrives in our northern climate so well that I would put it in the “set it and forget it” category: it’s very low-maintenance to grow; it’s easy to divide and share; it’s almost impossible to kill; and it bulks up year after year with little or no attention.

Rhubarb is ready to harvest mid-spring. Not only is it a fresh garden ingredient to add to your spring menus, but it also adds texture and dimension to its surroundings: it’s pretty to look at. The leaves contain oxalic acid — a known contributor to kidney stones and other health ailments — so the leaves are labeled inedible and poisonous. The stalks, on the other hand, are edible and rather delicious.

The visual aspects and texture of rhubarb are similar to those of celery, but that’s where the similarities stop. Rhubarb historically has been incorporated into pies, crisps and other sweet spring treats, so 19th-century cookbooks dubbed it the “pie plant.” Turn-of-the-20th-century English children ate raw rhubarb dipped in sugar as a spring treat, and that tradition continues.

Due to its extremely tart flavor, rhubarb is typically boiled into a sauce with a sweetener or added to a baked treat, which contributes to this vegetable’s mistaken identity as a fruit. But however you perceive it, rhubarb takes its well-deserved place in the culinary spotlight every spring because of its availability and versatility: it can be roasted, pickled and incorporated into salads, slaws, soups and, of course, desserts. Its tangy, tart flavor is unmatched in the early spring, and it pairs nicely with ginger and apples.

I recommend harvesting the stalks when they’re young because their tartness increases with age. Fresh, young, raw stalks can be chopped and incorporated into salads and slaws.

This early-spring vegetable is a beautiful addition to your backyard garden and is readily available for purchase at local garden centers. If gardening is not in your future, you can buy rhubarb stalks at farmers’ markets and local grocery stores in season.

Measure and set aside:

Combine in medium bowl and set aside:

In large bowl or kitchen mixer, cream together:

Alternate adding dry ingredients and sour cream to the butter, sugar and egg mixture. Mix thoroughly between each addition until all ingredients have been blended together and are smooth.

Spread cake batter in prepared baking dish and set aside.

Mix together until crumbly and sprinkle over top of cake:

Bake cake for 45 to 50 minutes or until done. This moist cake is a great addition to any breakfast or brunch.

Mix together in saucepan over medium-low heat:

Cook ingredients down to a sauce, approximately 15 minutes, stirring often. Add the chopped apple or pear to the sauce as it cooks down — the tang of the rhubarb and spice of the ginger pack a flavorful punch, so this will soften and round out the flavors. You can also add a handful of dried fruit of your choice for texture.

This sauce is a great addition to oatmeal, yogurt or ice cream. Add a dollop to grilled chicken or pork, or mix a spoonful into your rice pilaf. Rhubarb sauce is a versatile condiment to have on hand throughout the spring season. It will keep in the refrigerator for up to seven days if stored properly.

Enjoy the flavors of spring!