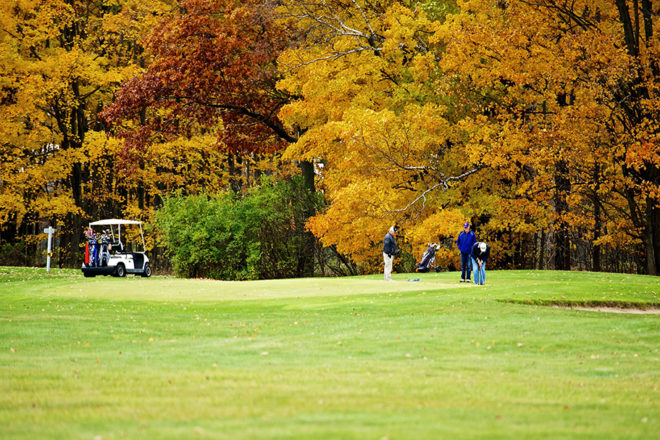 On the greens at Maxwelton Braes Golf Course. Photo by Len Villano.

The first golf club in the United States, Harleston Green, was established in Charleston, South Carolina, in 1786. (The space was also used for cattle auctions.)

As the sport worked its way west, the Chicago Golf Club, founded in 1894, was the first to offer an 18-hole course. When 20-year-old hometown amateur, Francis Ouimet – with a 10-year-old caddy – won the 1913 U.S. Open in Brookline, Massachusetts, it opened the game to “everyday people,” and two million Americans took up the game.

The Alpine Resort in Egg Harbor had begun offering golf in 1925, but there was nothing on the east side of the peninsula. In 1928, the Advocate reported that Frank Blakefield of Baileys Harbor was asking businessmen to contribute $15,000 each to form a corporation to build a golf club on 52 acres he had optioned at the triangle where County E and Highway 17 (now 57) join. The property was owned by Peter and Tom Collins. Unfortunately, the corporation was not successful.

About this time, Michael McArdle, who had grown up on the family farm along Highway 17 near North Kangaroo Lake Road and was now a very successful businessman in Chicago, was visiting in Baileys Harbor. He was an accomplished golfer, belonging to two clubs in Chicago and playing at a golf resort in Mississippi when he vacationed. Kriss Schorer told the story of how her great uncle’s idea became a reality at a recent meeting of the Baileys Harbor Historical Society.

Michael and his brother, Jim, walked the land that Blakefield had optioned, much of which had once been the McArdle farm, and drew sketches of how a golf course could be laid out. A well-known course designer, Joseph Roseman, designed the 18-hole course, and construction began in 1929. Because the Great Depression was in full swing, a project that provided many jobs was very welcome in Baileys Harbor.

Among the local men who brought teams and wagons to carry away stones and prepare the land were Archie Reinhard, Walter Hein, Pete Collins, Walter Kinsella, Edward and Bill Apel, Joe Kwaterski, Bill Root, Freand Toseland, Charlie Burlo, Walter Schitz, “Greem” Carter and Ben Patzu. Bill Pleck from Fish Creek worked with his tractor, and Tom Goss from Kangaroo Lake planted birch trees on each side of the highway and along the entrance to the clubhouse. The Peil boys, Roland and Hans, hauled sand from the Heins Creek area for traps on the course. Jim McArdle, overseer of the project, told stories about the hoop snakes he switched so they would grab their tails in their mouths and roll away into the woods. Schorer reminded the audience that her great-grandfather was Irish and had a great bit of blarney in him.

The nine holes on the west side of the highway opened to the public in 1930, with the east side nine opening a year later. Par was 72, and there was a trap for every par stroke. Par was later reduced to 60, but is now 70 on the 6,070-yard course. Milton Henquinet, the year-round maintenance man and caretaker, and Gorden Brann, the greenskeeper, both began work when the club opened and stayed more than 40 years. The name, Maxwelton Braes, came from the first line of the song, “Annie Laurie,” “Maxwelton Braes are bonnie,” that Michael McArdle heard during dinner at the Edgewater Gulf Hotel in Mississippi.

The famous 19th hole gave golfers a chance to win a medal for a hole-in-one after completing their rounds. The first medals were gold-plated bronze; later versions were silver-colored stamped coins.

Door County men who worked on the Tudor-style clubhouse were Frank Oldenburg, Bill, Carl and Gus Brungraber, Milton Henquinet, Morritz Weise, Homer Remillard, Ferdinand Jorns, Sr. and Jr., Goldie Price, John Buechner and Albert Schneck. They worked through the winter by throwing sand over culverts with fires burning in them to heat the sand.

Early brochures described the clubhouse with its 16 guest rooms as a “sylvan paradise,” with appointments “that are marvels of elegance and comfort.” The nominal room charge ($8 per night per person) included three meals. There was also a tearoom called the Wee Inn at the entrance to the property, five cottages, tennis courts, a garage for guests’ vehicles and accommodations for chauffeurs. 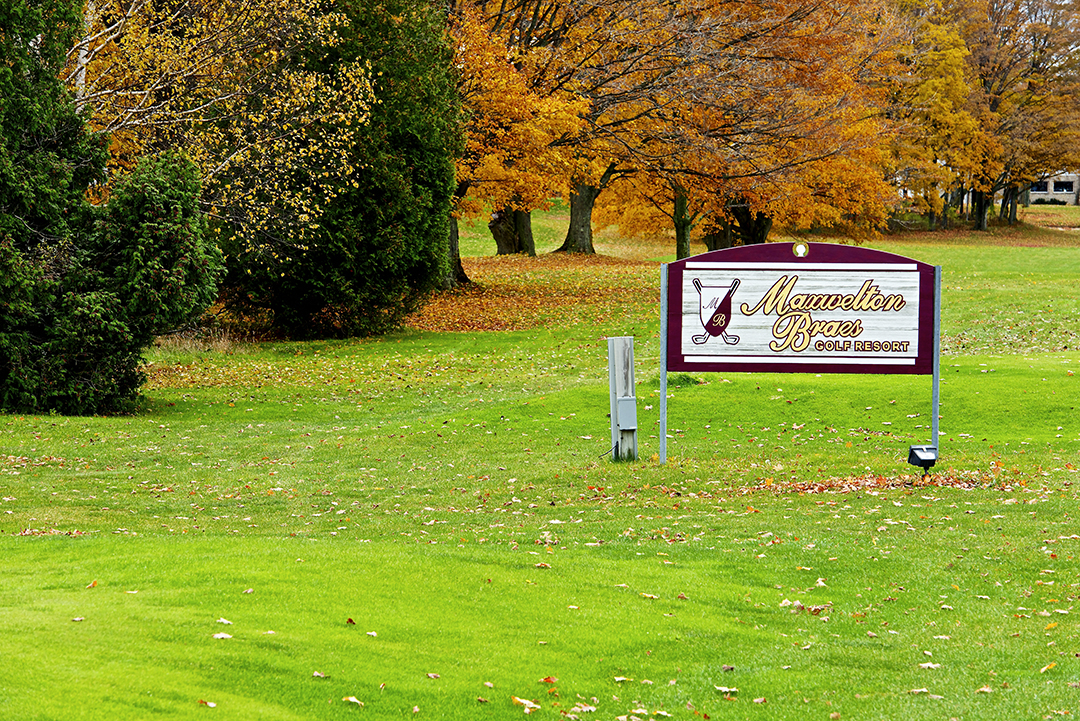 The name, Maxwelton Braes, came from the first line of the song, “Annie Laurie,” “Maxwelton Braes are bonnie.” Photo by Len Villano.

The first pro was Arthur Saunders, who continued to spend winters at the Edgewater Gulf Hotel in Biloxi. Caddies were common before the advent of golf carts. Charles Tishler remembered at the Caddie Reunion in 1992 that there had once been 125 of them. Each had to purchase a numbered badge for 50 cents that was returned at the end of the season. In those days, golfers carried 30 to 35 clubs. Gardner Orsted remembered that a caddie earned a dollar for carrying one bag for 18 holes. As the Depression grew deeper, caddy fees were reduced to 50 cents, but the boys went on strike until the rate went back to a dollar.

McArdle had planned for the clubhouse to be for selected members and invited guests, but found there were too many extra guests and changed the policy to public access. For many years, Claudia Pereira, formerly of the Edgewater Gulf Hotel, was the resort manager.

Michael McArdle died of cancer on May 16, 1935, at the age of 51. Visitation was held at Maxwelton Braes. His estate ran the resort until his nephew, Harry Ridings, was appointed manager in 1938, with a weekly salary of $50.

Maxwelton Braes hosted the Wisconsin Open Golf Championship in 1947. In 1948, the Los Angeles Rams spent two weeks of their training camp at the course, with a practice field on Fairway #11. The Packers beat the Rams on Oct. 17, although many Sturgeon Bay residents waved Ram pennants and shouted, “Go, you LA Rams, Go!”

Fires in 1983 and 1997 necessitated some rebuilding. When Ridings died in 1993, his wife, Lois, took over as manager of the resort, with assistance from Harry’s nephew, Don Krout. Harry and Lois’ granddaughter, Stephanie Heald-Fisher became manager in 1998. Lois died in 2006, five years after the Riding family decided to sell the golf resort. It was purchased by a group of local businessmen, including Dale Williams and Keith Bonville of Baileys Harbor and Dick Daubner of Sister Bay. Many improvements were made, but the real estate crash hit the project hard and it went into receivership in 2010.

“I’ve always admired Maxwelton Braes,” Jim said. “It’s got a rich history, and we’d like to keep that intact.” Many things have changed, but the charm and mystique of Maxwelton Braes remains.