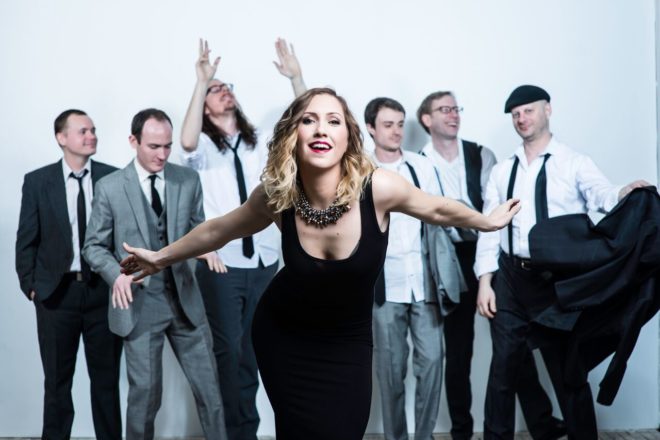 The Right Now will perform March 9 at Door County Fire Co. in Sturgeon Bay as part of the Celebrate Community Winter Concert Series.

The Right Now’s pop-meets-soul sound is more than a vehicle for Stefanie Berecz’s captivating voice. The celebration of thoughtful, catchy songwriting and intricate arrangements evokes a subtle sophistication in the tradition of Quincy Jones’s ‘70s and ‘80s masterpieces. Since 2008 The Right Now has toured much of the United States and released three acclaimed albums, racking up placements in television, national commercials, and the multi-million-selling video game Watch Dogs.

The Right Now’s Chicago roots permeate their music and performances:  breezy horn lines sit atop soul grooves old and new, all while Berecz elevates one audience after another with her “classic yet contemporary voice” (Philadelphia Inquirer).

The seven-piece band landed an official Record Store Day release in 2012 – all 750 copies sold out immediately – and collaborated with New York label Deep&Disco on a remix project. The newest album Starlight examines a complicated world through the eyes of the fighter, the lover, the philosopher, the addict, the mother. Starlight hit the streets in February 2017 to critical acclaim.